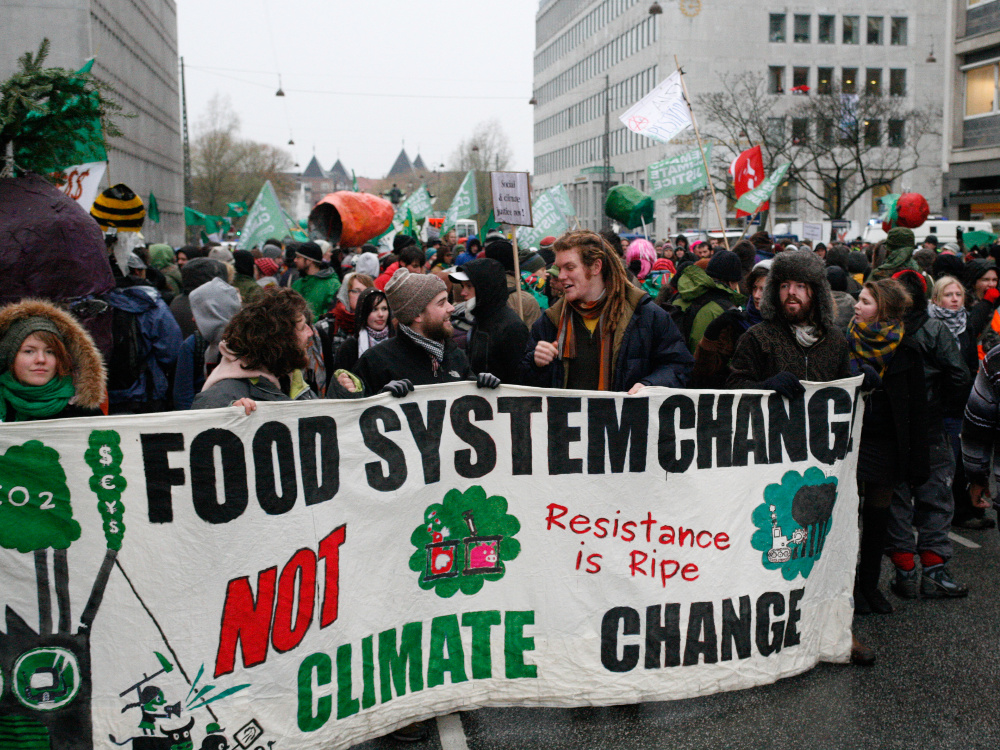 ** See a report of the action at Danone **
[Version française en bas / Scroll down for French version] During the COP21 Climate Summit in Paris December 9 is going to be the action day for “Peasant Agriculture and Food Sovereignty”. It was the international network of peasant organisations La Via Campesina who spread the call, which has since been followed by several other organisations and activists.

A Freez-In’ red line
ASEED and friends are organising a ‘Freeze In’ in front of the entrance of a company building or a business-event. This action will spread a clear anti-greenwashing message and is targeted at one or more large corporations involved in industrial agriculture that are not willing to radically change their emitting practices. Just like many other actions planned for Paris, this action will show a red line that corporations and delegations should not cross. On several topics the climate treaty will be compared with our minimum demands, and so red lines will be used more often during protests in Paris.
Our red line will focus on the devastating behaviour of industrial agriculture. Activists will represent the many victims of industrial agriculture and of the climate change caused by it. The group will freeze as a red line in front of the entrance. The companies on the other side of this line are the problem and visitors will have to decide if they want to cross this red line and become part of the problem or stay outside and join the alternative solutions we present there. This action can be done with a small group of people, but the more who join, the better. The exact form of the action will depend on the situation in the streets of Paris and on the amount of help we get from other organisations and people. So this also depends on your help and creativity!

Things are hectic at the moment and we want to be able to adjust the plans depending on the latest developments in Paris. The final decisions about the location and times of the action will be discussed and confirmed in Paris with all groups and people who would like to join the action. A preparation meeting is planned for December 6, 16:000-18:00 in the Art Space Jardin d’Alice (rue Garibaldi, Montreuil). A second meeting for the final detail and updates will probably take place in the morning of the 8th. The Art Space Gardin d’Alice is as well a good place to make banner and other materials and the place to stay updated about the latest developments in Paris. We hope to see you there! You can also send an email to climate@aseed.net if you want to receive more info about the ‘Freeze In’ action and the prep meetings. 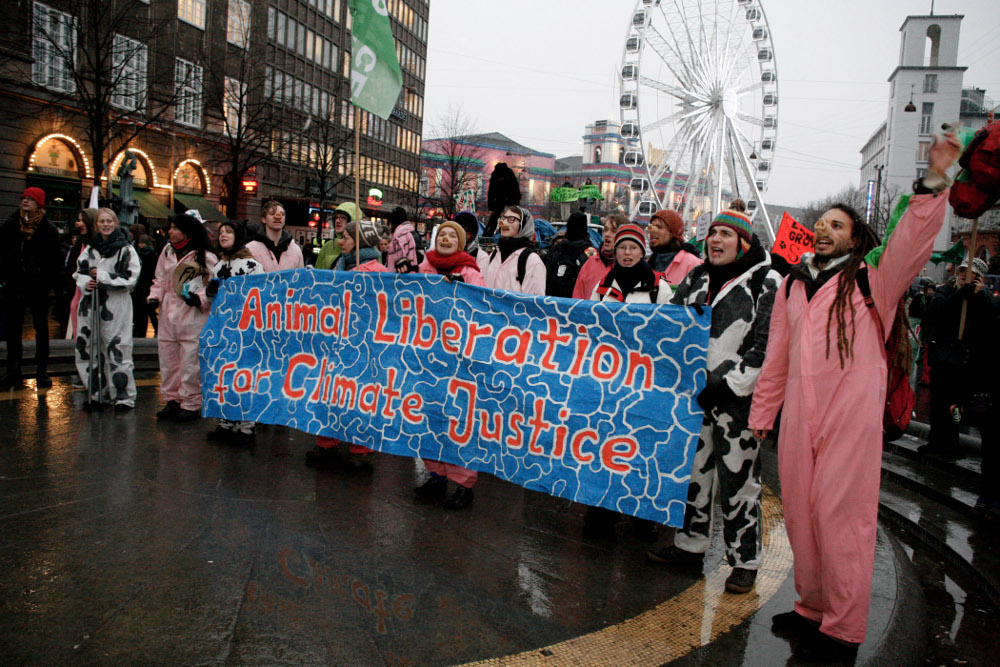 How industrial agriculture is heating up the climate
Climate change is hugely affected by the current industrial food system. From deforestation to fertiliser use, and from factory farms to supermarket shelves, producing, transporting, consuming, and wasting food accounts for between 44 and 57 % of all greenhouse gas emissions.
One of the main contributors is the massive production of meat and animal feed. This results in deforestation, monocultures and direct emissions from the livestock. Another large problem is the production and use of biofuels and biomass for transport and power plants. This ‘false solution’ is still promoted by companies involved in this business.
At the official climate conference ‘Climate Smart Agriculture’ is promoted by corporations and some governments (including the Dutch) as a way to make agriculture less polluting. But the term lacks meaningful criteria to define what is ‘climate smart’. The Global Alliance for Climate-Smart Agriculture is dominated by the artificial fertilisers industry and other large agribusinesses. For those reasons, it is clear that this is nothing more than an attempt to greenwash the current agricultural system. 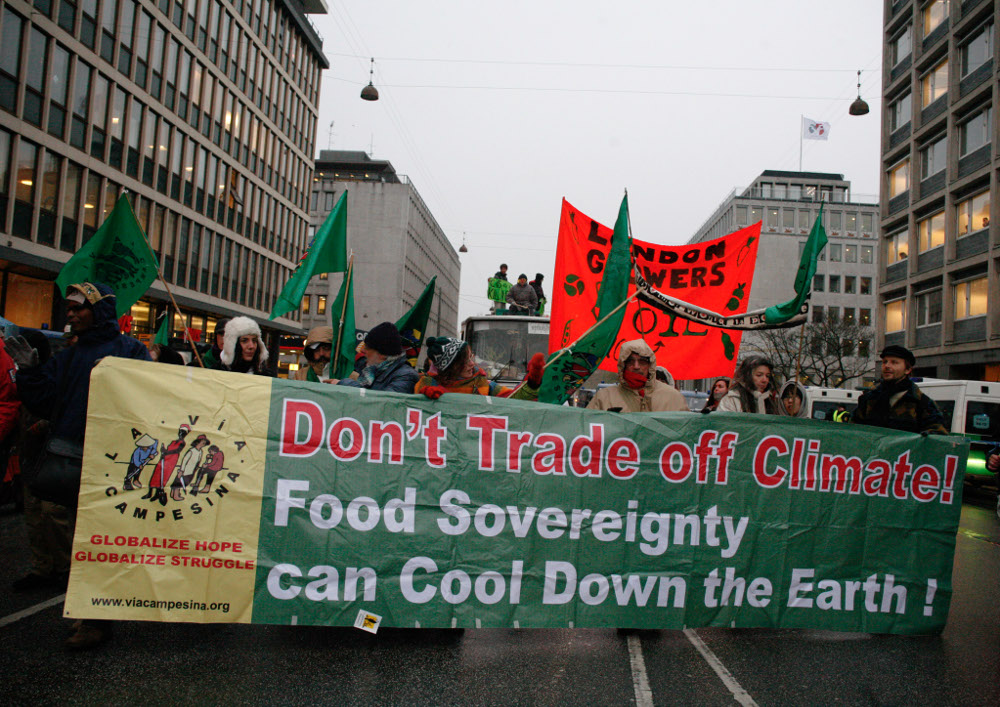 Agriculture can feed the world in a sustainable way
We don’t need industrial agriculture. Alternative methods are able to feed the growing world population and do so without contributing to climate change. To achieve this we have to switch to alternatives based on agro-ecological science. This includes reducing transport, improving the soil and stopping inputs of fossil fuels (artificial fertilisers, pesticides and machines use). Agriculture and food production should be based on social justice and take into account problems in Western Countries and the ‘Global South’.

ASEED published a flyer about the way industrial agriculture is contributing to climate change and on the possible alternatives: Countering Corporate Power and Fake Solutions at the Climate Summit. Although ASEED is focussing on the link between climate change and agriculture, we are supporting all activities trying to deal with the root of the problems and support climate justice.

More about this concept and the red-line topics.

This Freeze In action will be part of the Climate Games.

Link to the call for an action day by La Via Campesina.

All pictures on this page are taken during the Agriculture Action Day during COP15 in Copenhagen.