On 23 December, the Ghent Court of Appeal reached a verdict in the trial against the 11 activists who, in 2011, participated in the “big potato exchange” of Wetteren. The activists were acquitted of the charge of belonging to a criminal gang. The court ordered them to pay compensation to the ILVO and the Hogeschool Gent, which they have now done. Although the Flemish Institute for Biotechnology (VIB) and Ghent University had also hoped for compensation, the court did not order it to be paid, which is a positive note for the FLM. A farmer from their network explains: “The VIB has not directed its research to the benefit of farmers, consumers, the local economy or the environment. The ILVO is generally better suited to conduct this type of research”.

Given the fact that the development of GMOs in the past 15 years has neither benefited farmers nor the environment, the FLM calls upon the ILVO to support, with the compensation received, solidarity-based sustainable agroecological agricultural projects, , which could for example benefit young farmers in their set-up process. The project could focus on soil fertility, functional agricultural biodiversity or improving organic plants at farm level.

As for the acquittal on charges of criminal conspiracy, this is a resounding victory for organizations, lawyers and activists who opposed the original conviction. The Ghent Court has confirmed that the actions of civil disobedience, even if they involve damage to property, cannot be criminalized. It is a legal precedent importance for all social movements, organizations and unions.

“Are there still criminals in the room?” asked the friends of the FLM after the acquittal in an open letter to Kris Peeters, Prime Minister of the Flemish Region and Minister of Agriculture at the time of the action, who had called for a conviction for being a member of a criminal gang. “You should understand: your representative democracy has expired. Citizen participation is not real. The potato swap is a warning! Because with or without you, Mr Peeters, it is time for political innovation” they concluded.

The Flemish government still allows non-democratic experimental GM fields. So this spring, a new experimental field will be initiated, planted this time with genetically modified maize. Such field trials will also be put to the test: the enthusiasm of the 400 participants in the action, the 100 voluntary defendants, the many participants in the days of trial and those who supported the movement in several ways over the past three years is too big for it to be otherwise.

The FLM will continue to support societal initiatives in favor of sustainable agriculture. Whether this is done through direct actions of civil disobedience or practical examples, if the projects promote public debate and increase knowledge, they can count on our active support. We are already preparing for the next action.

Link to the open letter in FR here.

See the orginal article on the FLM website here. 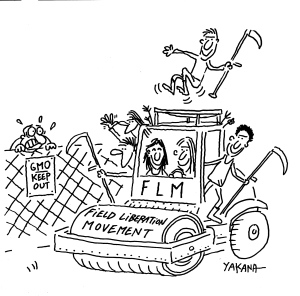