ASEED was established by young engaged people in 1991 in response to the UNCED Earth Summit proceedings in Rio de Janeiro and aimed to forge alliances among young people committed to social and environmental justice.

Since 1992, the ASEED decentralised network grew and regional “hubs” were created in Europe, Asia, North America, Africa, Latin America and Japan. Each hub had its own level of activity, linking youth groups and individuals in their region. By now each hub has developed in its own way, working independently from eachother. To read more on ASEED Europe’s work in the past you can check out our archive of old campaigns.

Currently, ASEED Europe continues its mission with around eight volunteers, paid staff, and interns in an office in the Dokhuis in Amsterdam. Our work is embodied within the Fossil Free Agriculture campaign, which involves raising awareness, direct action, and supporting small-scale farmers. Feel free to explore the vision and current projects of this campaign further. Throughout our work we strive to follow our safer space policy and use intersectionality as a lens for all of our activities. This is an ongoing process of learning.

To sum up, we work together with many contacts throughout to: 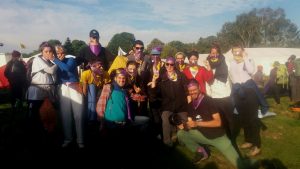