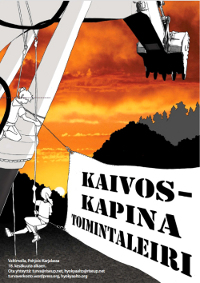 Also this summer there are many places to camp in an active way. And with the diverse themes there is something for every’s choice. And yes, you can go on a cycling holiday as well.[:]

Resistance to the Nordic Mining Boom ( Action Camp)
Starting 18 June 2013. in Finnish North Karelia
Talvivaaras’ nickel-uranium mine has caused the most serious environmental damages in the finnish history in decades. The mine has been continuously polluting the amazing waterscapes of eastern Finland. More and more people and organizations are demanding closing of the mine and the locals can’t use water from several lakes anymore, but it doesn’t seem to have any impact in a country where the finance elite knows that the government is in their service. Determined resistance is needed to keep the environment viable. Join us to share knowledge and skills, and to act!
Meer info on https://turvaverkosto.wordpress.com/karelia-action-camp-2013

Ecotopia Biketour 2013 – Beyond Borders
July 12 – September
Ecotopia Biketour is for anyone interested in do-it-yourself, environmentalism, activism, community life and experiential learning, from cultures, from challenges, and from each other. The tour start from and will end in Romania. En route the group will visit and connect with projects, action camps and campaigns dealing with the long-standing Biketour themes of D.I.Y; De-growth; sustainability; along with campaigns more connected to this year’s focus of ‘Beyond Borders’
More about the route, practical info and the theme ‘beyond borders’ on the website: http://www.ecotopiabiketour.net

Reclaim Power Biketour
July 21 – August 23 – through Germany and maybe a bit of the Netherlands
Forest occupations, train blockades, new groups against Fracking and CCS, protests against coal imports in Hamburg: The climate movement has got going! In the summer we will speed things up: We are going to connect hot spots of energy struggles with two great bike tours. Both will end at the Climate Camp in Rhineland (23 Aug – 01 Sept).
More on : http://reclaimpowertour.org and http://klimaschutzvonunten.blogsport.eu

War start here – anti  militaristic action camp
July 21 – 29 – Altmark (Germany)
After the successful attempt last year, there will be another international camp to discuss and take action on international and anti-military matters. Like last year, the camp will be located at a military training village (Gefechtsübungszentrum / GÜZ) near Magdeburg.
More info on: https://www.warstartsherecamp.org 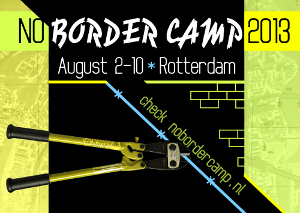 NoBorder Camp Rotterdam
August 2 – 10 – Rotterdam
The Dutch No Border Network organizes a militant week of action, discussion and workshops connects with the tireless actions of migrants in the Netherlands during the past one and a half year.
More on: http://nobordercamp.nl/English 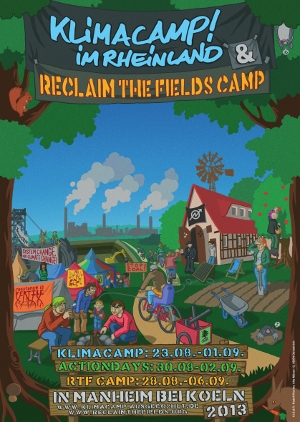 There is going to be a climate action camp in the Rhine-land in Germany. There will be actions against the open cast mining and power plants. This whole region will be destroyed by them (if action don’t help). Also other causes of climate change will get some attention during this week of action.
More on http://hambacherforst.blogsport.de

Actiekamp Reclaim The Fields
August 28 – September 5 – Hambacherforst (nabij Aken en Keulen)
There will be take collective direct action against against the open cast mining in Rhineland. Furthermore there will be a program including different practical and theoretical workshops, discussions and a lot more. On the background of the struggles in Rhineland we want to facilitate an exchange of dissident knowledge and action. With collective learning and discussion as well as practical activities to exchange knowledge and skills and to resist in the Rhineland.
More on http://www.reclaimthefields.org/nl/node/449

Do you miss interesting action camps in the list above? Let us know.