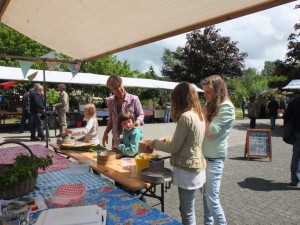 On 22nd and 23rd June ASEED was at open farm days as part of the ‘Lekker naar de Boer’ nationwide public event to celebrate organic farming.

We handed out free GM free potato snacks with a campaign stall at two different agricultural locations in Flevoland as part of our ‘Gentech Friet Eet Ik Niet’ campaign.[:]

On Saturday we were hosted by a biological seed farm in Emmeloord, ´Biologisch Dynamische Zaadteelt BuitenBant´, where many people from the community came to enjoy acoustic music, locally produced good food and see the farm site. The variety of stalls ranged from handmade soap to micro plant irrigation systems and many in between. A lot of young people and children from the community contributed to the friendly festival atmosphere.

Then on Sunday we enjoyed a day in Lelystad at the Centre for Organic Agriculture where we talked to many visitors who had come to join various activities and tours of the loca, organised by the centre. Some people picnicked in spite of the rain and everyone had a good look around the many stalls from local farmers and craftspeople.

The Lekker Naar de Boer is an annual event which offers opportunities for the public to tour open farms and see their different functions, such as how organic products are made, as well as the chance to vote for ´Favourite Organic Farmer of the year´.