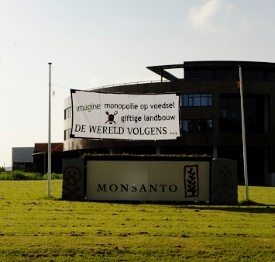 At the moment the Monsanto Tribunal is being organised, and also people from ASEED are involved in this. From over the whole world individuals and groups will explain how they became a victim of the activities from Monsanto and in which ways this company violated local, national and international laws. Retired judges will see if Monsanto’s activities worldwide are illegal according to several national and international laws. A conviction will generate more bad publicity for Monsanto and hopefully this will result in some juridical action at real courts.

But for ASEED it is obvious that Monsanto is doing very objectionable things. For this our own ethical standards are more important than official laws and regulations. Monsanto’s main activities are at the expense of the environment and many people. And they are so big and powerful that it is hard for communities to defend themselves against this company. For this reason ASEED has been doing several actions against Monsanto in the past years. And probably we will go on with this, independent from the outcomes of the Monsanto Tribunal. 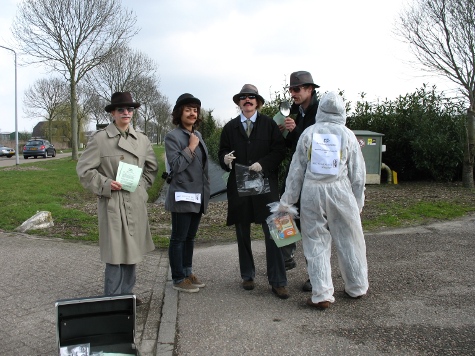 On March 27, 2010 a CSI Crime Seed Investigation unit visited several greenhouses in Flevoland at the national event ‘Come into the Greenhouse’ visualising what the future may look like: worlds largest seed company Monsanto will check growers for the presence of suspicious crops, prevent them from using patented seeds or accuse them of patent breach. With this action ASEED wanted to draw attention to the international campaign ‘No Patents On Seeds’ against applying patent law on seeds and animals. 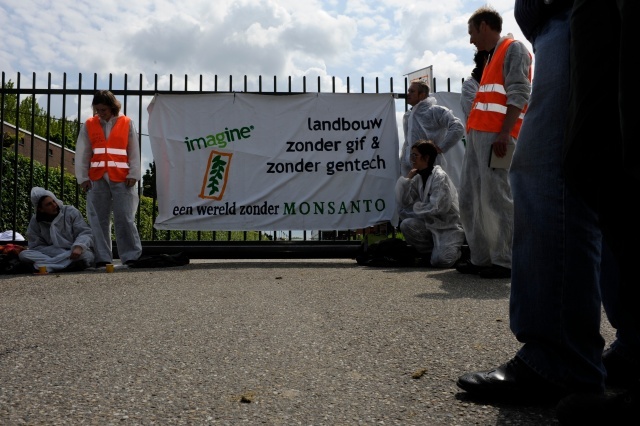 Successful blockade of Monsanto in The Netherlands (May 2010)

On May 17 2010 about 40 persons of the action group ‘Roundup Monsanto’ blocked both gates of the Monsanto seed company in Bergschenhoek (near Rotterdam). ‘Roundup Monsanto’ wants Monsanto to back out of the seed market, and demand an end to patents on seeds and living organisms. Monsanto and other agro-chemical multinationals are lobbying the Dutch government and the EU for legislative changes that would make it easier for large companies to take control of the seed market and food production.[1] The blockade took place at the former De Ruiter Seeds, acquired by Monsanto in 2008, where research laboratories, offices, greenhouses, and a central storage for seeds and seedlings are to be found. 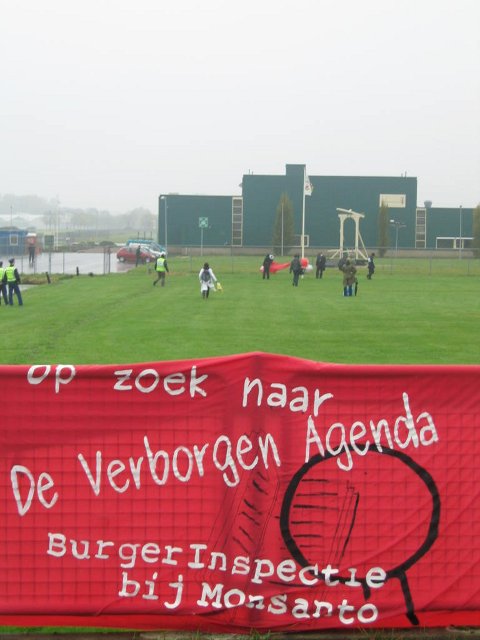 On November 2nd 2010 around thirty climate conscious citizens paid a visit to the main premises of international agri-chemical giant Monsanto in Enkhuizen in the Netherlands. The aim was to find clues about the company’s hidden agenda. Their suspicions were aroused by the company’s new claims to feed and fuel the world, which somehow do not match Monsanto’s current atrocious human rights and environmental record. 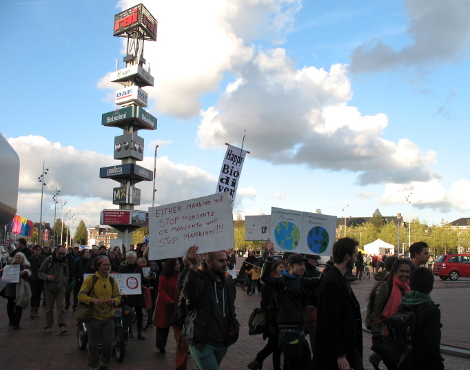 March Against Monsantos – For an agriculture without Monsanto, Bayer and other poisoners (October 2013)

On Wednesday October 30 (2013) 200 people were demonstrating at the RAI Congress Centre in Amsterdam against the chemical industry that was present there at ‘Cropworld Global’. This is a yearly meeting of the large producers of pesticides. Those companies are responsible (amongst others) for poisoning people and nature. The use of their insecticides contributes to the dying of the bees. Known names are Monsanto, Bayer, Syngenta, BASF and DOW, also many unknown companies, often from China, joined the congress. 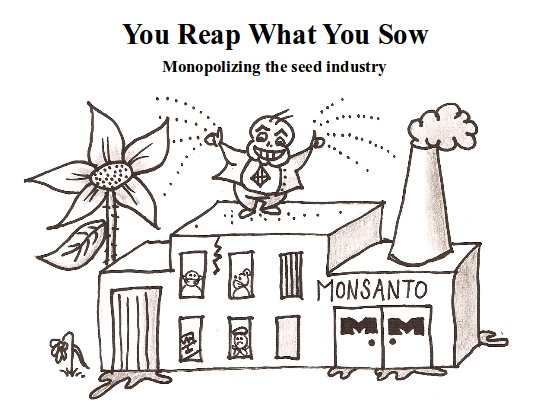 In 2010 ASEED published a brochure on Monsanto: ‘You Reap What You Sow – Monopolizing the seed industry’

The influence of the large corporations on the global food production is growing fast. The global seed market gives a clear indication of their power, with market monopolies for ever fewer multinational biotech corporations. As new European biopatents legislation and agriculture policies are taking shape, the global corporations are quietly taking over the European market. This brochure takes a look at the current state of affairs in Europe and the Netherlands, and examines the implications for the future of food and farming as we know it. The brochure is available in English and Dutch. [Some figures will be a bit outdated by now and there are some new developments regarding the EU seed legislation, but the text is still worth reading.]