On September 16, 2010, coinciding with the conference on European GMO free regions at the EU parliament, a workshop by the Faucheurs Volontairs (Voluntary Field Liberators) took place outside, on the Place du Luxembourg, under the watchful eye of the police.… verder lezen

Mother Earth is a very inspiring documentary by the Dutch filmmakers Paul Enkelaar and Jan Paul Smit. Central theme of this documentary is the development of small-scale organic agriculture in Andhra Pradesh, … verder lezen

On Tuesday the 20th of July patents and patent applications on sunflowers, melons, broccoli, cows and pigs went up in smoke as demonstrators outside the European Patent Office (EPO) in Munich used their truly innovative Patent Burner. Several hundred individuals and representatives of farmers organisations and NGO's from around the world gathered to protest against the EPO and against the patents the EPO are issuing on plants and animals. That day was the start of the hearing by the highest EPO Board of Appeal. Subject of the hearing are controversial patents on conventionally bred broccoli and wrinkled tomatoes.… verder lezen 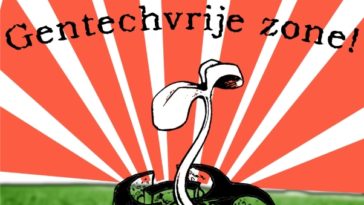 In 2009 ASEED organised a conference on GMO free zones in the Netherlands together with Greenpeace and organic chain organisation Bionext (then still called Biologica). A reader with backgrounds and a report … verder lezen

"Patents on Seeds – The Turning Point" will take place in Munich, Germany [1]. Researchers and representatives from farmers and civil organisations  will discuss current trends regarding patents on seeds and animals, highlighting the negative impacts of the current system, the changes that would be needed and possibilities for effecting those changes. The conference is initiated by the European coalition No Patents on Seeds, which consists of NGO's that have united to call a halt to the ever expanding privatisation of life. On Tuesday July 20th No Patents on Seeds ha organised a large manifestation at the European Patent Office.… verder lezen

In 2008 A SEED's GMO free zones campaign in the Netherlands has published a Dutch reader with background information. Find out how to consume GMO free, how to campaign on your local … verder lezen

The Bike Caravan against GMOs and for an autonomous, local and ecological agriculture will travel in Switzerland between 19th and 27th of June 2010 from Pully to Reckenholz. Check out their website Www.caravane-anti-ogm.ch and click to continue to their call….… verder lezen