Letter to the Permanent Parliamentary Commission for Economic Affairs in advance of the debate regarding the European proposals. 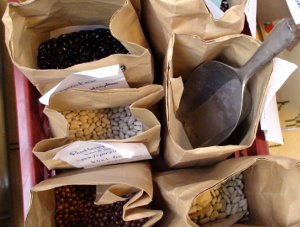 In may 2013 the European Commission brought forward proposals for new European seed legislation. Many organisations that promote sustainable agriculture, including ASEED, opposed to the proposals at that time. The proposed legislation supports the interests of the largest companies, while creating obstacles for small scale farming. The proposal is also harmful for the biodiversity in agriculture (agrodiversity). But we have not lost the race yet. The European Parliament will not discuss or decide about the proposals until April 2014 and the approval of the European Council is also needed to pass this new legislation.[:]This means that the Dutch government will also have an opinion on the proposals. This coming week the proposal will be discussed by the Permanent Parliamentary Commission for Economic Affairs (yes, this commission has say about seeds and biodiversity as well). ASEED, Cityplot and Bifurcated Carrots want to let the members of the Commission know what they think of their proposals:

Dear Commissioners and Members of Parliament,

On September 18th the Permanent Parliamentary Commission for Economic Affairs will discuss the proposals regarding European legislation on allowing seeds and other plant reproductive material.

In these proposals new impediments are being created for the remaining agrodiversity of crops, while the power of the large producers of industrial seeds is reinforced.
Earlier this year, in June, the Parliament voted unanimously in favor of a motion that states the Dutch government will not accept proposals that will threaten agrodiversity. But the degradation of agrodiversity is exactly what the currently proposed legislation will bring about.

Since the Netherlands are playing a big role in the seed industry, we ask you to carefully and critically examine the European proposals. The proposal in its current form is not acceptable.

In the Netherlands and other European countries there is pressure on governments from seed-savers, organic farmers and others, for the government to reject the European proposals. This network are pushing for a set of  minimum standards which the new regulations must meet in order to be able to protect the old and special regional crops for the future. We support these demands, which are as follows:

The original goals of the law should not be forgotten. The objective was to increase food safety in Europe, the very reason DG SANCO wrote the proposal for the European Commission. Another important mandate of the European Union is to protect biodiversity, also in agriculture. The largest part of the proposed law however is not about this at all. The exchange and use of ‘free’ or ‘special’ seeds is not a threat to food safety, and the regulation is especially harmful for agrodiversity. The proposal seems to be mainly focused on the safety of the largest companies’ interests, at the expense of small-scale farmers. We do not believe the European Union needs to favor such a proposal.

The race-lists of agricultural crops are a threat to biodiversity. It is expensive, tricky and sometimes impossible to get and keep varieties on this list. What is not listed is under threat of extinction. Registration and testing procedures should not be disadvantageous for (genetically diverse) varieties. The The DUS-criteria (Distinctiveness, Uniformity, Stability)  are applicable to industrial varieties, but not to robust, traditional varieties for which genetical diversity within the populations is a requirement for the adaptability of the crop. Crops that have developed their capacity to withstand unstable and changing climatic conditions have an important function in sustainable agriculture of the future, that will be able to deal with climate change. In their current form the propposed regulations are damanging the sustainable organic farming sector.