March 18 is rapidly approaching. On that day the European Central Bank will inaugurate its’ new, 1,3 billion costing skyscraper. The activists united in *Blockupy* will seize that moment to clarify there is no reason to party.

On the contrary, it is reason for resistance. Which is why the inauguration party will be blocked. In the early morning on the 18th thousands of people will move to the ECB in Frankfurt to occupy the access roads and this way try to block and take over the party. Next to the Blockupy coalition militant organizations are calling on their constituency to come and party in Frankfurt (destroika) as well as anti-capitalist and anti-authoritarian groups united in M18.

Also antimilitarists and people against war organizations (http://blockwar.tk) and the opposition against the TTIP free trade agreement between the EU and the USA  call on their constituencies to take part in the anti-ECB-actions.

Dutch activists will participate in the protest. Transport by bus to Frankfurt will be organized and in the run up several information and training gatherings will take place in Utrecht, Amsterdam and Nijmegen.

Continue reading in Dutch on globalinfo.nl (from which site we’ve copied this text), or search for some similar info another language. 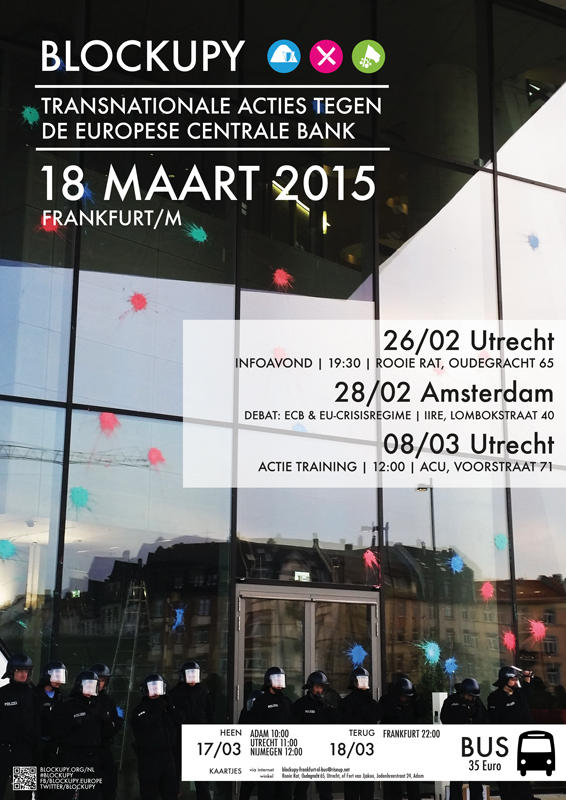