On the 12th of December, French president Emmanuel Macron gathered international negotiators in Paris for the One Planet Summit. Exactly two years after signing the Paris Agreement, the idea was to celebrate this achievement and go further in tackling climate change. The summit has been organised by the United Nations and the World Bank, to encourage banks and companies to finance sustainable projects and stop funding fossil fuels, for example.

The main outcome of this One Planet Summit is the the World Bank announcing it will no longer finance upstream oil and gas after 2019. As a reminder, the current amount of money provided by the Bank for oil and gas projects represents about between 1 and 2% of the Bank’s 280bn$ portfolio. Nevertheless, in some countries (the poorest ones) the Bank will continue to offer lend for oil and gas project if there’s a lack of energy. So, the declaration itself looks nice, but it doesn’t represent a lot of investments and the Bank reserves the right to continue to fund fossil fuel projects.

We can also stress the announcement of the French bank “AXA” to cut investment in exploitation of the oil sand projects, or the commitments of local leaders in the United States to counter Trump’s administration.

To remind to the negotiators what the civil society was expecting of this political meeting, a group of NGO gathered in front of the Pantheon monument, early in the morning. The mass action was called “Not A Penny More”, and aimed in encouraging both public and private sectors to stop financing “energies of the past”. Some of us participated in this artistic demonstration, presented as a metaphor of the fossil fuels energies thrown away in a big dumpster to give way to alternative energies. The location was also rather symbolic and encouraging, as the Pantheon’s pediment mentions “Aux grands hommes, la patrie reconnaissante” (“to great men(women), the grateful homeland”). 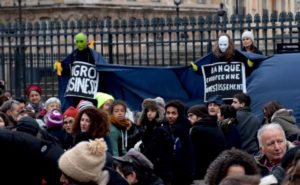 The banners and slogans claimed were clear: the population want a fossil free energy for sure, but is also campaigning against GMOs, fake solutions and greenwashing, nuclear projects… Lots of European current ecological issues found also a heavy support there: Bure (site selected in France to be nuclear waste storage), Hambacher Forst (threatened by lignite mine expansion in Rhineland, Germany) or Notre-Dame des Landes (airport project in the West of France) were mentioned.
A great image to remember from this protest is being part of activists, standing up with nice banners and strong messages, in front of the Pantheon and facing the journalists. This was also the opportunity to spread more of ASEED stickers “This company is as green as this sticker”, which fit well on ”Carrefour Bio” windows.

Seeing the overview of the One Planet Summit day, it was definitely important to loudly state our expectations. At the end of the day, medias reported green finance decisions, but how sustainable are they?
The Paris Agreement was merely formulating new objectives (the famous 2°C), so the stated goal of this anniversary day was to implement concrete tools to deal with global warming for real. However, this new step after the Paris Agreement (and the COP22, and the COP23,…) is very incomplete as well. First, the politicians are still dealing with climate change in a non-binding way. No legal tools have been implemented yet to sanction the “bad students”. Secondly, none of the Tuesday’s propositions mentioned transparency and monitoring. is it worth the trouble to gather all these investors and businesspeople, and encourage them to make statements, while nothing is planned to ensure their commitment?

The French green party is definitely regretting the “talk the talk” which happened during the summit. Thirdly, most of the measures proposed are part of the adaptation solution, as can testify the new plan of the Bill and Melinda Gates Foundation shows. Indeed, they are talking about helping poor farmers to “better adapt to increasingly challenging growing conditions brought about by climate change”. Impressive speeches showed us that the politicians are globally aware that time is running out, and is planning to adapt situations to climate change. But it is still time to mitigate ! What about tackling climate change before it ravages the planet?
Finally, ASEED members are still profoundly frustrated concerning the lack of genuine interest agriculture. Energies were undoubtedly the main topic of the discussions, and if we go deep in the agriculture matter, we find the same fake solutions than at the COP23 : “climate-smart” agriculture promoting new technologies. One blatant example would be, again, the Bill & Melinda Gates Foundation (the Gates’ family seems to be our daily enemy). Indeed, their silver bullet consists in GMOs funding in Africa and Asia. According to the Foundation, “there is an urgent need to equip [the poor farmers of developing countries] with the tools that can make their crops more productive, sustainable, and resilient in the face of a rapidly changing environment”, and that’s why they announced they would give $300M over the next three years to support agricultural research. But this is highly disconnected from the wish we (and the poor farmers themselves) have to move towards a sustainable food system. Indeed, non-profit organisations published lately scientific studies showing that it was doable under conditions to feed the whole world in organic culture. It basically means without using GMO’s, pesticides, chemicals, monoculture, patents and large corporations domination.
Why, whereas the civil society is striving to show how an alternative food world is possible, world leaders are still supporting non-sustainable solutions?

From the “black gold” to the “green growth”

Moreover, this Summit is symptomatic of the global political and economic system ASEED is denouncing. Heads of state, presidents, C.E.O., lobbyists… ect gathering in a city (let’s avoid focusing on the logistical aspect this time that we could also criticize) to announce how good they are for the environment, and how good are their intentions for the future. These summits are rather the paradise for demagoguery and greenwashing. For instance, if Macron’s highest priority was protection of the climate, why didn’t his government started with laws regarding climate change ? The CETA is still going to be implemented, knowing the dangers for the French agriculture, and consumer. 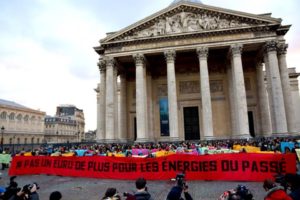 More than the little outcomes of this Summit, ASEED would like to hail the fact that, this Summit finally shows to everyone the way banks and financial sector are involved in Climate change. It also shows that in these Climate Summit (we could mention the COP too) the planet’s health and our own health is only seen through the lens of investment/funding/reinvestments/finance/subsidies ect… We would like to highlight once again this pretty paradoxical situation, where the economic system that created so much troubles are now trying to sell us the solution. The same banks and companies that invested massively and for years in fossil fuels because there were a lot of money to be done, are now afraid of financial risks (rather than the destructive consequences). They are now in the situation where they need to find new markets. This is what is called the “green growth”, a economic model on trend, based on quick and easy solutions. For instance the bio-fuels to deal with the problem of the fossil fuels. This green growth was in everyone’s lips at the One Plante Summit and could become the new myth on which every political and economical project is going to be built. A green growth which doesn’t protect the planet and the people but only the bank’s money.