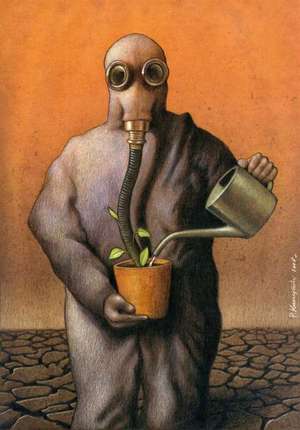 GRAIN, a research organisation specialised in agricultural issues, published a critical text about the so called Climate Smart Agriculture. Although presented as a way to feed more people and to deal with climate change, this concept is mainly used by fertiliser companies and other large agribusinesses to continue with the current energy intensive industrial agriculture and to ignore the call for a more sustainable agro ecological food system. The Dutch government and Wageningen University are actively promoting Climate Smart Agriculture as well. This goes well together with promoting the high-tech agriculture in the Netherlands and the Dutch companies involved in this.
The current promotion of Climate Smart Agriculture is a good example of the corporate greenwashing attempts on the road to the UN Climate Summit in Paris at the end of this year.
Together with many other organisations and activists ASEED will reveal the true face of the fertiliser companies and promote the real climate friendly, sustainable alternatives.

It goes without saying that oil and coal companies should not have a seat at the policy table for decisions on climate change. Their profits depend on business-as-usual and they’ll do everything in their power to undermine meaningful action.

But what about fertiliser companies? They are essentially the oil companies of the food world: the products they get farmers to pump into the soil are the largest source of emissions from farming. They, too, have their fortunes wrapped in agribusiness-as-usual and the expanded development of cheap sources of energy, like shale gas.

Exxon and BP must envy the ease their fertiliser counterparts have had in infiltrating the climate change policy arena. World leaders are about to converge for the 21st Conference of the Parties (COP21) in Paris in December, but there is only one major intergovernmental initiative that has emerged to deal with climate change and agriculture – and it is controlled by the world’s largest fertiliser companies.

The Global Alliance for Climate Smart Agriculture, launched last year at the United Nations (UN) Summit on Climate Change in New York, is the culmination of several years of efforts by the fertiliser lobby to block meaningful action on agriculture and climate change. Of the Alliance’s 29 non-governmental founding members, there are three fertiliser industry lobby groups, two of the world’s largest fertiliser companies (Yara of Norway and Mosaic of the US), and a handful of organisations working directly with fertiliser companies on climate change programmes. Today, 60% of the private sector members of the Alliance still come from the fertiliser industry.

Read the full article, including all notes and links to sources, on the GRAIN website or as a nice PDF document.