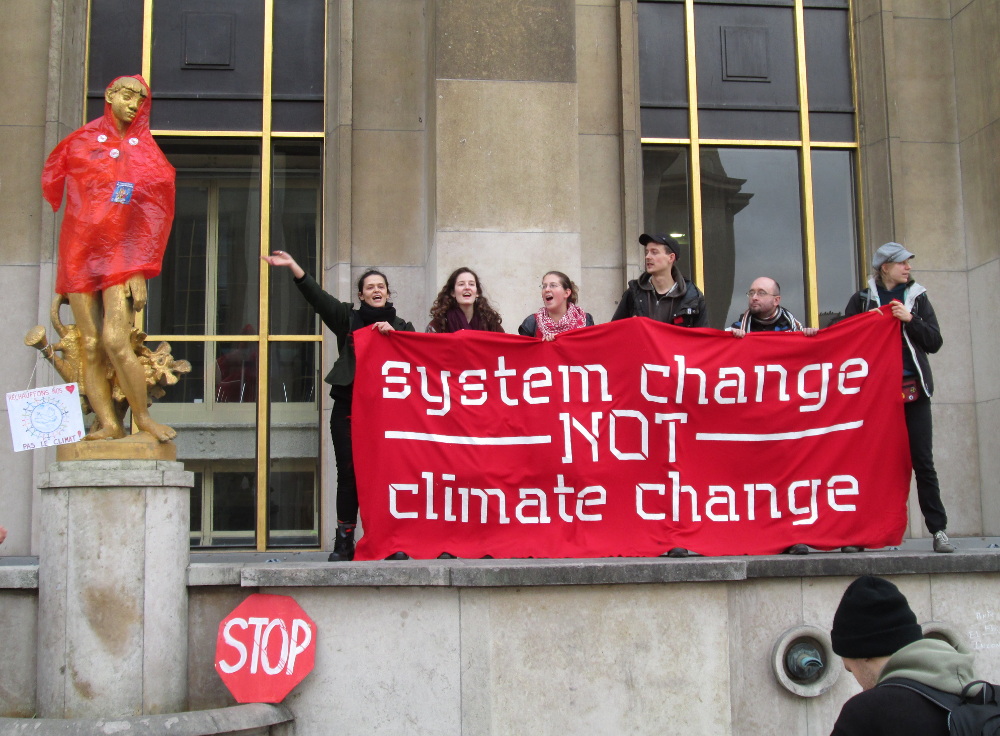 On December 12th, a new agreement has been signed at the UN Climate summit after a day of delay. Unfortunately, nothing concrete has been agreed upon. The words ‘fossil fuels’ and ‘agriculture’ do not even appear in the  31-pages treaty text. Countries pledge to limit the temperature rise to 2 degrees and shall endeavour to keep it below 1.5 degrees.

With their endless talks and extended meetings, the negotiators have in a way prevented the D12 activists from having the last word. In the morning, the Friends of the Earth network did an action where people walked to a set destination to form the words “Climate Justice Peace” on a map thanks to GPS transmission.  At 12 o’clock the red-line action started to show that governments and corporations are crossing “red lines” and do very little to address ecological and social problems. The avenue de la Grande Armée was supposed to be blocked to show that COP21 is not the end of the climate debate and that actions would continue against emissions and pollutants. As the action was publicly announced, the police had already closed this very busy road themselves. It was a big peaceful demonstration. At 2 o’clock, thousands of climate activists gathered at the Eiffel Tower. In total, despite the intimidating state of emergency, about 15 000 people participated in the different activities. 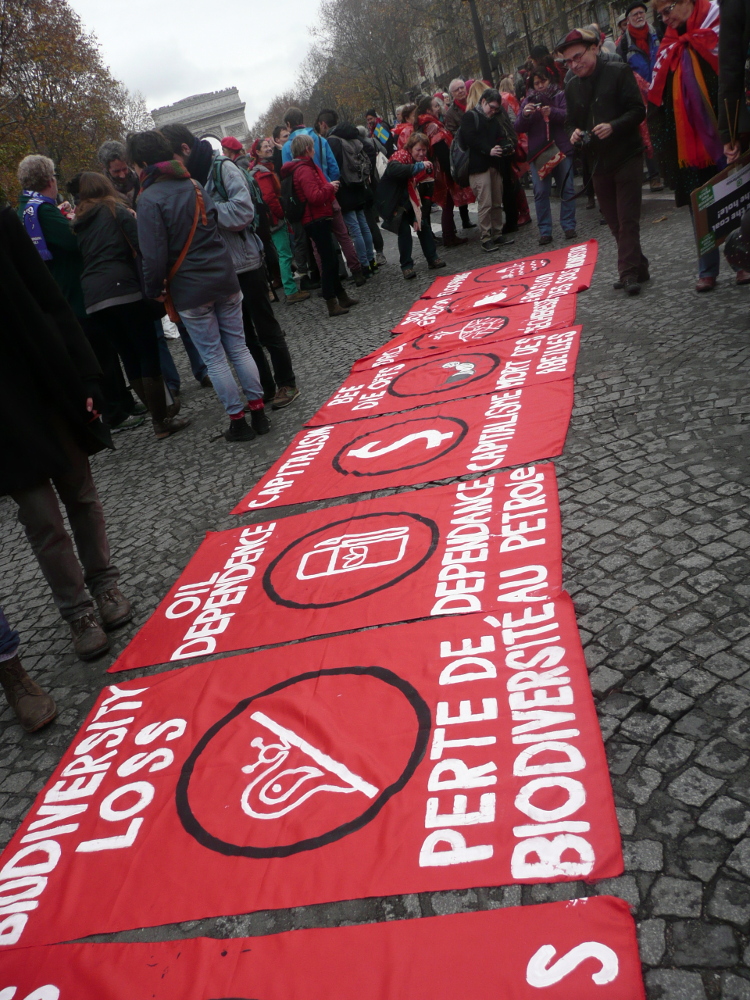 The treaty negotiated by the delegations is very weak. It was maybe made with good intentions but does not include no binding measures that governments will have to abide by. Although many media have written about this treaty as a step forward, there is much criticism. Friends of the Earth puts it as follows: “Responsibility and compensation for the cost of climate disasters are excluded from the agreements. This is more a curse than a blessing for poor countries, who will have to bear  the cost of climate change-related disasters such as floods, desertification or droughts.”

In another reaction, Greenpeace reports that “The aspirations of all countries together do not go far enough to keep global warming below 1.5 degrees. There is not enough done for the countries on the frontline of climate change[…]. The countries that have caused this problem put to little on the table to help the people who are already feeling the effects of the climate crisis.” said Faiza Oulahsen.

The former scientist of NASA, James Hansen, criticized the conference and the outcome: “It’s a fraud really, a fake,” he says, rubbing his head. “It’s just bullshit for them to say: ‘We’ll have a 2C warming target and then try to do a little better every five years.’ It’s just worthless words. There is no action, just promises. As long as fossil fuels appear to be the cheapest fuels out there, they will be continued to be burned.”

The World Resources Institute (WRI) offers a more positive (and highly optimistic) evaluation of the agreement in the article “The Paris Agreement: Turning Point for a Climate Solution“. It’s overview of the key provisions, is however somewhat insightful. The WRI also provide a description of the ‘Ambition Mechanism’ established at COP21, which is an ongoing, regular process to increase action by all countries. 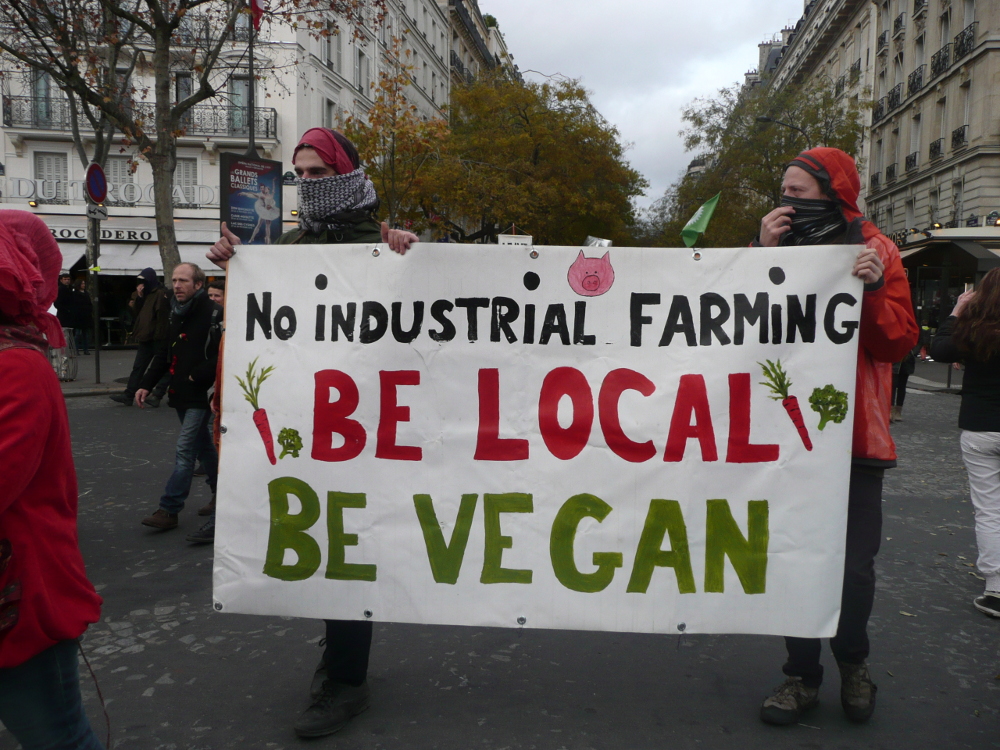 During the talks inside the conference centre the role of agriculture as big emitter of greenhouse gasses was mentioned. This didn’t result in any serious proposal to reduce the production and consumption of meat and to stop the use of artificial fertilisers. Nor did it stop the deforestation for new farmland and monocultures. The presence of large agribusinesses inside at conference already made clear that we couldn’t expect such an outcome and we are not surprised that agricultural practices and food production and consumption are not at all mentioned in the Paris Climate Treaty. Paul Watson, the big boss of Sea Shepard comments on the lack of attention for the meat industry and, in line with this, on the climate unfriendly catering at the summit: “The issue of animal agriculture was not only ignored, the food concessions at the events contradicted that concern 100%. Serving fish and chips during an ocean forum and hamburgers at forums dealing with greenhouse gas emissions was a disconnect that was painfully obvious. You would think the delegates and the NGOs could have weathered a meat free two weeks considering that the animal agriculture industry slaughtering 65 billion animals a year produces more greenhouse gas emissions than the entire transportation industry.” 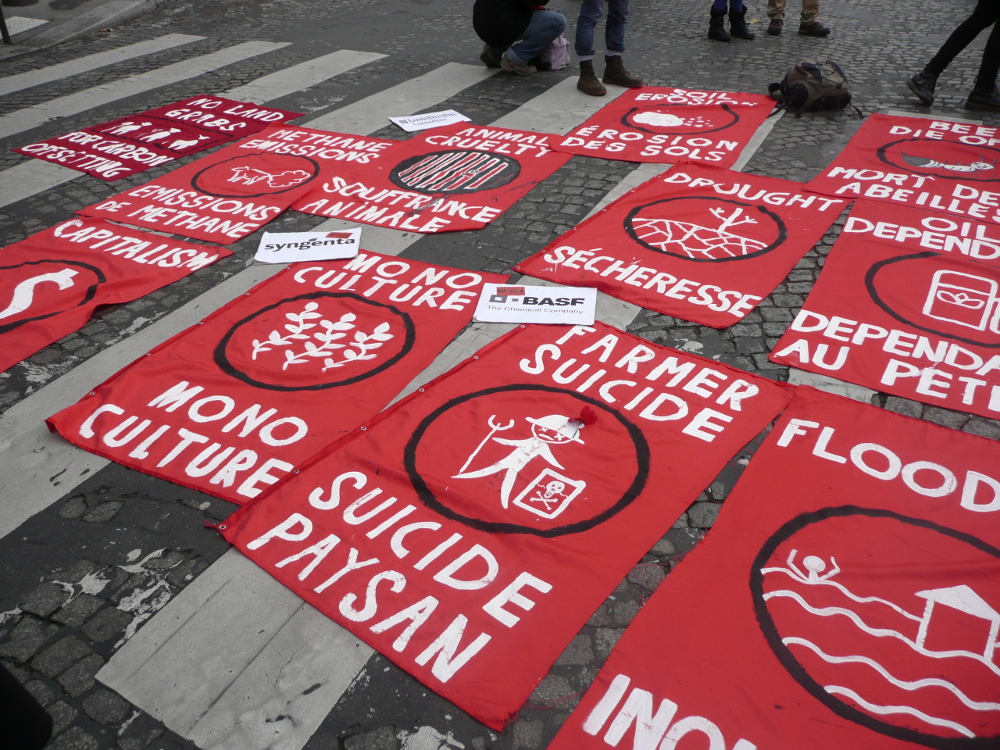 Frank Rijsberman, CEO of CGIAR (a consulting group for international agricultural research and involved in the often criticised Global Aliance for Climate Smart Agriculture) is more positive and praises the attention for agricultural in the climate negotiations: A recent CGIAR analysis of the first 150 country climate commitments (INDCs) submitted ahead of the UN climate talks revealed that countries appear to prioritize agriculture more than the negotiations have. 80% of commitments included agriculture in mitigation targets, and 64% included agriculture in adaptation strategies. Willingness to address agriculture and food security finally appears to be having some impact. As Tim Grooser, Climate Minister of New Zealand put it: “After many years of banging my head on a brick wall, trying to get attention for agriculture in UNFCCC, we are finally being heard”. Despite this, the role of agriculture failed to have a big place in the agreement formed in Paris. Rijsberman believes it has paved the way for more progress to be made in Marrakech at COP22, next year, via scientific (SBSTA) meetings held in Bonn in June 2016, however others feel that it is all a bit too little too late.

Nice all this attention for agriculture, but the proposals from CGIAR, New Zealand & Co. are mainly a continuation of the current problematic industrial food system. Here you find a short selection of initiatives discussed during COP21. Many of them are actually recycled mechanisms from earlier meetings on climate and agriculture, the results of the talks in Paris can be relevant for the future policy and practices, though.
* 4/1000 Initiative – Soils for Food Security and Climate. This is actually a promising initiative; each year the amount of carbon in the soil should rise with 4 pro-mile. This is improves the soil and the agricultural production and reduces the amount of CO2 in the atmosphere. Something to take care of, is that this positive effect is not sold on carbon markets to compensate the continuation of dirty industries.
* Life, Beef, Carbon – Towards Low Carbon Beef Farming . Beef production is one of the most polluting activities in agriculture. So reducing its greenhouse gas emissions is a step in the right direction. Unfortunately they are not discussing a reduction of the amount of cows and beef produced (Oct. 2015)
* The SAVE FOOD Initiative – the Global Initiative on Food Loss and Waste Reduction. There is nothing wrong with reducing food waste, as long as it is no excuse for corporation to continue with their current unsustainable practices. (2011)
* Adaptation for Smallholder Agriculture Programme – International Fund for Agricultural Development (2012) ()
* The Blue Growth Initiative (launched in 2013)

We cannot wait for UN proceedings and measures from the governments. However it would be great to use the extra momentum built by the mobilizations for Paris for our own alternatives and action campaigns. To get inspiration, have a look at the Climate Games website. There, you can see a wide array of actions that have taken place in recent weeks in Paris and elsewhere. During the Climate Games awards on Sunday night in Paris, prizes were given to activists in many categories. 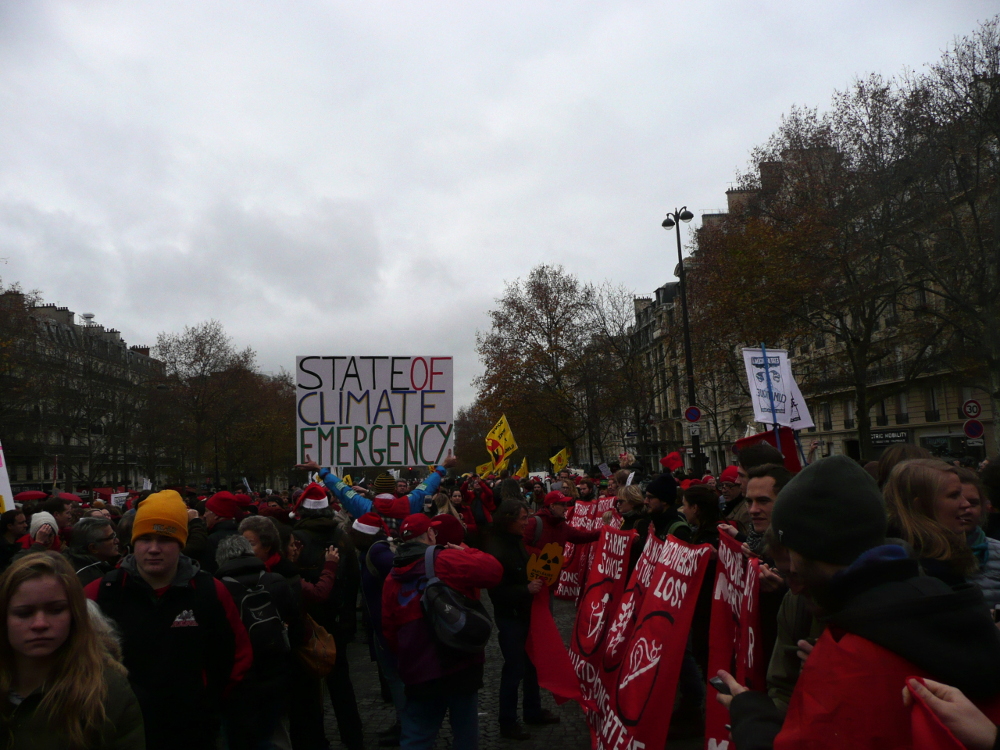 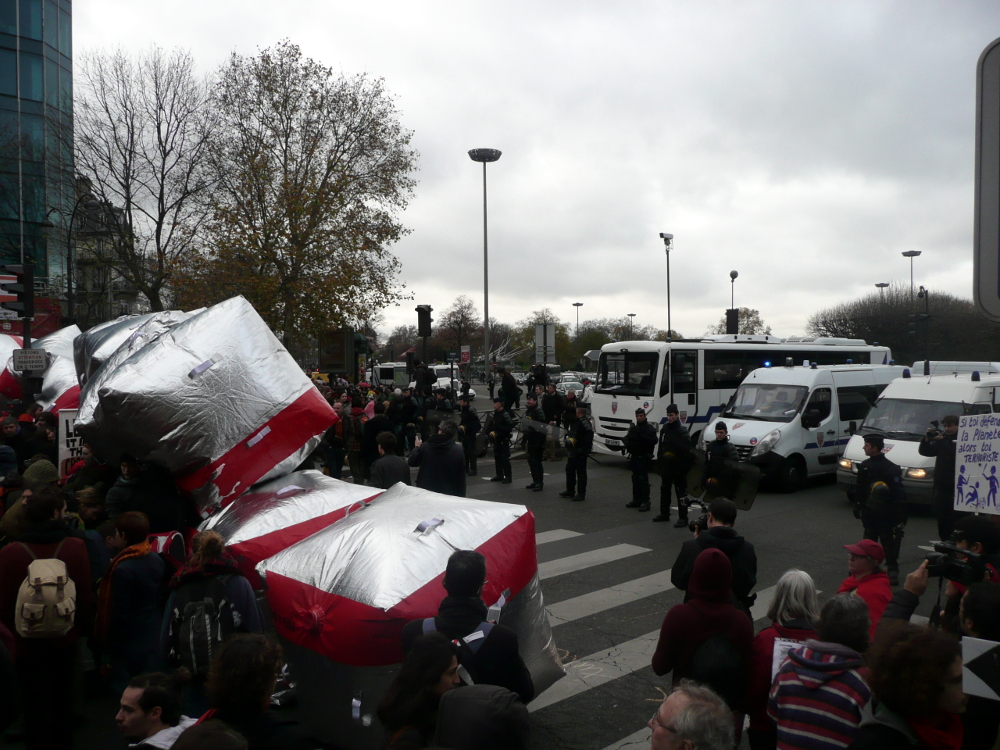 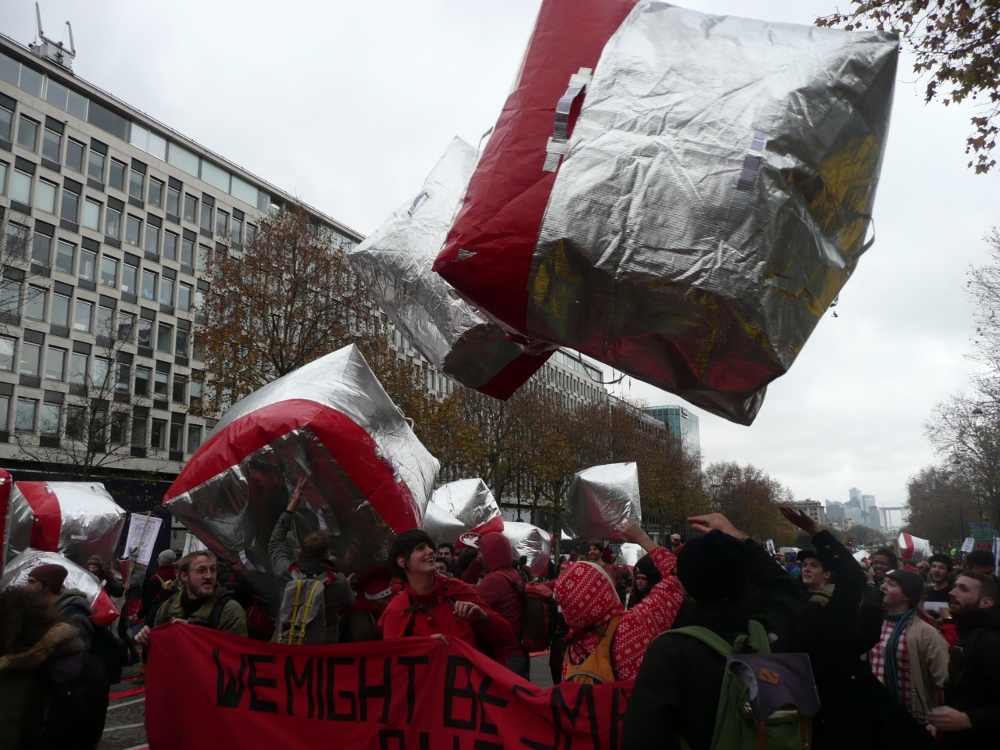 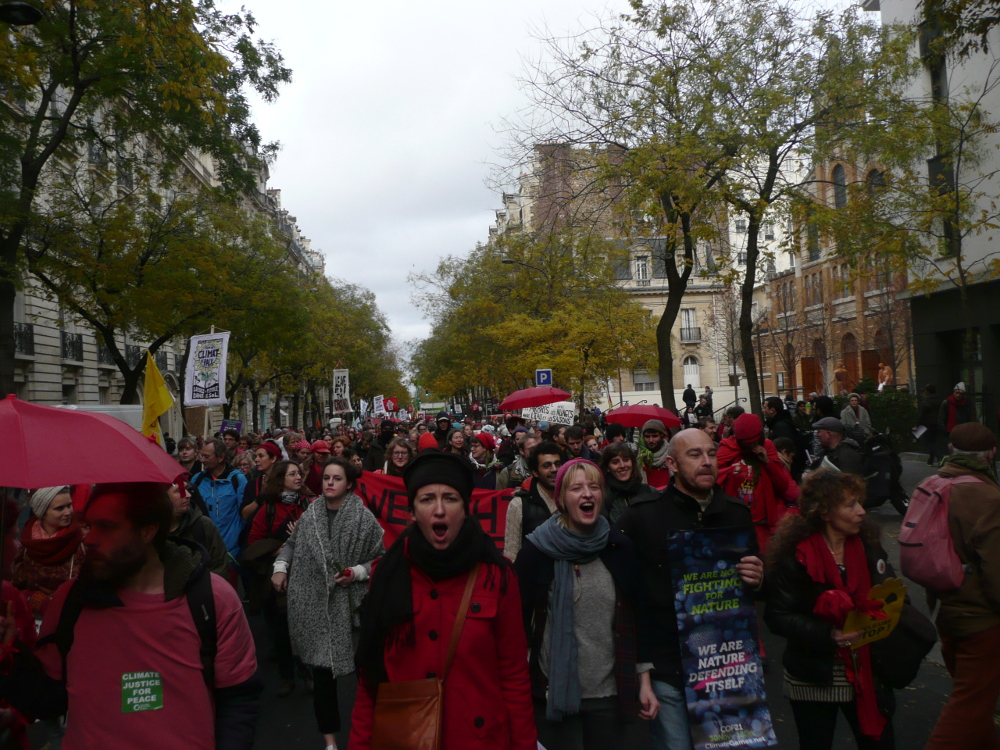