The occupyers and other activists in ZAD have sent out a call for help. It is always possible to find a place to sleep and you can stay as long as you want. It is good though to bring a warm sleeping bag, a matress, tent, clothes, a raincoat and if possible walky talkies, climbing gear and other materials which are useful during actions. 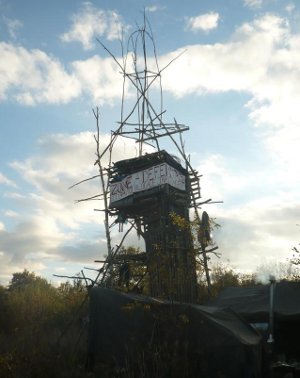 Like with all large building projects there are also in this case some big companies who hope to make a lot of money. The main one here is Vinci, an international operating French company specialised in building high ways and other large infrastructure projects. It is also involved in the building of the very controversial highway though the Khimski forest close to Moscow. Also in the Netherlands Vinci has several  subsidiaries and financial interests in construction companies and projects  One of them is the building of the Tweede Coentunnel, a fanatic way to increase car traffic in the Amsterdam region by doubling the capacity of a high way.

Read about the action and other developments in the ZAD on Indymedia and on the website of the Zone a Défendre.

And here you find a nicely written report of this movement and the evictions: ‘Rural Rebels and Useless Airports: La ZAD – Europe’s largest Postcapitalist land occupation‘