Today’s action at Starbucks in de Pijp neighborhood in Amsterdam was a success, despite the grey weather. For more than one hour, we handed out flyers to customers and passersby and stood in front of the shop with a banner stating “Starbucks, Say NO to GMO’s!”.[:] 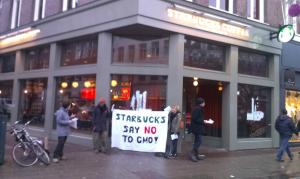 Indeed, Starbucks is member of the Grocery Manufacturers Association (GMA) who is suing small US state Vermont for wanting to let consumers know what they eat by labeling GM food. On top of not respecting people’s right to information of what’s in their food, corporations should not be using lawsuits to overturn legitimate, democratic decisions!

We received many positive reactions from the people we talked with or stopped to take a picture. Some of them did not know about this law suit and were glad to get information, others were pretty well informed and wished us good luck. We also heard comments such as “I never buy coffee there, they don’t pay tax !”, “I am American and I hate them!”. There is definitely room for more actions like this one in the future, as long as Starbucks remains part of the GMA.

Starbucks and Monsanto don’t want you to know what’s in your food – and take US State Vermont to court over it!

Starbucks – No Stars, Only Bucks!

Starbucks and Monsanto are working hand in hand in the Grocery Manufacturers Association (GMA) suing the small state of Vermont. Vermont is the first US state that has passed a law requiring labeling of food containing Genetically Modified ingredients, paving the way for other states to follow.

According to the GMA, and therefore to Starbucks who is a GMA member, such a law would be costly and useless for consumers. In its communication, the GMA deliberately ignores the fact that GM labeling is mandatory in 47 countries in the world – including all EU member states, Russia and China. But apparently US citizens still do not have the right to know what is in their food.

Monsanto might not care about what we think, but a public-facing company like Starbucks does. Let’s push Starbucks to withdraw its support for the lawsuit and quit the GMA. Whatever you think of GMOs, corporations should not be using lawsuits to overturn legitimate, democratic decisions.

LET’S BOYCOTT STARBUCKS! Just like Neil Young and a bunch of other reasonable people who enjoy good coffee from independent retailers.

Keep yourself informed on GMOs: www.aseed.net