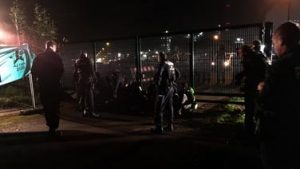 The blockade of the fertilizer company Yara that had started on Monday, continued during the night. In the evening some activists, the newly formed ‘yellow finger’, even managed to block the third entrance. This only lasted for two hours though. We did affect the activities inside the plant, but unfortunately we have not been able to shut it down completely. On the positive side; the camp and the action got a good press coverage in Germany.

The scenery was fun; a bunch of activists sleeping one on top of the other, some of them on inflatable mattresses under the improvised tents they built up during the evening. The night was warmer than expected even though it started to rain. 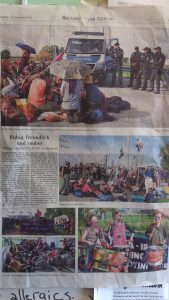 During the night a few activists managed to enter the terrain. After some running and climbing in the factory they got caught, but the footage they produced looks exciting. In the morning the yellow finger tried again to reach the western entrance. This side of the terrain was still in use to bring in workers and refreshed police troops and was for this reason heavily guarded. Although the police behaved relatively calm during the blockade, at this moment they decided it was time to get rough and to kick activists out of the way.

During a meeting it was agreed to stop the blockade at 3 o’clock in the afternoon and to walk back to the camp as a large and powerful group demonstrating on the streets, dancing and celebrating all the things achieved.

The blockades organised themselves by having regular meetings called spoke councils where one representative of every affinity group was joining in order to share information, discuss the continuation of the action and to take decisions, for example about food, tents, possible decentralised actions, and at the end the moment of leaving.

After some days in the camp we are way more informed about the effects of synthetic fertilisers, the activities of Yara and many other related topics. But how to spread this knowledge and our message about a better agriculture and society? With a good outreach team! During the action the Free the Soil media team has been very active and fast. Permanent updates have been published on the live ticker on the Free the Soil website, on facebook and on twitter. Due to good media work, many phonecalls and interviews also the mainstream media in Germany have been covering the action quite well. In general the articles about the camp and the actions were positive. And often newspapers and websites even put effort in explaining the topic. 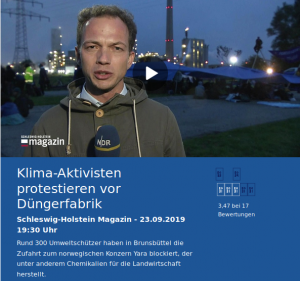 Some newspapers took over a short piece from the main German press agency DPA quoting Yara: „our environmental- and industrial solutions contribute to the improvement of air quality and to the reduction of emissions “. In earlier articles we already explained that for their main production, the ammonia and synthetic fertilisers, this is far besides the truth. 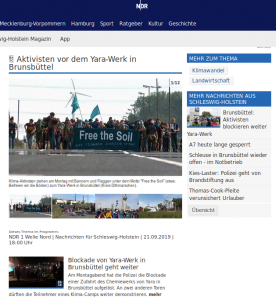 But next to our Free the Soil action, in the past days also other climate related issues get a lot of attention in the German media. Heavy and emitting SUV cars, Greta Thunbergs speech, striking scholars, melting glaciers in the Alpes and politicians desperately trying to convince the public that they are actually taking climate change seriously. 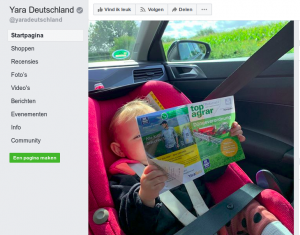 And what about Yara in the meantime? Did they respond, apart from the standard answer they gave to a few journalists? Nothing on their website, nothing on their Twitter page. And their Facebook page? .. On the day of the blockade they posted this picture.

How do we look back at the blockade, right now with all these new experiences and fresh emotions still in our heads? Some more positive than others, depending on people’s expectations and main goals. But an important conclusion is that we all learned much more about how to organise a such a camp and mass action. And during the process and the action days we also got to know much more about the Yara facility in Brunsbüttel, for the next time.