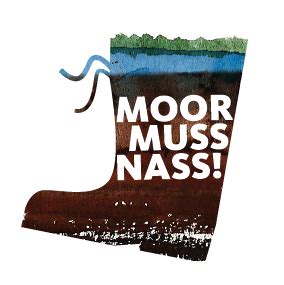 On the third day the camp is buzzing from action preparations, but in between we have been learning and exchanging about the local area and its soil. And because of similarities in soils, climate, and agricultural practices, these discussions are quite relevant for the Netherlands as well.

The workshop / walk about peat lands was the most popular activity at the camp so far, with more than 80 people willing to attend! Together with a landscape ecologist from the Succow Stiftung in Greifswald, two groups went on an excursion in the area to learn about peat lands, their history, their role in storing carbon and the huge amount of green house gases they emit at the moment due to draining the agricultural land.

Peat is a huge mass of wet organic matter that has not decomposed. Peat lands represents 3% of the land surface in the world, out of which 0.4% has been drained for human use. It is little known that peat lands store twice as much GHG than forests, which cover 30% of the world’s land! In natural circumstances the soil can contain up to 97% water, but as soon as this is drained the organic matter oxidates and GHG stored until then are released. In Germany, drained peat lands (just 7% of the total agricultural land) emit more GHG than the aviation sector. Who would guess that a beautiful, flat green pasture is so harmful to the climate? In Germany and Europe, more than 90% of them have been drained and destroyed.

The take-home message was that this process could be slowed down and on the long run stopped, or even reversed, by raising the ground water level again. This would also save the peat lands’ specific biodiversity. An alternative type of production could be possible. Paludiculture is a compromise between nature and production: we can grow various plants there, such as cattails (reeds) which can be used as insulation and construction material. Though the European Agriculture Policy (CAP) remains a big obstacle at the moment and makes it even hard to experiment; drained peat lands receive subsidies while the wet alternatives are not considered to be agriculture and for this reason will not receive any support.

For a group from the Netherlands, it really makes sense to bring home this story. In the Western half of the country the peat has been drained and used as fuel for many centuries. Layers of up to 10 metres of peat went into the air, creating a huge historical climate debt. And to keep the feet of their cows dry and to be able to use heavy machinery, farmers are still lobbying for lower ground water levels.
On the website Moorwissen you can find more info (as well in English) about this as interesting as alarming topic. The organisation also made a nice and short animation video on the topic.

So far the camp seems to have a good relation with the people from the neighbours. Yesterday a group of about 40 people from the village got a tour over the camp. They look interested at the mobile kitchen and listened to the story about solar panels. Many talks took place between the locals and the people from the camp. And even here the link with the peat topic was raised. A farmer mentioned that soil subsidence is a theme as well here, just behind the dike and close to the rising sea. And although to a lesser extent, the clay grounds near the sea and the Elbe River are also declining.
Obviously we also talked with the local farmers about fertilisers and Yara. We both agreed on the fact that the scale enlargement in agriculture and the powerful position of the large corporation are a problem. But ‘of course’ he was using synthetic fertilisers to have a higher production. Some work to do.

And what about the camp life? During the night more buses and people arrived, including one with friends from Brussels. From 200 people of the first day, the camp has grown and counts now more than 500 people. The on-site bakery, pizzeria and crêperie are running almost non-stop to feed all these hungry activists!

It has become a very lively place and people are increasingly involved in all kinds of preparations for the action day. Besides attending to a wide array of workshops and talks, people are making action materials such as colorful accessories and banners, members from various Rhythms of Resistance collectives across Europe rehearse together, and lots of people started discussing about affinity groups this afternoon, enjoying the sunny weather on the grass. The big day is getting closer and we can clearly feel this in the camp.