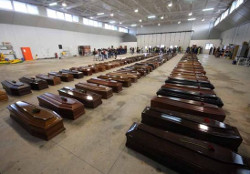 A statement from the World Rural Forum about the 340 people who died at the coast of Lampedusa while they where trying to enter Europe:[:]

As the World Rural Forum Co-ordinating Team for the preparation of the International Year of Family Farming-2014 we share the grief of the international community at the death at sea  – so close to the coast of the Mediterrranean island of Lampedusa  – of over 350 men, women, boys and girls. May they rest in peace.  We also grieve at the tragic situation inflicted upon their families towards which we express our heartfelt solidarity.

There are doubtless several causes for this tragedy. However, we must to stand up against the dominant socio-economic development and governance models, whose convergent injustices and huge continental inequalities impel Africans and peoples of other continents to desperately seek their survival away from their home countries, all to often at the cost of their lives.

Africa is not a ‘poor’ continent, it is  exploited, both from inside and outside, by a combination of political and economic interests which appropriate and undersell  its innumerable natural resources and thus its local agriculture.

Africa’s food production, mainly generated by virtually unprotected family farming and now converted into a prey by major investors seeking juicy profits, remains, if  really supported,  the most sustainable source of food security and job creation enabling a dignified life for millions of rural families and of the continent’s inhabitants in general.

It is time for African governments and the UN system to decide to give decisive support to  womens’ and mens’ farmers organisations at national, regional and Pan-african level as they continuously cry out for the strengthening of family farming based on small scale food producers, traditional fishers and pastoralists.

It is also time for leading local and multinational financiers to cease grabbing Africa’s land and water resources, condemning hundreds of millions of women and men to abandon their crops, fishing and livestock raising to become either poverty-stricken city dwellers or desperate refugees, doomed to more and even graver Lampedusas.

In the context of the forthcoming International Year of Family Farming (IYFF) 2014, many hundreds of peasant, rural, development and other organisations jointly defend the right of peoples to produce a substantial share of their food, on the way to achieving food sovereignty.