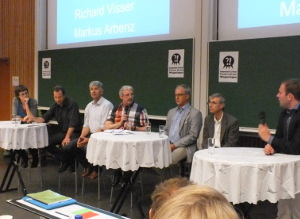 On the 7th and 8th of June the GMO free days were organised. On June 7, in the evening, there was the debate with the title ‘Do we really need GMOs?’. At the debate proponents of industrial agriculture who say we need GMOs to feed the world and critics who say we should invest in small-scale agro-ecological agrilculture crossed swords. On June 8 it was the GMO free day to show that sustainable agriculture and food production without genetic engineering is possible and growing.[:]

At the debate there were the following interesting speakers: Markus Arbenz (director IFOAM), Michael Kester (director Syngenta Netherlands), Michael Antoniou (moleculair genetist, King’s College, London), Barbara van Dyck (doctor in applied economic science) and Pim Lindhout (director of Solynta, a potato breeding company). The venue, at the Forum on the campus of the WUR, was overfull. The public consisted mainly of students, and there were also some scientists, farmers and people involved professionally in biotechnology. During the debate different speakers were combined at different times and at times the pulse of the audience was checked. For example with the question “Do we really need GMOs?”, a slight majority said no.

During the debate people had certain stances and were not brought a lot closer together… Kester said he thinks that using GMOs alongside conventional breeding methods is a valuable technique that should be used. He says that the knowledge about the technique has developed far enough so that they can be used safely. Visser and Lindhout both had a point that the technique should be used, when safe, to help to increase yields to make sure sufficient food is produced. Antoniou stated the use of the technique has brought more knowledge and the technique can be safely used in greenhouses and industrial processes. The technique is still very unpredictable and crude and therefore he thinks that the release in the environment should not be done at this moment. Because there might be risks to health and the release can be irretrievable. Van Dijck wanted to look a step higher, to see how the question of solving hunger can be solved: look at the available alternatives and choose one that has the most benefits for nature, farmers and consumers. Instead of solving the problems of GMOs, we should think about the question if this is the solution to world hunger at all. Arbenz also said that hunger has two aspects, production and accessibility. Now the focus is on production, but the production is high enough at the moment. So instead accessibility should be the focus.
At the end of the debate there was pie for the panel, and drinks and people were discussing further amongst themselves enthusiastically.

On Saturday June 8 it was the actual GMO free day, to show alternatives with a (modest) market and workshops and debate. And show we do not agree with GMOs with a March to the GM potato field and a discussion with the DuRPh scientists. The day was on the same spot as the successful March Against Monsanto had started two weeks before. The weather was great, perhaps somewhat to great. In the morning people were building the kitchen and the market and then they were ready for the crowd… The crowd was not as big as we had hoped but there were enough people to call the day a success. There were workshops about agro-ecology and compost toilets and closing of nutrient cycles. 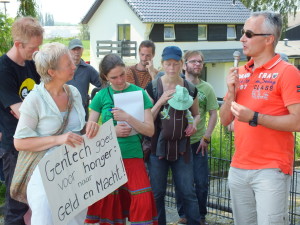 After the March to the field there was an interesting discussion with Anton Haverkort (project leader) and two other scientists. [1] There were questions about the technology and also about how to prevent a ‘super’-blight. The answer was that monitoring should be done to make sure that the R-gene resistance is not broken. It is unclear how this will happen, but the farmer will not be forced to plant a certain variety. Another interesting question was about the lobby done by some scientists, linked to the DuRPh and/or WUR, to take cisgenic modification out of the EU GM Regulation and thus free from the specific safety testing and labeling requirements. It was said that yes cisgenesis is still genetic modification and that the lobby was done by the scientists on a personal title and not as DuRPh. The question remains if this is also clear for the people who spoke to the scientists.

The day was rounded of by a tasty dinner and a local debate called ‘You, Your Town and Global Agriculture’. The focus of the debate was how to find a balance between big companies and industrial agriculture with GMOs and local agro-ecological and organic initiatives, within Wageningen. To protect the local initiatives one could make GMO free zones in the allocation plans (like in Nijmegen). [2] All in all the days contributed to getting people informed about GMOs and the alternatives. 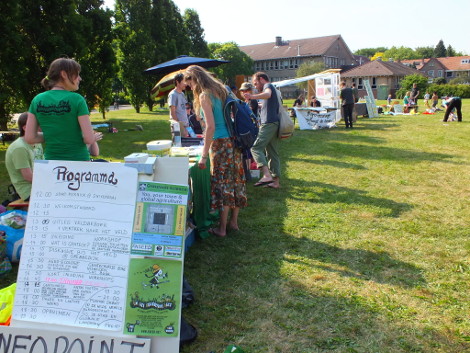