Several hundred people gathered to protest outside the European Parliament in Brussels on the 19th of September in what was the culmination of the march. The demonstrators presented their demands and a photo album with one thousand messages to the representatives of the EU institutions. A protest brunch and a conference were also held outside the European Parliament. 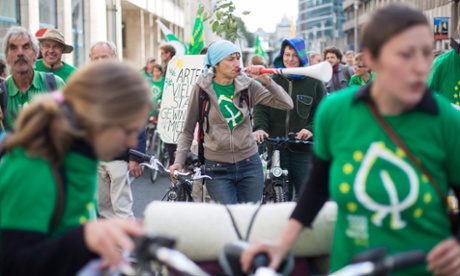 • Secure, stable, cost-covering prices for farmers and fair prices for consumers
• Support for true family businesses
• A greener and more sustainable agriculture,
• The cultivation of protein crops in Europe instead of the import of soybean
• Protection of breeders’ rights and against patents on seeds and food
• No food speculation and dumping of surpluses in developing countries.

ASEED and other organisations in Europe like the Polish ICPPC [link: http://www.icppc.pl/eng/index.php] added to these demands a strong call for a complete ban on GMOs. ASEED supports the aims and intentions of The Good Food March but we insist that no positive green reforms of the European Common Agriculture Policy can move ahead unless a complete ban of genetically modified plants and seeds is fully integrated into this process. A lot of the organisations involved in the initiative, like Friends of the Earth Europe, The European Coordination Via Campesina (ECVC) and IFOAM to name a few, take a strong anti-GMO stand.

We therefore call upon everybody to fully support this demand and to recognise the vital importance of instigating a GMO ban while at the same time, ensuring the widespread availability non GM native seeds, as part of any serious CAP reform procedures.

Such a call already has the support of the majority of EU citizens. Citizens who now recognise such an action to be an essential component in protecting both public health and the wider environment from a process of potentially irreversible contamination and the accompanying loss of irreplaceable genetic bio-diversity.

In the same line of thought the patenting of seeds and genes as is the case with GMOs, as well as the patenting of livestock has to be abolished. Patents on life increase the corporate control over our biodiversity and food supply at the expense of farmers and a healthy diet. Therefore we demand a European agriculture policy AND practice that enhances food and seed sovereignty. Good food and fair agriculture are GM free and patent-free.

In Germany, participants in the march complemented their call for a sustainable and GMO-free agriculture with a direct action. The German group blocked the gates of the headquarters of German biotech giant BASF and demanded that the authorisation of the company’s GM-potato Fortuna in the EU is stopped. BASF is currently running field trials with Fortuna potatoes also in the Netherlands.