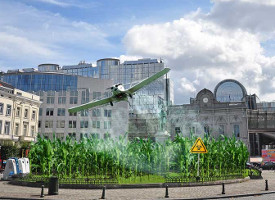 We need your help, urgently, to stop a new GMO being grown on the fields. Possibly as soon as coming Friday 17 January, the EU member states will decide whether Pioneer’s GM maize (technical name 1507) will be allowed to be grown in Europe.[:]

Can you help to push this letter writing action to stop Pioneer’s GM maize in the Netherlands? On the action page you will find a list of key countries – including the Netherlands – people can write to. These are countries whose opinion matters most in the outcome. You can also write to multiple countries.

This would be the first GM maize to be allowed for growing on the field in Europe since 1998. Back then, it was Monsanto’s infamous Bt-maize (MON810), producing its own insecticides. This time it is also a Bt-maize, made by Pioneer, but one that has in addition been made tolerant to a powerful weedkiller (glufosinate-based, like Liberty). This weedkiller is classified as highly toxic by the EU.

There are many problems with this GM maize. Since it produces its own insecticides, it could pose risks to butterflies and moths and there has been no research on its impacts to other beneficial insects such as bees and other pollinators. Contrary to EU rules, the required safety assessment linked to the use of the weedkiller has not been done. For more information about Pioneer’s maize 1507 read Friends of the Earth Europe’s backgrounder here.

It would be _great_ if you could share this action in your networks, with your friends by email, to mailing lists, on your website, or via social media.