The European Patent Office had a meeting on June 29 2017 about patenting plants and animals. This is part of the process that is already going on for almost a year and ASEED has often written about this process and the need to stop patenting plants, plant material and animals in the EU. And the result of the meeting depends on who you ask. The headers of the press release from the network No Patents on Seeds are very critical: “Still no solution regarding patents on plants and animals – Despite strengthening of prohibitions: Patents on conventional breeding still not ended in Europe”. But the Dutch organisation of plant breeders Plantum (who is also against patents) is much more positive “Geen octrooi meer op klassiek veredelde planten – Het Europees Octrooibureau verleent met ingang van 1 juli 2017 geen octrooien meer op planten, die het ‘product zijn van wezenlijk biologische processen’.” (No patents anymore on conventional breeded plants – From July 1st 2017 on the European Patent Office will not grant patents any more on plants that are the result of essential natural processes.) 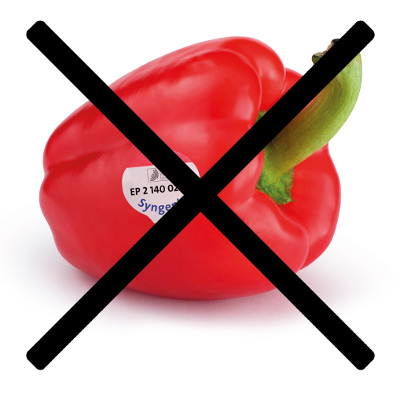 The conclusion of Bionext, the Dutch organisation we often work together with and which is both part No Patants on Seed and in good contact with Plantum, is a bit in between: “Bionext sees the proposal as a step in the right direction, but we are afraid that after implementation the new rules will still make it possible get patents on food crops.” Bionext expects that some patents that have been granted will be withdrawn, like the one from Syngenta on white fly resistant peppers.

A shared conclusion is that the protests against patents on plants and animals should continue. It could become a strategy to support patent free products and companies. For consumers it should become visible if food in a shop is patent free. And it would be good if the organic label will as well guarantee that a product and it’s ingredients are without a patent.

For more details about the possible loopholes you can read in the press release from No Patents on Seeds:

The 38 Contracting States of the European Patent Office (EPO) at their meeting in The Hague decided to strengthen prohibitions in European patent law in regard to the breeding of plants and animals. However, at the same time, new loopholes have been created that will allow the relevant prohibitions to be eroded. As a result, the EPO will shortly resume granting patents on conventionally bred plants and animals. Already in May 2017, companies were informed that several patents on plants derived from random mutations are ready to be granted. The legal and political controversy will continue.

“Pressure from civil society succeeded in strengthening current prohibitions in European patent law. But this is not yet a long term solution,” says Christoph Then, spokesperson for “No Patents on Seeds!” The EPO and big business will continue to abuse patent law to privatise the resources of daily food production. In reaction, we will maintain our pressure on political decision-makers.”

European patent law already prohibits patents on “essentially biological processes” i.e. breeding processes that do not use genetic engineering for the breeding of plants and animals. Nevertheless, the EPO has in the past granted nearly 200 of patents on plants bred through crossing and selection or other random processes, such as mutations. According to the new rules, patent applications will be refused only if they are related to a plant or animal arising directly from crossing and selection. In most other cases plants and animals will remain patentable. Especially plants and animals which are identified to inherit random mutations that are relevant for the breeding characteristics are defined as being patentable.

In the document adopted, there is also no clear distinction between conventional methods of breeding and genetic engineering: If plants with specific genetic characteristics are patented, then all plants with such traits will be covered by the patent, regardless of whether they are derived from methods of genetic engineering, from conventional breeding or whether they naturally show those traits. In effect, the EPO is fulfilling demands from industry by declaring that plants and animals are patentable if genetic characteristics are described in detail in the patents, no matter how these were achieved.

The patents on barley and beer granted to Carlsberg and Heineken are just one example. In 2016, the companies were granted two patents on barley plants that produce kernels with random mutations. A third patent claims plants resulting from the crossing of the two barley varieties claimed in the other two patents. The patent covers the barley, the brewing process and the beer brewed with the barley. Many civil society organisations have filed oppositions against these patents. The EPO has itself confirmed that, based on the new rules, it is unlikely that these patents will be revoked.

“If plants or animals are patented, other breeders can no longer use those plants or animals or, if they do want to use them, they need to apply for a licence from the patent holder. Under the traditional variety protection system, all conventionally bred varieties on the market can be freely accessed for further breeding. This free access is critical to innovation in breeding and the preservation of biological diversity”, Katherine Dolan says from Arche Noah, Austria.

The “monopoly patents” are primarily in the interests of the largest companies. On the other hand, small- and medium-sized breeders are coming under increased pressure, and fear being squeezed out of the market or taken over by the seed giants. Farmers and consumers alike will become more and more dependent on corporations such as Monsanto and Bayer, which together already control more than 25 percent of the global seed market.