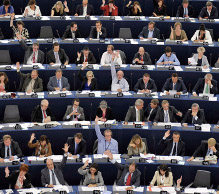 The proposal for a new European Seed law has just been rejected by the European Parliament. This is a victory for all the organisations and individuals that have protested and organised against the proposal.

The Voting
The European Parliament adopted with 511 to 130 votes a legislative resolution, which rejects the proposal of May 6 2013 very clear and calls the Commission to submit a new one.[:]
Until the last moment it was unclear: would the Parliament adopt such a legally binding resolution or would it restrict itself to a simple appeal to the Commission to withdraw the proposal? This appeal in the so called rejection report got 650 to 15 votes. But the Parliament insisted in a voting on the legislative resolution with the above mentioned result. If you are interested in the question who voted how, you find the results of roll-call votes here: http://tinyurl.com/EP-voting-140311 on pages 16 to 21.
(http://www.seed-sovereignty.org/EN/)

What’s next?
A press release from the European Parliament says the following about the next steps: “Since the Commission refused to withdraw its proposal after Parliament rejected it, MEPs finalised the first reading and sent their position to the Council.
If the Council supports Parliament’s rejection, then the legislation process will end. Alternatively, the Council could amend the original Commission’s proposal. If it does so, then Parliament could either reject the Council’s amendments at the second reading – and thus kill the legislative proposal for good – or it could start negotiations with the Council on the final wording of the new seed legislation.”