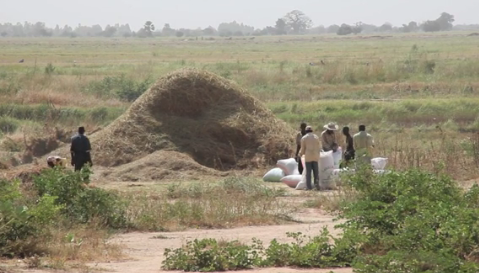 Bakary Mamatou Traoré, a former teacher, a farmer and activist against landgrabbing will come to Amsterdam to explain about the problems and struggle in the agricultural area Office du Niger in Mali. In that African Country south from the Sahara farmers are massively forced from their land or under bad conditions expropriated. Large landowners use the land afterwards for the production of biofuels and other export crops.

Below you can find a general text about the infotour of Bakary in Germany and the Netherlands.

In the venue there will be an exposition about the struggle from the peasant community in Falea in the South-West of Mali against a planned Uranium Mine.

All around the world small peasant farming has been under pressure for a long time. In the countries of the Global South it has been especially the structural adjustment programmes of the IMF, the World Bank and others, who have since the beginning of the 1980s by forced opening up of markets, privatisation of state trading enterprises, cancellations of subventions etc., led to a massive worsening of the anyway very much precarious living conditions in the countryside. In addition there are new, not less dramatic developments, especially the already now perceptible effects of the climate change as well as landgrabbing. Against this background it is no surprise that world-wide a bigger part of those suffering from hunger are small peasants respective farmworkers; in addition there are flight from the land and migration. And still: As dramatic as the situation is, there is also resistance from below. The most well-known is the small farmer’s network Via Campesina, which with its demand for food sovereignty unmistakably demands the right for global self-determination in the production of and the trade with food. With the slogan “Small Farmers Cool the Planet” Via Campesina also points to the disastrous consequences of industrial agriculture. In addition there are countless local networks of resistance, for example in the Office du Niger, a fertile inner delta in the West-African Sahel country Mali. This is where in the past three years the transnational network Afrique-Europe-Interact has together with local peasant organizations build up the grass roots union COPON (Coordination paysans au Office du Niger). In addition Afrique-Europe-Interact and COPON support the struggle of the two villages Sanamadougou and Sahou, who have since 2010 gradually lost their fields through landgrabbing. In the event Bakary Traoré will talk about the peasant struggles in the Office du Niger. Here also the question will be addressed how these struggles can be politically and logistically supported from Europe.

Bakary Traoré (53) comes from a small farmer’s family. He trained to be a teacher, but returned after a short while to farming, because his salary was not enough for the survival of his family. Later he was kicked out of the union because he participated in independent protest of farmers. In 2012 he joined Afrique-Europe-Interact and is active in the self- organisation of peasants in the office du Niger.