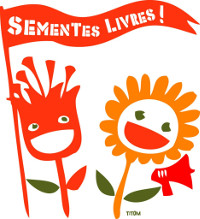 [call for action from Via Campesina]

For the rights of farmers to use and freely exchange their seeds and breeding animals, and to have unrestricted access to all available crop diversity
Against patents on living organisms, and control of the seed market by
multinationals

The European Parliament will be voting on legislation on the marketing of seeds, animal and plant health and official controls on food production.

The European Coordination Via Campesina is calling to organize action in
Brussels or in your own country before the vote on this regulation.

Industry is bringing huge pressure to bear on the Parliament to cancel some
of the openings proposed by the Commission:

– recognition of farmers’ rights to exchange their seeds;
– marketing of unregistered or heterogeneous seeds in a framework that is already too limited;

The other most contentious issues are:
– widespread marketing of patented plants and varieties, the risk of a total ban of farm-saved seeds and resulting potential contamination of all farm-saved seeds;

– privatisation of public control of the market, replaced by large private entities controlled by industry, or, in the case of large companies by their own internal controls;

– setting production and marketing standard that are inaccessible to small operators and organic seeds;

– and finally the increased difficulty for certain associations involved in biodiversity conservation to continue disseminating their seeds.

This is why the European Coordination Via Campesina is launching this call to all farmers, people who defend farmers and farm-saved seeds, organic farming organisations, to all associations who work in and support the conservation and dissemintation of agricultural biodiversity and finally to all those who feel concerned, to support this peasant struggle by mobilizing on january 20th, as well as by organising activities (public seed exchange, symbolic actions, lobbying politicians, etc.)in your own country before the vote on this regulations.

How to participate to the mobilisation?
Bring your SEEDS to exchange and plenty to make noise and music !!

More information on the website of Via Campesina Europe. On that website you can also find a programme of the day.