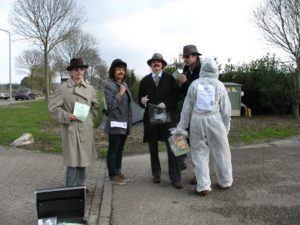 Patent inspection at ‘Come into the Greenhouse’ event

Flevoland, March 27, 2010 – Today a CSI Crime Seed Investigation unit visited several greenhouses at the national event Come into the Greenhouse visualising what the future may look like: worlds largest seed company Monsanto will check growers for the presence of suspicious crops, prevent them from using patented seeds or accuse them of patent breach. With this action ASEED wants to draw attention to the international campaign ‘No Patents On Seeds’ against applying patent law on seeds and animals.

Members of ASEED dressed up as investigators and detectives put up a little show for the public visiting the greenhouses and the growers themselves. They also spread an information flyer explaining the background of No Patents on Seeds, the dangers of power concentration in seed giants like Monsanto, and current developments in patenting and breeder rights. 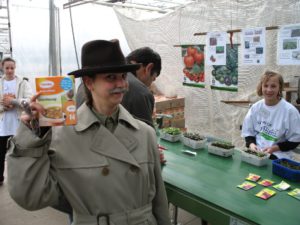 Momentarily farmers, growers, and seed breeders still have the right to produce their own seeds protected under the breeders’ law.  But if it is up to Monsanto, this will come to an end soon. Through several take-overs in the Dutch seed sector the biggest agro-multinationals are rapidly working towards domination of the European seed market. Pending changes in the European patenting applications and seed regulations would make it possible to patent more and more crops. This would overrule the current breeders’ rights laws that keep it possible for breeders to use each other’s varieties to develop new ones and farmers to save their own seeds for the next season. Currently not only patent application for genetically modified food crops are pending, also conventional crops are in the process of being patented. Monsanto and other large seed companies are lobbying the Dutch government to put patents above breeders’ rights.

This action should make clear that also Dutch growers and smaller seed companies do not benefit from the Monsantosizing of agriculture. It is obviously an act of solidarity towards the visited greenhouses and growers. An independent sustainable food production is too important to leave over to mega-companies who are only in it for the profit. 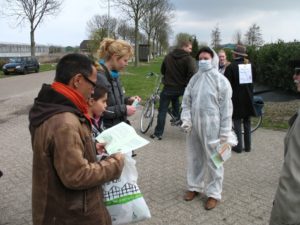 All over the world there is concern over the growing power of corporations and new developments in patent applications and seed regulations. On Friday march 26 the broad coalition ‘No Patents on Seeds’, with over  200 member organisations, officially send an alert to governments and patent agencies all over the world warning against the Monsantosizing of seeds, plants, and animals. So far 8500 people signed the petition that will be online until July 11, 2010, when the Global Action Days of No Patents on Seeds will end with a manifestation at the European Patent Office in München, Germany. Until then everybody can still sign on via www.no-patents-on-seeds.org.

But there is more going on in the European countryside. A Europe-wide coalition including Via Campesina has launched a European Food Declaration for food sovereignty. A healthy farmers’ community and local food production, independent of massive animal feed imports, that is what we need to be ready for a future with serious oil shortage and climate change. In the Netherlands the platform Aarde Boer Consument (Earth Farmer Consumer) is initiator of this action to influence upcoming European 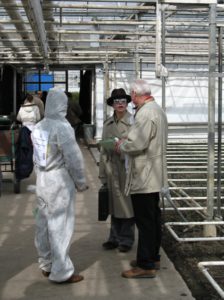 Agriculture Policy changes. At the same time local food initiatives are developed in which consumers and producers work together to produce local, socially sustainable food without any corporate involvement. In 2010 ASEED will start a project to stimulate and support the creation of such food co-operatives.

Download A SEED’s new brochure on developments in the Dutch seed industry: ‘You reap what you sow’ or in dutch: ‘Wie wind zaait zal storm oogsten’.