After several months of work following the hearings of witnesses and experts (The Hague, Oct. 2016), the five judges of the Monsanto Tribunal have delivered their conclusions in a 60-pages legal advisory opinion. What did they conclude?

In a nutshell, they stated that Monsanto’s activities have a negative impact on basic human rights. Besides, better regulations are needed to protect the victims of multinational corporations. Eventually, international law should be improved for better protection of the environment and include the crime of ecocide (the links to advisory opinion in several languages are at the end of this article). 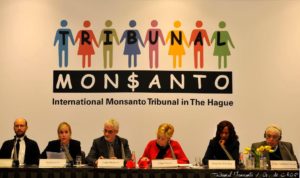 This is not a big surprise for anyone who knows a bit about the American giant agrochemical corporation and the current state of the world. However, the Monsanto Tribunal did not aim at stating the obvious in terms of moral or ethics. It was convened by civil society to “clarify the legal obligations and consequences of some of the activities of the Monsanto Company”. Unlike other civil society initiatives, the results of the Monsanto Tribunal are based on legal consideration and grounded in international human rights law and international humanitarian law.

The judges of the Monsanto Tribunal – all of them professional magistrates -, publicly presented their work on April 18th 2017 in The Hague. Their advisory opinion consists in three sections:

I. The introductory section details the conditions within which the Tribunal was initiated.

“Opinion tribunals are tasked with examining, using a judicial method, the rules of law applicable to highly problematic events or situations which directly affect and are of serious concern to people or groups of people as well to society as a whole. Their objective is twofold: alerting public opinion, stakeholders and policy-makers to acts considered as unacceptable and unjustifiable under legal standards; contributing to the advancement of national and international law.”

II. The middle section examines the six questions posed to the Tribunal (Terms of reference).

For each question, the judges explained the existing legal framework and referred to the testimonies given before the court, to previous or current court cases, to scientific studies and to reports. To get more context, watch or re-watch some of the testimonies or pleas below. Many of them have been used to examine more than one question. 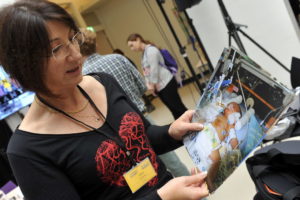 1. Right to a healthy environment: “Monsanto has engaged in practises that have serious and negative environmental impact. These impacts have affected countless individuals and communities in many countries, as well as the health of the environment itself, with its consequent impacts on plants, animals and biodiversity.” 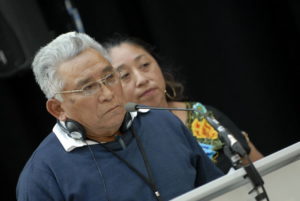 2. Right to Food: “The use of GMOs all around the world is undermining the ability of farmers to access seeds and damaging agricultural production by communities. This situation is also affecting food sovereignty, which implies priority of peoples’ right to food and food production, rather than corporate interests.”

3. Right to health: “As a manufacturer and marketer of GMO seeds that increase the use of glyphosate, Monsanto has engaged in practices that have had negative impacts on human health.”

4. Freedom indispensable for scientific research: “The abuse of the freedom indispensable to scientific research is aggravated by the health and environmental risks posed by Monsanto’s conduct. Where scientists do not enjoy the freedom necessary to carry out their work, society lacks the tools to take measures that are necessary to safeguard fundamental rights […] There is in this regard a clear difference between taking policy positions where legitimate uncertainties are addressed in a scientific debate, on the one hand, and taking direct measures to silence or discredit scientists where their findings are not convenient to a particular business model, on the other. The latter situation crosses the boundary of what can be considered to be a legitimate public debate; it involves conduct that frustrates the scientific project and that is intended to undermine and silence scientists. That conduct is abusive of the right to freedom indispensable for scientific research and the right to freedom of expression including access to information.” 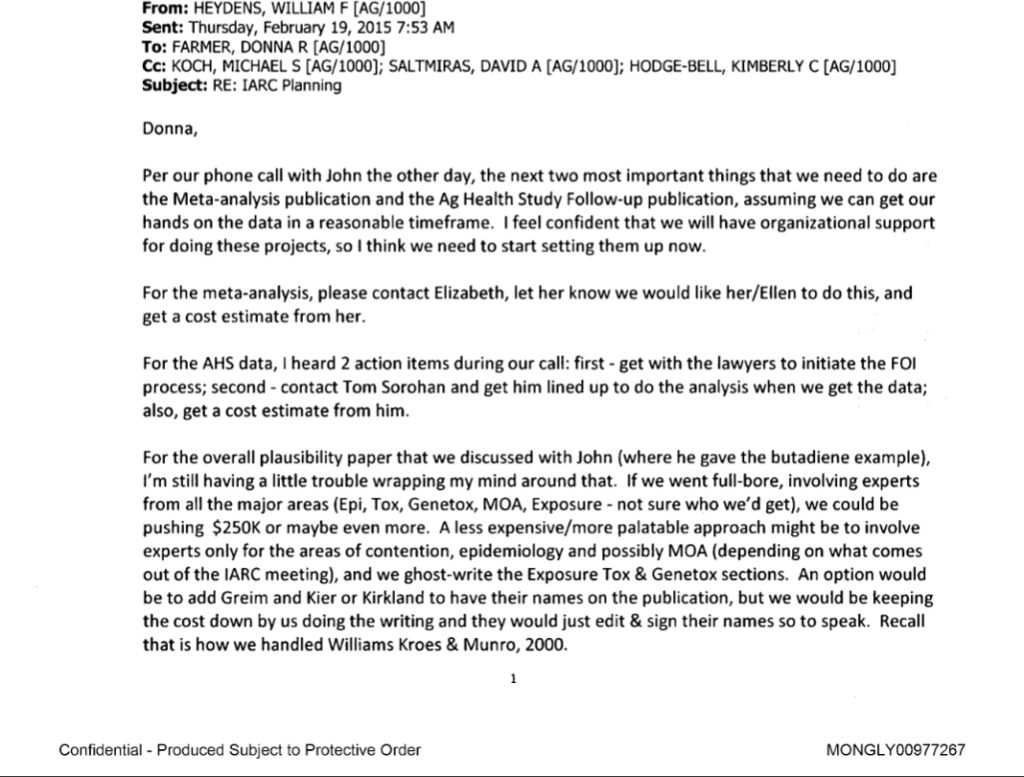 [Above, an internal Monsanto email made public at the request of a U.S. District Judge, Vince Chhabria, — despite Monsanto’s objections —. It exposes Monsanto’s conduct towards science when results are inconvenient to its business. Find all the documents related to this court case and the Monsanto Papers here.] 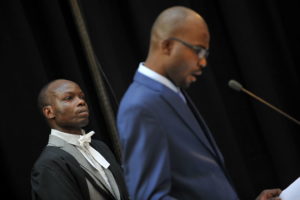 5. Complicity in war crimes: “The Tribunal cannot make any definitive finding regarding war crimes complicity. Nevertheless, taking into consideration the historic fact of damage to the population of Vietnam, and even to US veterans and their allies, and of destruction of the environment, the Tribunal deems that some force should be given to the hypothesis that relevant evidence was available regarding the fact that Monsanto: provided the means for the US campaign in Vietnam; knew how its products would be used; had information on the damaging effects to health and the environment. The civil avenue should also have been envisaged. Finally, the Tribunal is of the view that, would the crime of Ecocide be included in the Rome Statute and encompass environmental crimes as a fifth international crime, it could address those acts of destruction of the environment committed in Vietnam.”

6. Crime of ecocide : “The Tribunal is of the view that the time is ripe for proposing to set up the new legal concept of Ecocide and to integrate it in a future amended version of the Rome Statute establishing the International Criminal Court […] If the crime of Ecocide were recognized in international criminal law – quod non for the time being –, the activities of Monsanto could possibly constitute a crime of ecocide as causing substantive and lasting damages to biodiversity and ecosystems, affecting the life and the health of human populations.”

III. The final section tackles the growing asymmetry between the rights conceded to corporations and the constraints imposed upon them to protect local communities and/or future generations, wherever corporations operate.

“Any consideration of Monsanto’s obligations under international human rights and environmental law has to acknowledge the severe disparity that now exists between those obligations, on the one hand, and the rights and entitlements Monsanto now enjoys under international trade and investment law, on the other hand. Those rights are a consequence of the substantial advance of corporate rights and entitlements under the World Trade Organization and a myriad of international investment treaties […] Under these trade and investment regimes, products such as those developed and marketed by Monsanto are considered goods, engender investments, and often involve the delivery of services. As such they are subject to binding trade and investment disciplines that severely constrain the capacity of States at all levels of government to establish or maintain policies, laws and practices needed to protect human rights or the environment.”

Click on the image below to watch the summary video of the presentation of the legal advisory opinion by the Monsanto Tribunal judges: 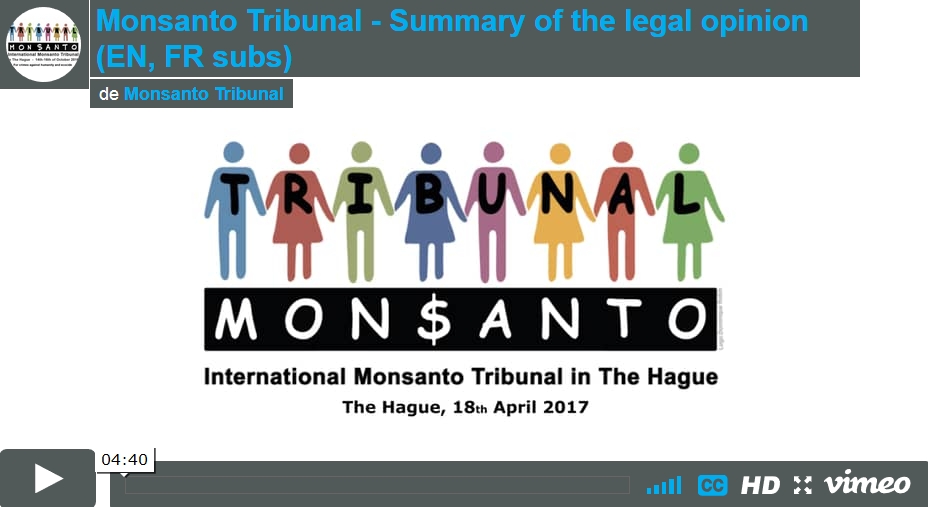 The legal advisory opinion is being disseminated among national various institutions, legal bodies and associations, universities but also NGO’s, advocacy groups… Law-making is a dynamic process where civil society plays a crucial role, like Dior Fall Sow, one of the Monsanto Tribunal judges stated it. The Monsanto Tribunal team is therefore busy with this task. You can help them by spreading the judges’ conclusions in your networks, or even by recommending them some contacts – jurisinfo (at) monsanto-tribunal (dot) com.

Besides that, Bayer has officially filed an application for the merger with Monsanto in the EU. Werner Baumann, Bayer’s CEO must face this question: in addition to the high acquisition price, will the shareholders accept to prepare provisions to face possible compensations, which could add up to several dozens, or even hundreds of billions? To calculate the amount of possible compensations, the full documentation from the Monsanto Tribunal hearings will be integrated into a global study that will assess the damages caused to the environment by Monsanto in the last 60 years. Long-term damages on nature and health will be especially taken into account. This research will be done under the auspices of renowned economists. Some experts who have already been consulted estimate now that the amount of damages could exceed by far the price of the merger. Such a research would create the basis to set class actions against Monsanto.

Finally, several witnesses who testified in The Hague have asked the Monsanto Tribunal foundation for support in their current of future court case against Monsanto. As foreseen, there is a high chance that the work done by the Judges will be used as a legal instrument by victims.

Read and share the Monsanto Tribunal legal advisory opinion and its summary in:

To help the Monsanto Tribunal to spread the legal opinion, to provide assistance to the victims and to start the study of the true costs of Monsanto, you can make a donation on their website. Click here.