On Sunday 30th November 2015, 7000 people gathered on Museumplein in Amsterdam for the Dutch Climate March, the Klimaatparade. While the Paris march has been forbidden, many demonstrations were organised in big cities all around the world.

Despite the harsh wind and a few occasional showers, the group walked for 2 hours, chanting slogans and holding many banners with strong statements. ASEED was part of the Climate Justice bloc together with other movements and organisations, including GroenFront! Check out some nice pictures on the fb event page. We are proud to say that this bloc was probably one of the biggest of the entire protest! This clearly shows that a growing number of people are concerned with climate change, and not only a handful of environment activists and scientists like it used to be perceived. Climate change has to be tackled for what it is: a symptom of a deeply unfair and destructive system that puts profits before people and the planet.

ASEED came with a big “vintage” banner, which stated: “Agrofuel are no cure for our oil addiction”. Unfortunately, our message is more than ever accurate. You can read more about agrofuels and why it is a fake solution to counteract climate change in our recent flyer “Countering corporate power and fake solution at the climate summit”. Are you now feeling motivated to do something against greenwashing and corporate lies? Read about our plans for the COP21 in Paris here and here and contact us as soon as possible to get one of the last seats in our bus (leaving Amsterdam on Dec 7th, coming back on Dec 14th). 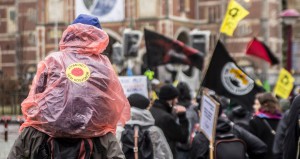