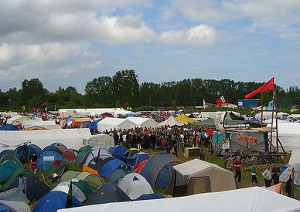 From July 30 to August 3, 2012, an international anti-nuclear camp and network gathering will take place in Döbeln (middle Saxony, Germany). You and your anti-nuclear friends are invited to join, get to know each other, inform about atomic developments and anti-nuclear activities in your region, for skill sharing and for networking. The organisers want to start new campaigns and actions as well as to strengthen the international cooperation in already existing projects. From the camp there will be a possibility to travel to the international blockade and protest camp in Olkiluoto, Finland.

The climate action camp will be a week full of interesting workshops, encounters, direct action, and an ecological way of living. But most of all, it’ll be fun! The two main topics are the protection of very fertile arable land near Leuven which should be used for local food production instead of new industry and a focus on the rule of banks as financiers of big polluters.

The target of the camp is massive open-cast mining of lignite. Thousands of hectares of land are used for this. Several villages have to disappear. All this to continue with the most poluting way of energy production.
The action camp is also supporting a permanent action camp which resists the mining by building tree houses in an endangered forest.

Olkiluoto Blockade Camp in Eurajoki, western Finland, will bring together people from the anti-nuclear movements in Finland and internationally. The camp will be an opportunity to discuss struggles against the nuclear energy industry and for encouraging truly sustainable, decentralized forms of energy.

On August 11, Olkiluoto Blockade action day, people are invited to come and block the roads to the Olkiluoto nuclear power plant by civil disobedience. Year 2012 will mark the third annual blockade.

All libertarians from the various anarchist movements around the world, and all those interested in learning more about anarchism, are invited to gather from August 8-12, 2012 in St-Imier in the Jura mountains in Switzerland.
We will be celebrating the 140th anniversary of the first congress of St-Imier that was held in 1872, when the St-Imier Anarchist International was created after anti-authoritarian members were expelled from Marx’s First International. Since then, the world has changed in some ways with the different libertarian currents evolving in various directions, an aspect that will be well represented at the gathering in St-Imier. Certainly, time has not diminished the ways in which the weakest in society are being oppressed by the most powerful, and the meeting will accordingly address the multitude of approaches to resist these forms of oppression.

This year again the Climate Camp at the Lausitz will create space for networking, sharing knowledge, discussion and direct action. Just as the other climate camp near Cologne, this camp is resisting the mining and use of lignite in the region.

The Anti Nuclear Network NorthEast Germany (AntiAtomBündnis NordOst) – is planning a sailing trip against nuclear power, on which activist want to cruise through the Baltic Sea and get active, be creative and also visible for the public. the organisers invite all active people especially from countries around the Baltic Sea to join us and take part in this sailing trip for a future without nuclear power! For two weeks they will sail and live on the ‘Lovis’ – a big traditional sailing ship with an interesting history, a nice atmosphere and the mission of bringing people together and giving them room for a joined experience of exchanging, sharing and learning (http://www.lovis.de). the group will be on board the ‘Lovis’ on the last stage of its tour along the Baltic Sea coasts and bring a joined message to all the harbours and stops that they will pass on our trip.

A second group will be on their bikes and will be active along the shoreline. There will be regular contact between bikers and the sailors and there will be meetings in some places to do actions together. This group will meet active people from different countries like Denmark, Finland, Sweden, Norway, Poland, Russia, and also from Great Britain and France to state a joint message far a future without nuclear power!

The GÜZ is one of the major places in Germany for the preparation of war. With its regular weapon transportations, the foreseeable construction works on the new urban combat training city, its high tech laser installations and much more, the GÜZ offers to us the opportunity to learn from each other practically, to invent how to bring to a standstill a war machinery. It’s here, that all units of the German army practice for two weeks before they are deployed in Afghanistan or some other war zone. They arrive with their own vehicles, equipments and weapons. The GÜZ is gigantic and hardly fenced in. The schedule for military training is fully booked, delays are not supposed to happen. Ever. The plan is to practically show, that it is possible to stop the war here, where it begins. In this sense the camp organisers welcome all forms of action that mark, block and sabotage the ongoing training in operation!

For all these reasons they call you to come to the anti-militarist camp at the Gefechtsübungszentrum Altmark the 12.-17. September 2012 to join the fight for a better world.

Farmers, citizens and young people will bring their demands for the reform of the Common Agricultural Policy (CAP) directly to the EU institutions. Starting out across Europe, participants will make their way to Brussels by bike, tractor or any other means. On September 19 in Brussels the event ends with an action and conference on a more sustainable and social agriculture in Europe.
Check the website to see where you could hook on to a planned bike tour or other type of caravan.

The chosen theme for the 3rd International Conference on Degrowth for Ecological Sustainability and Social Equity is: “The great transition: degrowth as a passage of civilization”.

the degrowd movement is organising, in fact, this third edition in a historical phase in which we are faced with the necessity of a deep change, a change that asks us to reflect on topics and issues apparently very different – work, income, consumption, waste, energy, technology, mobility, education, citizenship – but actually inextricably linked.

The organisers thought the Conference as an opportunity to confront on degrowth exempt from all reductionism, economical but even ecological or political, and this requires to organize debate and discussion paying attention to connections, interactions, transversal linking, with a strong cross-disciplinary look capable of holding together natural and social sciences.

(credits to EYFA. Most text came from their website: http://www.eyfa.org. And don’t be insulted when you miss the camp you are organising. Just let us know about it.)