[Deze tekst is tot nu toe alleen in het Engels beschikbaar.] From the lignite mines in the Rhineland to the port of Amsterdam or the streets of Paris during the World Climate Summit, the struggles for climate justice are fought at more and more fronts.

Beyond the red lines is the latest movie by Cinerebelde, “an independent media collective that has been producing clips, short films and documentaries about environmental and social movements for twelve years.” If you are familiar with ASEED’s work and info stalls, you have probably already heard of The Strategy of crooked cucumbers, one of Cinerebelde’s previous documentary about a 260 people garden cooperative in Freiburg, Germany.

This time, we are on board for several month of preparation and struggles before and during the COP21 in Paris in 2015.

“Beyond the red lines is the story of a growing movement that says „Enough! Here and no further!” and commits civil disobedience taking the transition towards a climate just society into its own hands.

The year 2015 was marked by human induced climate change increasingly spiraling out of control – and the struggle for climate justice taking place at ever more fronts. In Paris a global climate agreement was adopted. But was it really about saving the planet? While negotiations and greenhouse gas emissions are in full swing, there are worlds between what would be needed to avert runaway climate chaos and the measures actually being taken.

This film portrays three initiatives before and during the World Climate Summit. It shows 1,300 people entering a lignite open cast mine and putting their bodies in the way of giant coal excavators in order to paralyze Europe’s largest source of CO2 for one day (Ende Gelände). We hear the voices of people that block the import of fossil fuels at the harbour of Amsterdam (Climate camp „ground control“ & „Climate Games“). We meet people on a 5,000 km bicycle ride to Paris, providing on their way a common voice for a climate just world to countless local initiatives (Alternatiba). 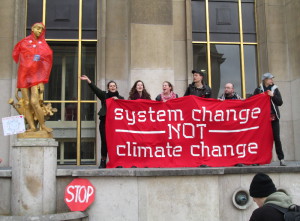 The film also documents how tens of thousands take the streets of Paris during the World Climate Summit despite the proclaimed state of emergency. Meanwhile the largest climate change mobilization recorded in recent history unites more than 785,000 people in 2,200 events in 175 countries.

In the midst of giant machines, raised voices and apocalyptic landscapes, the logic of a system based on endless growth and its “green” crisis management is questioned.

Beyond the red lines is the story of a growing movement that says „Enough! Here and no further!” and commits civil disobedience taking the transition towards a climate just society into its own hands. 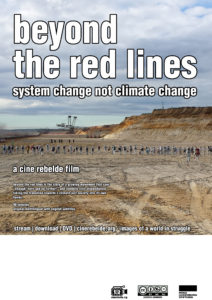