[vertaling volgt nog]  On September 23, 2019, 500 activists in Brunsbüttel, Northern Germany, have blocked the production site of YARA, the world’s largest producer of nitrogen fertilizers. In groups of several hundred people, they occupy the entrance gates. The activists from the climate justice movement thus draw attention to the harmful consequences on the climate by the production of synthetic fertilizers. 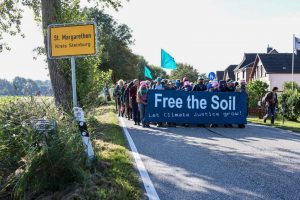 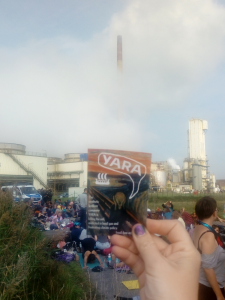 Early in the night an affinity group tried to hang a banner in Yara’s harbour. This was supposed to be visible from the large bridge over the canal and aiming to make the action more visible for the locals. Unfortunately the police was able to prevent this action from taking place and 12 people got arrested for a short time.

Around seven in the evening, 20 people blockaded the third entrance in addition to the two other gates, effectively stopping all road traffic in and out of the Yara plant. Unfortunately this didn’t take long and before nine police started to drag those people out again. 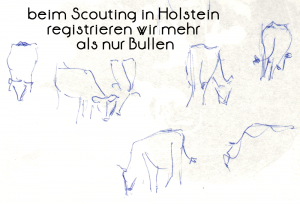 Not all tasks are that visible and exciting. It is also possible that you are somewhere in the countryside hiding in the bushes to check police movements, resulting in plenty of time for some arty moments.