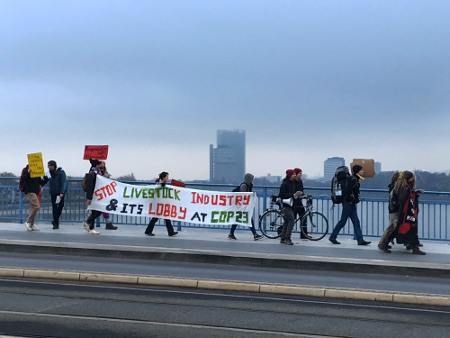 [nog niet beschikbaar in het Nederlands] On November 7, 25 activists demonstrated in Bonn under the slogan “Stop the livestock industry and its lobby at COP23! – DVT: stop facilitating climate change!”. ASEED and the German network Animal Climate Action had called up for the demonstration.

At 10:30 a.m., the action began with an opening rally at the station square in Bonn-Beuel. In front of the headquarters of DVT (Deutscher Verband Tiernahrung), they stridently called attention to the climate impacts of animal production, and in particular the large share thereon of the animal feed industry. Also, they held a first speech and gave out information to pedestrians.

Subsequently, the protest march moved on over Kennedybrücke in the direction of the city, with signs, banners and loud shouts such as “Land grabbing, exploitation, erosion – stop, stop animal production”. The route led through the Rheinaue to the UN- 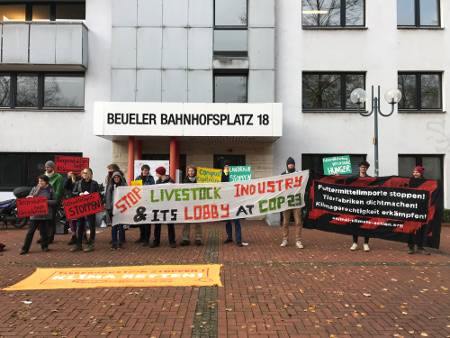 Campus, where the COP23 takes place. There, ASEED held another speech on the insufficient climate protection plans of governments worldwide. Also, the role of corporations, that make profits at the cost of the climate, the environment and the animals, was considered. During the demonstration, various interesting discussions came about between activists and participants of the COP, for instance from Nigeria, Kenya and India.

The final part of the demo led the activists to the Wissenschaftszentrum, one of the venues of the alternative People’s Climate Summit, where a closing rally took place.

The attendant Nayla B. reported: “We stand in solidarity with the actions of Ende Gelände last weekend in the Hambach coal field. If we really want to curb climate change, we need to go where it is 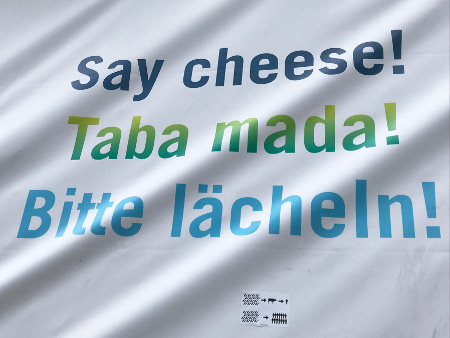 caused – and confront the responsible actors with protest. The German animal production industry belongs to the worlds largest, that’s why the corporations organised in the DVT take a front seat.”

The demonstrator Bo M. additionally said: “Since the COP is now in its 23rd year, substantial progress is still due. The conference does not promise to set the course for curbing climate change, especially as the established situations of production and ownership are not negotiated. For me, the ridiculousness of the COP manifests symbolically in the slogans at the steel-wire armoured borders of the area: ‘Say cheese’ for instance is a sarcastic gag, considering the enormous impacts of animal and especially dairy production on the climate.”

Report in German on the website Animal Climate Action.