[Alleen beschikbaar in het engels] On Thursday, April 5th, the Green Office from the Vrije Universiteit (VU) in Amsterdam organised a debate on pesticides and sustainable agriculture in order to assess the impact of chemical agriculture, and to ‘allow consumers to make a free choice‘.

To do so, the Green Office – ‘neutral on this question’ – invited three guest speakers who would be able to cover the topic from different angles:

Each speaker had 20 minutes for his presentation, followed by a short session of Questions & Answers. Finally, they answered questions together. You can find two of the three presentations at the end of this article.

Jan Bouwman’s presentation started with an overview of Syngenta’s business. The company focuses on ‘crop protection’ (also known as all the chemicals ending with – cide), ‘seeds and traits’ and ‘seed care’ (chemical coating for seeds). Impressive numbers were presented: Syngenta makes “$13 bn per year, it’s actually not so much”, from which 10% are invested in research and development.

M. Bouwman is proud that so much of the money made in sales is used for innovation, unlike in other businesses. However, just a few minutes later he admits that “we are not efficient enough to find new varieties and compounds” and that is why “we have to get together” (in reference to the current wave of mergers between giant agrochemical companies). As a reminder, Syngenta is now owned by Chem-China, a state-owned Chinese chemical company.

Then, Syngenta’s representative listed some challenges humanity is facing such as a growing population, more and more obesity, climate change and a surge in biofuel production. And because of all of this, “improved seeds and agrochemicals are needed to get this done”. “We need better seeds, we need GMO’s, we need agrochemicals”. Indeed, the “we have to feed the world” argument was around the corner. This narrative is widely used by big agrochemical corporations to justify their business, and it has been listed by the International Panel of Experts on Sustainable Food Systems (IPES-Food) as one of the 8 key obstacles to a shift towards more sustainable food systems.

In addition, a recent UN report showed as well that the idea that pesticides are essential to feed a fast-growing global population is a myth. Hilal Elver, the UN’s special rapporteur on the right to food said that “Using more pesticides is nothing to do with getting rid of hunger. According to the UN Food and Agriculture Organisation (FAO), we are able to feed 9 billion people today. Production is definitely increasing, but the problem is poverty, inequality and distribution.”

The presentation moved on to the safety assessment of chemical compounds by independent bodies and regulation agencies, the European Food Safety Authority (EFSA) and the Ducth Board for the Authorisation of Plant Protection Products and Biocides (Ctbg) . Pesticides are safe, because they contain ‘the best-researched compounds in the world’. There was no mention of the many controversies regarding the links between EFSA’s independence from industry lobbies.

M. Bouwman then emphasised on the equation risk = hazard x exposure. Since hazardous substances are used, and will continue to be used in pesticides, they key is to reduce exposure. For example, by avoiding to spray crops during flowering so pollinators would not be exposed. This lead to promoting the best approach

according to Syngenta, ‘Sustainable (integrated) crop protection’. In less convoluted and greenwashed language, this means that Syngenta provides the farmers with a full package: coated seeds, and chemical input.

The presentation finished with a focus on Syngenta’s Good Growth Plan. A few questions or comments followed, in particular about the fact that most of the grain produced in the world end up feeding animals, and that there is currently a lot of food waste. Therefore, producing more is not the right focus. J. Bouwman replied: “I agree. Less food waste, less meat, and we’re good, we don’t need that” (while pointing at the screen where his presentation was still shown).

Indeed, a recent scientific study came to the same conclusion…

Tjerk from ASEED then took the stage. He started his presentation by noting how the industry is careful to use the term ‘crop protection‘ to refer to what he, and many people call ‘agricultural poison‘ or ‘pesticides‘. Indeed, healthy crops do not need chemical protection, they are able to protect themselves as long as they are part of a lively ecosystem. Tjerk underlined that companies are not philanthropic organisations, their goal is to sell (more of their) products. But in the end, the society pays, or will pay, to deal with the damages caused by pesticides, now or in the future. We are the ones paying to clean up polluted water, to face health consequences and to deal with eroded soils.

Tjerk identifies the mainstream approach to agriculture as the main issue, in order to reframe the debate and going beyond the simplistic polarisation of yes or no to pesticides. The ‘Green revolution’ was in fact the massive introduction of a culture of warfare into agriculture: following this model, we fight against nature to kill everything, we consider the soil as dead matter, merely as a substrate that can be doused with chemicals… However, it is widely recognised that this approach is not the right one and that we cannot continue on this path. Tjerk noted an interesting fact: at the same time as this debate was organised, the 2nd International Symposium on Agroecology for Food Security and Nutrition was taking place in Rome.

This symposium was gathering scientists, representatives of civil society and of the private sector, and policy-makers from all over the world, in order to scale up agroecology to reach the UN sustainable development goals. This type of event or news does not seem to reach the Netherlands, a country self-focused on its way, the industrial way. 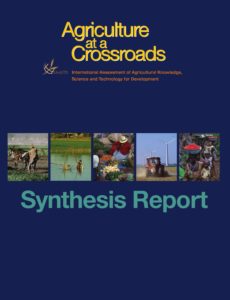 Companies like Syngenta like to focus on the wrong idea that we need more pesticides, more biotech and fewer farmers, ignoring the existence of agroecology as an existing solution to the challenges we face in agriculture. According to the FAO, “There is a broad consensus that agroecology can be instrumental in achieving a wide range of policy, environmental and food security targets, from sustainability-related goals to the reduction of rural poverty.” The International Assessment of Agricultural Knowledge, Science and Technology for Development (IAASTD) already found out in 2008 that a paradigm shift was needed and that agroecology was the way forward.

Indeed, we know that diversity is feeding the world: 70% of the food we consume is produced by small-scale farmers, vs. 30% by the industrial agriculture.

Tjerk then insisted on the fact that we need more independent research to study the effects of pesticides on human, animal and environmental health. The case of endocrine disruptors shows that scientists must explore uncharted territories: the long-lived assumption that the dose determines the strength of the poison is now challenged. In general, it is not normal that potentially dangerous products are left 10 or 20 years on the market before being banned, after either scientists or the society discovered adverse effects!

Despite the fact that Syngenta may employ very friendly and sincere people, the company itself does not behave nicely, especially with independent scientists whose findings threaten its business model. Let’s keep in mind that Syngenta manufactures and sells Paraquat to developing countries, while it has been banned in the EU and most countries of the North.

Since many organisations such as Corporate Europe Observatory are working on exposing the links between the pesticide industry – and therefore Syngenta – and the regulatory agencies and ‘independent’ bodies assessing pesticides’ safety, the public can easily access this information and this topic was not extensively developed. However, Tjerk insisted on the need to invest more public money in scientific research, to avoid academics’ dependency of big companies and private funding.

After Tjerk’s presentation, Dr. Kees van Gestel presented some results of studies conducted at the VU on soil health and pesticides effects. In general, the increasing pesticides use in agriculture use has intensely reduced the complexity of soil food webs, the body mass of soil fauna and the species richness. In other words, the fauna of soils treated with pesticides is less diverse, is made of smaller animals and contains fewer functional groups.

Regarding neonicotinoids, recent review papers show that 96% of the product stays in the soil or in the water 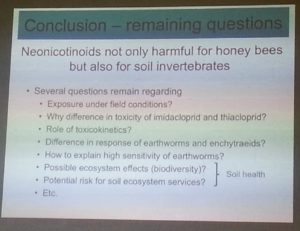 since they are applied directly on seeds as ‘dressing’. Between 0.5 and 2% is lost as dust and less than 2% of the product is absorbed by the crops. Because of their high receptor binding affinity, low-dose exposure over extended periods of time can cause death and paralysis to soil fauna, but also to pollinators such as bees. The same papers identify knowledge gaps on neonicotinoids’ fate in the soil, on their toxicity to soil organisms, on their long-term effects, on their effects on ecosystem services and on mixture toxicity.

After focusing on two compounds (imidacloprid and thiacloprid) and their respective effects on soil insects and worms, Dr. van Gestel concluded his presentation insisting on the many remaining questions. More research is definitely needed to understand the effects of pesticides on soils.

A short session of Q&A followed, in which some people from the audience emphasised on the need to frame the debate around the way we, as humans, consider the environment. Do we see nature as as an external tool, or do we see ourselves as integrated into wide ecosystems? Depending on our answer to that question, we determine if our agricultural system needs pesticides or not. Just as we finish to write this report, the European coordination of La Via Campesina publishes a new publication titled ‘Pesticides out!’, presenting reasons to rule out pesticides and alternatives to their use. More food for though.