[deze tekst van een een flyer voor Parijs is er tot nu toe alleen in het Engels] This is a text about climate change and agriculture. As you are probably well aware, government delegates from across the world are now in Paris talking about climate change.

ASEED, as part of the climate justice movement, finds it absolutely necessary to include agriculture in the climate discussion. To start with, the current food system is responsible for a large part of total greenhouse gas emissions. Furthermore, healthy food is a vital necessity, and universal right, for everybody. We cannot allow the discussion on the future of food production to be dominated by large corporations that only aim to maximise profits. It is time to stand up for just and sustainable alternatives. By taking action together we can make this a reality.

Climate change is hugely affected by the industrial food system. From deforestation to fertiliser use, and from factory farms to supermarket shelves, producing, transporting, consuming, and wasting food accounts for between 44 and 57 % of all greenhouse gas emissions1, 2. 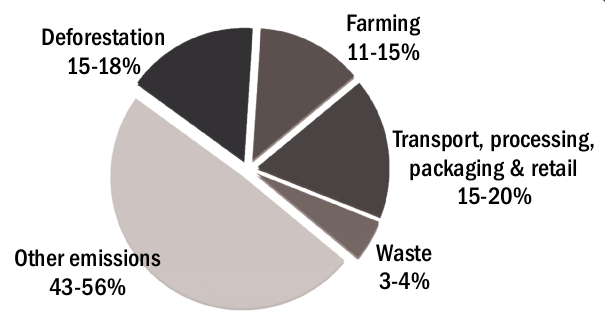 Emissions from agriculture, forestry and fisheries have almost doubled within the past fifty years, and could increase an additional 30% by 2050 without greater efforts to reduce them3. Much of the world’s agricultural land is not intended to grow crops destined for human consumption, but rather to produce biofuels and animal feed. What’s more, nearly one half of the food that is produced is thrown away before it even reaches consumers4. It is evident that in agribusiness, the neoliberal capitalist logic does not aim to feed people but to maximize profit.

The private sector infiltrates every layer of the United Nations Framework Convention on Climate Change (UNFCCC). Corporate power is supported by governments and financial institutions – controlling food production, processing and trade systems, and influencing the direction of scientific research, public policy and law.

Some of the corporations financially backing the COP21 negotiations such as Air France, Renault Nissan and BNP Paribas, as well as energy companies EDF and ENGIE (responsible for nearly half of France’s entire emissions) are in fact, drivers of the climate crisis5.

At COP19, NGOs, social movements and trade unions left the negotiations as a sign of protest against the power of industry and polluting lobbyists during climate talks.

Rather than regulating the destructive activities of corporations, the UNFCCC has been working hand in hand with them, creating new business opportunities for the private sector to continue making huge profits at the expense of the planet.

Currently, there is no political or corporate will to implement real solutions to the climate crises because this will entail major economic and political changes. The kinds of “fake solutions” (explained below) are ‘cosmetic’ , and ignore the fact that climate change is a symptom of larger structural problems rooted in the capitalistic model.

The concept of ‘Climate Smart Agriculture’ was developed by the FAO and World Bank, claiming that the reduction of greenhouse gas emissions, the adaptation of crop growing methods and production increase of crop yields, would largely prevent the climate change6. Several industrialised countries together with a number of agribusiness and fertiliser corporations are now the most enthusiastic promoters of the concept7.

However, ‘Climate Smart Agriculture’ is not such a smart solution to the food and the climate crises since, in reality, the term lacks meaningful criteria to define what is ‘climate smart’. Parties involved in the Global Alliance for Climate-Smart Agriculture are simply talking about further intensifying agricultural methods in an industrial fashion: more machines, external inputs, GMOs, more capital. Furthermore, there are no safeguards to prevent destructive actions such as land grabbing in the name of ‘Climate Smart Agriculture’8.

A result of the Kyoto Protocol, carbon trading is an exchange of credits between nations and is designed to reduce emissions of carbon dioxide9. The carbon trade allows countries that have higher carbon emissions to purchase the right to release more (from countries that have lower emissions). The initial amount of ‘carbon credits’ that countries and companies received depended on their emissions prior to the Protocol. However the system is unfair, given that developed countries have more purchasing power.

Emission trading makes it possible for countries and companies to continue business as usual within the capitalist system that is the root of (no! western) overconsumption, pollution and injustice. Emission trading is distracting attention from wider, systemic changes and collective political action that needs to be taken to tackle climate change.

Biomass is material derived from living, or recently living organisms and is used mainly in power plants as an alternative to fossil fuels. The word biofuel normally refers to a liquid fuel produced through biological processes, and is often used within the transport sector. Both biomass and biofuels are competing with food production for arable land10. Often biomass is considered to be waste, but all nutrients taken out of the soil have to be replaced to prevent the soil from degradation.

According to the International Land Coalition, biofuels were responsible for around 59% of all land grabs between 2000 and 2010. Despite being presented as a renewable and climate neutral source of energy, in reality the practice is not that green. The production of crops for biofuel is often a devastating activity that requires a high energy input. The production of fuel using soy, corn or grain actually requires almost the same amount of fuel it produces. Whilst increasing demand for land, burning wood for electricity releases significantly more CO2 into the atmosphere than burning coal11. Biofuels and biomass are simply inefficient substitutes for fossil fuels.

None of the mentioned false solutions can effectively work, given that they all counter the only real solution: a shift from the industrial food system governed by corporations to local food systems. It is crucial to:

– Keep fossil fuels in the ground: We need to switch towards agricultural methods that are not dependent on high energy inputs in the form of oil and gas for the production of artificial fertilizers and pesticides, and the use of machinery.

– Care for the Earth: It is necessary to return organic matter to the soil. This will reduce the amount of carbon in the atmosphere and increase the water absorbing capacity which makes it possible for plants to survive dry periods. We have to focus on organic farming and stop using agro toxins and chemicals. It is crucial to promote small-scale, mixed farms based on the science of agroecology12.

– Eat local produce: In contrast to the corporate logic of carrying food around the world and back, it is important to reduce food miles and promote the local consumption of fresh food. This would also reduce the global need for fuel, and consequently for biofuel.

– Redistribute farmland: It is vital to stop mega farms and give land for the development of small and local food systems. Small scale farmers prove that their methods work. Currently occupying less than 25% of the world’s land, they produce more than half of the world’s food using planet-friendly agroecology practices13.

To conclude, it is clear that the short-sighted market solutions to climate change proposed by politicians and corporations are by no means good enough. They are simply keeping alive a devastating industrial food system at the expense of the planet and its resources. Therefore, we must focus on our alternatives and continue to campaign against agri-food business and their activities.

Let’s join together to make this happen!

Download the flyer as PDF in English or in French.

4 Grain – ¨How much of world’s greenhouse gas emissions come from agriculture?¨: https://www.grain.org/article/entries/5272-how-much-of-world-s-greenhouse-gas-emissions-come-from-agriculture

GRAIN – ¨Food sovereignty: 5 steps to cool the planet and feed its people¨: https://www.grain.org/article/entries/5102-food-sovereignty-5-steps-to-cool-the-planet-and-feed-its-people