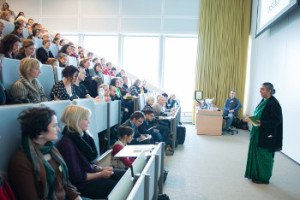 [dit verslag bestaat nog niet in het Nederlands]
Vandana Shiva: The right to use your own seeds is a fundamental right. The seed freedom is intimately related to food freedom. Owning the creation of nature by shifting genes is wrong in all forms, including any law or compulsory regulation to privatize the intellectual and biological commons through patents and breeders rights. In the era of seed freedom the big challenge is to deal with laws that impose uniformity and monopoly. It is bad science to impose uniformity in a world that can only produce sustainably through diversity. Every dictatorship has used uniformity. Uniformity is totally against the law of nature. The real law of the seeds has to be based on biodiversity and resilience, on reclaiming the commons. The world needs free sharing of seed and the growing of good food through good seed. And that is something we will do and have to be doing until the seeds are free and we are free.

Seeds need to evolve, not be kept in a frozen seed bank. Bring the seeds back to life and back to the people. We can’t leave seeds to the chemical industry who only know the laws of profit and destruction. 70% of the food is grown by small farmers, 30% is industrial. They are the niche, how can they dictate the food system and claim monopoly?

Seeds are too precious to humanity. Food comes from sun, seeds, soil and our work. All creative action at the local level. I don’t fear, it’s from love that my energy comes. Celebrate the earth family, celebrate biodiversity and reclaim the seeds. The fight for seed freedom continues in the tradition of Ghandi, Martin Luther King and Nelson Mandela. That tradition can never be extinguished.

Ivan Mammana: In the 90’s the chemical industry arrived on the seed market. Since then we have seen a strong concentration. Now the top 5 companies control 61% of the seed market. In the case of maize, just 5 seed companies control around 75% of the EU market share. In the case of sugar beet, just 4 companies control around 86% of the market and 8 companies together control 99% of EU market. In the vegetable sector for example, 95% of the market is controlled by a mere 5 companies. The agro-chemical/seed company Monsanto alone controlled in 2008 around 24% of the EU seed vegetable market. The question is therefore: is the EU seed market really as diversified as the European Commission wants lawmakers and the general public to believe? Or is this market in fact transforming rapidly from a seed sector with a large number of competing small firms and farmers into an oligopoly, increasingly dominated by a small number of transnational agro-chemical-seed firms?

Elly Janssen: Main objections to EU seed law 2013:
– bad for biodiversity + increased market concentration;
– regulation applies to ALL SEEDS SOLD, not just the few hundred main agricultural;
– naturally heterogeneous, open pollinated seeds do not comply with criteria and cannot be registered;
– registration is too complex and too expensive for small businesses/farmers: illegalising trade;
– when adopted this EU law is will be a model for regulation in other parts of the World.
The EU Seed regulation is turned down by Agricultural and Environmental Commission plus EU Parliament itself (feb 2014). EU Commission can withdraw proposal but also produce a new slightly altered version to the new parliament.

1  Celebrate the fact that we can grow food. Plant gardens of hope everywhere.
2  Save and swap seeds. Let seeds of freedom speak everywhere.
3  Localize our food system. Change buying, start growing. At home, in schools, hospitals, companies. Celebrate the diversity of crops and healthy soil
4  Deal with wrong laws and threats together. Change the course of discussion.