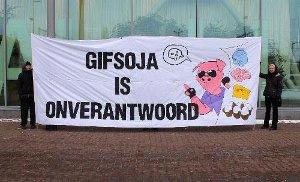 Thursday February 9th (2012) Ahold has received 26.000 autographs from consumers from different European countries.[1] They asked the supermarkets to stop misleading the consumer with fake sustainability claims. The protest is specifically targeted at the Round Table for Responsible Soy (RTRS). Hugo Byrnes, who represents Ahold in the RTRS, did not want to accept the autographs himself, even though just before he had had a conversation with us. Ahold’s spokesperson, Jochem van Laarschot, did accept the autographs, but did not want to give any further comments. 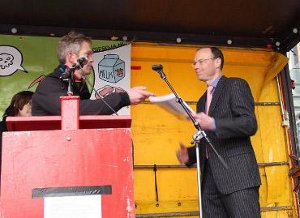 Prior to the handover representatives of several organisations spoke about the abuses caused by the large-scale soy cultivation. The day was opened by Nina Holland of CEO who represented in a clear way that the criteria of the RTRS are so weak that no real change in the way of production is needed to get an RTRS-certificate. Camiel Donicie of FIAN Netherlands told the audience how the soy cultivation undermines the food sovereignty of local people. Luc Vankrinkelsven of Wervel spoke about the concern of the Belgium NGOs about the fact that in the Netherlands the NGOs are often in favour of the RTRS. Guus Geurts of Platform ABC mentioned that it is also important to increase the importtaxes of soy, so that it is profitable again for farmers here to grow local proteins. Jorge Galeano (liva via phone live from Paraguay) told us that the RTRS is called the Round Table of Lies in Paraguay and spoke about the negative consequences of soy cultivation there and Meike Vierstra told us about the ASEED campaign and why and how this is targeted against Albert Heijn, the only Dutch supermarket that is a member of the RTRS. 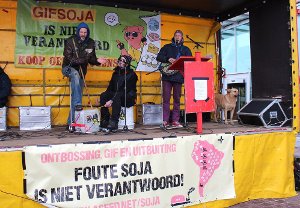 With the handing over of the petition we have want to make clear that Ahold is on the wrong track. “The criteria of the Round Table on Responsible Soy (RTRS) are very weak. Soy plantations can still be expanded at the expense of forest and small farmers. The large-scale use of pesticides is not addressed and keeps poisoning man and environment.” [2]

Meike Vierstra (ASEED Europe) says: “Ahold, consumers do not want this lie, step out of the RTRS and show that you strive for real sustainability.”