Tuesday October 28th was the day of the appeal in Gent for the activists who got arrested for being part of the potato swap in May 2011 in Wetteren.

The “field liberators” were heavily supported, not only on de Kouter square where a farmers’ market and diverse activities took place all day, but also in the courtroom that was filled with friends, sympathizers, and diverse groups such as the French Faucheurs Volontaires.

In addition, more than 50 organisations and opinion leaders had signed a message of support prior to the hearing.  The lawyers defending the potato activists made a strong point at the opening of the hearing: this trial respresents a societal choice, as the defendants can either be seen as heroes or criminals. They certainly refused to be accused of forming a criminal organisation, as their action was publicly prepared and their goals far from being similar to those of actual “gangs”. Indeed, what is at stake in this case are the definitions of freedom of expression and civic disobedience, both at Belgian and European level.

Non-violent citizens’ action is not a crime! The activists’ lawyers pointed to a couple of questions that would make anyone smile, if the defendants did not face such heavy sentences: what kind of criminal activity gathers counter-protestants? And how is it possible to designate one of them as the “leader”, when the Field Liberation Movement claims to be anarchist and therefore, non-hierarchical?

The verdict is expected on December 23rd.  See the links of press coverage listed here. 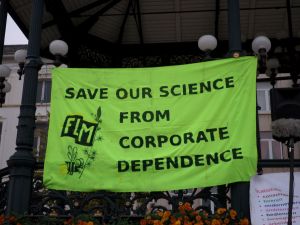