Krems, August 21st – Europe’s people are now experiencing the first structural adjustment policies which governments are imposing on their populations that until now have been imposed on peoples in other regions in particular the Global South; this with the sole interest of saving capitalism and those who benefit from it (private banks, investment groups and transnational corporations). All signs are that in the near future these antisocial policies will become more severe and extensive. The first general mobilizations to denounce the economic and governance systems which have brought us to this point have begun and we offer – creatively and energetically – the response of European social movements to confront the model of global agriculture which is the exact reflection of the capitalist system that created it.
… verder lezen 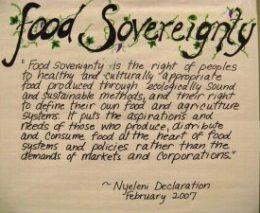 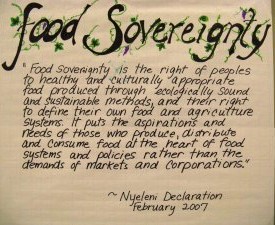 This article is only available in Dutch. (If you want you can help us translating articles)

2012: Year of Action for Solidarity, Equality, Environment and Diversity. (English version below)

From 2 to 4 May 2011 ASEED organised three days of camping at the farm GAOS in the Flevopolder (NL). With workshops, discussions and action around biotech, bio-industry and alternatives to industrial … verder lezen

While things are heating up towards the COP 15, ASEED’s goal is to draw attention to climate pollution caused by industrial agriculture and the food system. Joining the international Climate Justice Action network we are now mobilising Dutch protesters to come to Copenhagen. A series of eight climate agro-info events around The Netherlands is coming to a close, and the Copenhagen Agriculture Action Day on December 15th is taking shape.
Meanwhile the official Dutch/EU GMO conference on November 25 is in desperate need of some sensible ASEED input…..
… verder lezen

As scientific predictions of climate catastrophe continue to grow, world leaders gather in Copenhagen on 7-18 December 2009 at the United Nations Framework Convention on Climate Change (UNFCCC) – and the world waits for action. The people are ready to change the world in order to save it –  but so far government solutions have revolved around setting up market mechanisms to avoid making real changes – and the climate crisis continues to grow.… verder lezen

In Paraguay, the expansion of monocultures like soy leads to an agricultural model in which peasants have no stand. The soy production model is an export-orientated agro-industrial model that generates wealth for a few and poverty for many. Almost half of the population in Paraguay consists of farmers, peasants and indigenous, while land concentration in terms of the percentage of land that is in the hands of large landholders, is one of the highest of the world. The lack of access to land causes poverty, malnutrition, social marginalisation, rural unemployment and the migration of hundreds of families. For this reason, land reform is one of the most important challenges that the country faces. Since July 2006 the MCNOC (National coordination platform of peasant organizations) reintensified their campaign for integral land reform. In response, communities have been violently repressed by militaries and police forces. Thousands of families are currently living under threat.