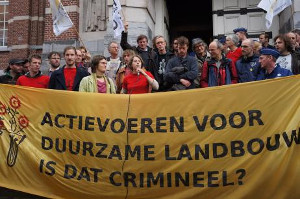 On September 24th the Court of Dendermonde, Belgium, convicted 11 activists of organised crime in relation to their participation in a day of action against a GM potato field which took place in Wetteren on May 29th, 2011. The activists were convicted of criminal gang forming, criminal damage and resisting arrest, and were given suspended prison sentences of between 3 and 6 ,months, plus fines, damages and court costs totalling more than 25 thousand euros.[:]

There was some relief among the activists on hearing the verdict, but also concern that this verdict creates an extremely dangerous precedent for everyone who values the right of citizens to freedom of speech. This is the first time that environmental activists have been convicted of organised crime charges in Belgium. The activists plan to appeal against todays’ verdict.

”This conviction for organised crime is completely out of proportion with the ‘crime’ of uprooting a few potatoes from a controversial GM crop which was grown for mainly promotional reasons.” said Barbara Van Dyck, one of the defendants. ‘ The aim of the action was to trigger public debate about the introduction of GMOs into agriculture. The field trial itself was later found by a separate court to be unlawful because they did not have a valid permit for the crop.’

‘The criminalisation and harsh sentencing of the activists distracts attention from the real issue:the introduction of genetically modified organisms into agriculture’ added fellow defendant François de Saint-Georges. ‘The patenting of genetically modified seeds takes control of our food system away from farmers and communities and hands it over to a
small number multinational companies. The use of GM technology in agriculture denies us food sovereignty and entails unnecessary risks for the environment and human health, and is opposed by people all over the world. We already know how to grow sustainable and healthy food for everyone without GMOs’.

The eleven activists and their lawyers are now getting ready for the next step. ‘This ruling is contradictory’ points out their lawyer Mieke van den Broek. ‘ convicting people for such a serious crime as forming an organised criminal gang, and then giving them purely symbolic sentences. Legal professionals have already pointed out the many other legal absurdities in this case. (1)

Green MEP Bart Staes, one of the almost one hundred voluntary defendants in the trial, reacted to today’s ruling: “convicting this group of people of charges related to organised crime creates a very dangerous precedent which is extremely damaging for democracy. It threatens to discourage future actions by other social movements such as the peace and environmental movements and the unions.”

The judge refused to acknowledge the voluntary defendants who had asked to be judged alongside the 11 activists, but these supporters of the action in Wetteren are not deterred and will find other ways to show their solidarity and support.

Prior to the action there had been very little public debate in Flanders about the need for and desirability of genetically modified organisms. This is now beginning to happen, with more and more people forming an opinion and taking a stand on the issue. It is becoming clear that this is a social question which we cannot afford to leave exclusively in the hands of technical experts.

Recently, renowned choreographer Anne Teresa de Keersmaeker made a public statement in support of the activists, and last weekworld famous researcher and activist Vandana Shiva, in Belgium to raise awareness around European seed regulation, encouraged the activists to continue to take action against the undemocratic and unjust industrial agriculture system.

Despite the growing public opposition the Flemish government is continuing to promote genetically modified crops with new field trials, including a GM maize field which will run from 2012 to 2014, and a proposed seven year GM poplar trial, due to start in 2014.

More info on the action and the trial: www.fieldliberation.org

Notes:
1.  www.legalworld.be/legalworld/Als-de-rechter-kijft-en-slaat-krijgt-de-rechtsstaat-klappen.html?LangType=2067&utm_source=LegalWorld.nl&utm_medium=Ezine&utm_campaign=Ezine%202013.03.28
2. You can listen to Vandava Shiva’s message of support in English here : https://vimeo.com/75279203
3. For more information, go to the Field Liberation Movement website: http://www.fieldliberation.org/category/about/?lang=en