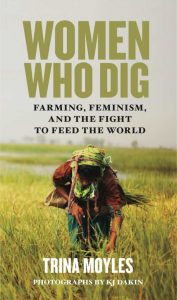 Once more we came together in the ASEED office for an inspiring, touching and challenging reading group. It seemed like we were mostly referring to the book “Women who dig”, but we also discussed the other articles as well as our own exerpiences and thoughts related to the readings.

To start with, most people found the chapter about Uganda very striking and liked how it was written. Even though it is very horrifying to read, since it is very emotional and raw in the sense of not being shaped into a nice story but just the terryifing reality, it showed very clear examples of extreme gender inequality. The chapter describes how women have to work in the field, give birth in the field, have to do all the care work and on top of that face domestic violence. We spoke about how, on the one hand, this violence and inequality seem very extreme and much worse than in a context such as the one of the Netherlands, but, on the other hand, we underlined how we should be careful in glorifying ‘our’ own situation. Gender inequality and gender related violence may arise in the Netherlands in a different form, however this does not mean that it should not be targeted as an issue of discussion and action.

Besides, related to the context in Uganda, we were thinking about how we can stand in meaningful solidarity to the women who are trying to speak up and fight for change whereby they are risiking their lifes. In a way, it is very clear what has to change: overcoming patriarchy and capitalism – but how? This is the real question! We were discussing that it could be helpful to strengthen the already existing women networks in Uganda. We believe that it could be a good first step to create these safe spaces in order to first of all show that there are alternatives to the status quo and second, how they may look like. Providing a space to feel inspired, to network, to feel connected with others going through a similar struggle. This could ideally lead to feeling empowered and gaining the necessary strength to resist.

Another idea that came up, was that it could be helpful for the women who are in parliament to connect with the women on the ground. This could be an entrance point into the existing system in order to transform it. Perhaps NGOs from the outside could facilitate this process by helping to create safe spaces and connecting to human rights advocates, lawyers and such, if requested by the community. Overall, this discussion was extremly overwhelming because we feel this constant dilemma of wanting to be solidaire, and at the same time not taking on the role of the “white saviour”.

Furthermore, the demand to achieve collective responsibility of care work, came up across the readings. The caring for children, eldery and anyone else who is in need of being take care of, should not only be accomplished by women but by all genders and it needs to be valued more. They are not “economically inactive” as those women are being referred to but the opposite. In fact, they are taking care of the next generation which is one of the most valuable, challenging and responsible roles one can have in our society.

The second main struggle within the discussion which came up again and again is the fact that it can seem useless to try to change little things step by step within a system that does not allow opportunities for sustainable, long-term changes in terms of redistributing power and wealth. Where is the point in fighting for a right to own land within a capitalistic, patriarchal and neocolonial society? Fighting against the symptoms is simply not enough anymore, the root of gender injustice needs to be targeted. The readings from this reading group showed very clearly that we have to get away from an ideological battle between men and women because it is not getting us anywhere. We have to stop blaming each other since we need to overcome racism and sexism not only on an individual level but far beyond, namely on a systemic and structural level.