The struggle to keep the Lutkemeerpolder in its current state – as a fertile ground for agriculture and community– has been going on for many years. On Monday, September 6th, SADC, in part owned by the municipality took their next step in the process of preparing the ground for construction. Here is a reflection piece of a group of activists who took part in the demonstration against the SADC’s plan:
It is 6:30 on a Monday morning and instead of being at home in our warm beds getting ready for the week, we are peeling ourselves out of sleeping bags close to the Lutkemeerpolder in the far West of Amsterdam. We are not here to watch the beautiful sunrise that one can witness in the polder (which nevertheless made our morning less bitter), but because we have received the information that today, construction is supposed to be starting here, on the Lutkemeerpolder, one of the last places in Amsterdam with healthy, fertile soil. Almost a year ago, the Tuinen van Lutkemeer and the small occupation of the polder got evicted (1). This, however, did not stop people from relentlessly keeping up the resistance and fighting the neoliberal plans of GroenLinks and SADC (Schiphol Area Development Company); unfortunately, their decision to irreversibly destroy the fertile ground of the polder, in order to build a distribution center has remained unchanged. GroenLinks keeps talking about “a social and sustainable way out of the [corona] crisis” (2), but apparently local food production and protecting green space do not seem to be part of their plan.
In the light of all his, we are now spread out over the different entrances to the polder to prevent any machines from entering and further destroying the terrain. For a while it seems quite calm but it does not take long for an industrial mower to arrive to cut down all the grass that has grown there, which has now replaced what were once thriving sunflowers, corn and pumpkins.
While our first attempts to block the mower from entering seem successful, eventually the police make sure that nothing stands between the machine and the polder and in doing so does not shy away from pushing people to the ground, out of the tractor’s way.
While the mower is busy preparing the polder for the next step of its destruction, we are also busy trying to make sure that no other machine can follow into the polder, by digging trenches in the most important entrance. Slowly, the police are cracking in on us, arresting people and pulling away anyone who could witness what exactly the police are up to in front of the entrance. Even during a global pandemic, the police are not wearing face masks, even while arresting bystanders! One activist is treated with utter carelessness – sand digger is removing material only a few centimeters away from them! It is a very disheartening scene.
After a few people are arrested and the crowd is ushered away, more machines enter the polder, a new pathway for heavy duty machines is being constructed and cameras are installed to watch over the polder as it is turned into a construction site for the next weeks and maybe months.
At 19:30 a noise demo is organized at Stopera and many people show up to offer their support towards the Lutkemeerpolder. There are a few moving speeches from the farmers closely connected to the polder, mentioning once again the importance of local food production, especially as the corona virus is showing how vulnerable our current food system is. Replacing fertile ground with a ‘green’ distribution center is not a sustainable decision, which was clear to the almost 250 participants of the demonstration. We walked around the city hall while making lots of noise with pots, pans and drums, to make ourselves noticed and heard. Needless to say, we are all maintaining the social distance and wearing masks, making sure we protect each other.
On 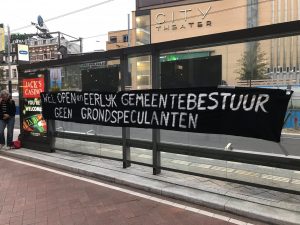 Wednesday, September 16th., there is a small demonstration in front of De Balie in Amsterdam, where Marieke van Doornink speaks about sustainability and the influence of activism on city planning, under the theme “Savior of the City”. But what is actually being saved? An activist from the Behoud Lutkemeer platform is actively asking this question and demands from Marieke and the entire city government to have “Dutch Courage” – to understand what once was a good plan, may not be good any more and act accordingly. We couldn’t agree more! You can see the whole speech here.
We are still resistant
Amsterdam portrays itself as a very green and progressive city. However, instead of protecting existing valuable green space, they build “circular” business-parks. But who knows, will the industrial terrain in the Lutkemeer actually be used? As of now, nobody knows who the buyer of the land actually is, who will in fact profit off this space. So the city is not only not green, their plan does not even make sense on a purely economic level. All of t 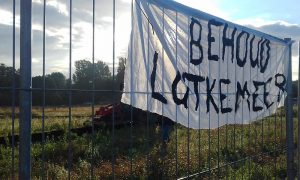 his, while there are other spaces of the same size, which are empty and could be used for the business purpose…
Now, where before wild flowers were blooming, there are piles of soil, heavy machinery and containers. The polder is being prepared for construction, but we cannot accept that this is it and the struggle is lost. There are still no wires or pipes laid. There is still no sand covering this valuable resource. There is, on the other hand, an abundance of wonderful, diverse people, from neighbors to farmers to students to long term activists to regular gardeners, who still stand behind the polder. There is still the possibility that this government puts action behind it’s words to take seriously the climate crisis and rezone the polder back to it’s most sustainable and valuable use: agrarian.
On the Fridays for Future action days on the 25th of September, there will be a cycling tour from the polder to the Stopera. If you want to get involved yourself, make sure to subscribe to the Alarm-list (info@behoudlutkemeer.nl), which informs you as soon as many people are needed at the polder. Furthermore, you can check out the list of small and meaningful actions you can take to persuade the municipality that they still have time to change course, by checking out the list here.
For the police and the municipality, the Lutkemeer is just a field, something to be used, it is only valuable in its potential to generate capital for a small number of people. However, we feel that what happens here is a symptom of a national and global problem – a continued focus on economy and profitability over creating a world that could be more resilient in these times of ecological crisis, a world where the planet and the people are placed above profit. This polder is part of creating a more autonomous food system, making the city more resilient against floods and droughts, preventing further biodiversity loss, and so much more.
SOURCES
(1) https://poldersquash.wixsite.com/lutkeblijft?fbclid=IwAR3595R8qh7xxObYrdxJPvTlJmEcvDTGJsQ4UU-vKy9JwP_aSdQ1mENOGkY
(2) https://amsterdam.groenlinks.nl/nieuws/sociaal-en-duurzaam-de-crisis-uit
Posted on:
21.09.20