“A policy that promises salvation from the present crisis can only lead to a proper social system if it is ecological”. – Abdullah Öcalan

On the 23rd of February 2020, ASEED attended a workshop organized by Internationalist Commune of Rojava and Make Rojava Green Again campaign about the Rojava revolution and its principles. The workshop was held at the former squat now legalized ACU.

The idea was to understand how social and climate justice movements in Europe can be inspired by the principles of social ecology and democratic confederalism that have been put into practice in the Rojava region.

Rojava is the familiar name for the Autonomous Administ 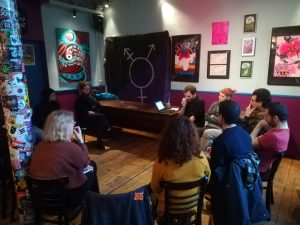 ration of North and East Syria (NES), which consists of self-governing sub-regions and gained the autonomy in 2012 in the context of the Syrian Civil War. The regions governance structure is based on the libertarian socialist ideology inspired by the founder of the Kurdish Workers Party (PKK) Abdullah Ocalan, who fought for an independent Kurdish state. Ocalan advocates for democratic confederalism, inspired by Murray Bookchin’s libertarian socialist idea of communalism. Since 2016, Turkish rebel forces have been fighting against Rojava supporters. The autonomous regions govern themselves on the basis of democratic confederalism, social ecology, gender equality and decentralization. Over the past years, several movements recognized the importance of the events happening in Rojava and internationalists joined the fight in support of Rojava autonomy and Rojava socio-political building.

What can we learn?

During the workshop, we explored the key principles of the revolution, as exposed below.

Democratic confederalism rejects the nation-state model and it proposes a decentralized democratic bottom-up organization based on direct democracy model. Concretely, the democratic confederalism in the region takes the form of several councils, each responsible for a different activity (e.g. Council for Agriculture, Council for Energy and Water access etc.).They call this internal organization  “commune” and it exists at the level of hamlets, villages, and town neighbourhoods.

Social ecology posits that environmental problems will be resolved only if social issues such as industrial expansion and classes inequality are also resolved. Ecology thus needs to be combined with bottom-up social equality and democracy.

In Rojava, the struggle of women started in the form of a female secular military force for Kurdish independence and then developed as a wider struggle against male domination within the Kurdish community and the Middle East.

In short, Rojava is a living laboratory for radical democracy, social ecology, gender equality, women empowerment and communalism. They fight against patriarchy and capitalism by recognizing the links between the environmental, social, political and economic crises of the current worldwide configuration.

To this extent, social and climate justice movement can be inspired by the links that Rojava made between direct democratic participation, ecology and social equality.

In the workshop, questions emerged about the forms of education adopted, how decision-making processes are made and the risk of authoritarian power emergence. Decision-making is bottom-up and horizontal and confrontation often comes from trial and error attempts (e.g. people acting in a certain way and then defining the outcomes and the problems) followed by reflection. Power relations are anti-hierarchical and decentralization of military groups and councils diminishes the risk of authoritarian drift. Education is based on the principles of environmental justice, social equality and inclusion and support of biodiversity and ecological reconstruction.

Finally, given the complexity of the revolution and the history of the region, it is important not to project Western values and to keep connecting and learning from the people who joined the movement in Rojava.