Reclaim Power, Reclaim our economy… and we could go on and on with the things we should acquire control of again or should take into our own hands again. But we are working on it! It has been no less two months since the last SEEDmail was published. That is what happens when you are busy with the organization of all kinds of new activities. And with the acquisition of donors and subsidy in order to improve our financial position a little. Time for an update: 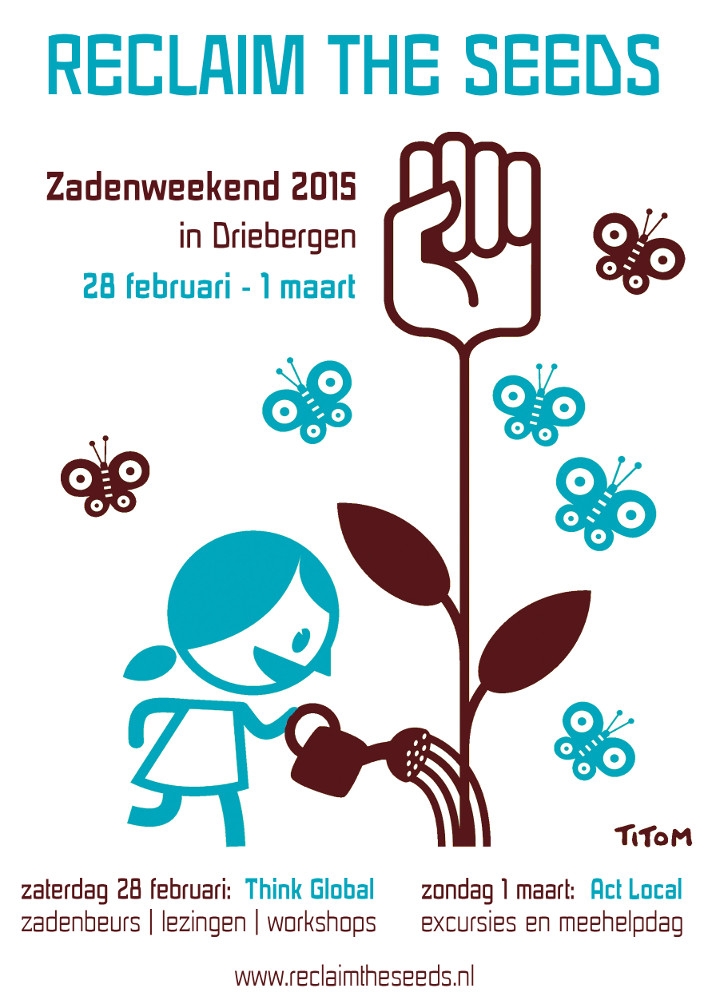 The fourth edition of the seed weekend was already announced in a previous SEEDmail, but now the stalls and the workshop program have been announced. At the market on Saturday you can find, in addition to most fixed suppliers of seeds, tubers and critical information on agriculture, a number of extra stalls from the vicinity of Driebergen. Highlights in the workshop program include a workshop ‘Humisme’ about a healthy soil, a presentation of the new initiative ProSpecies Rara Nederland and a meeting on the relation between agriculture and climate change.

In the vicinity of Driebergen various communal gardening projects can be found. They can be visited during excursions on Sunday March 1.

We can still use some more assistance! This involves, among other things, arranging transportation and handling a whisper translation during the workshop. Give a helping hand to make this weekend a success and sign up through info@reclaimtheseeds.nl

More information on the program and the route can be found on http://reclaimtheseeds.nl.

Be ready in the beginning of July for an agriculture and climate action camp near Amsterdam! The second edition of the Climate Games will be happening on July 4th in the same area, with the aim of playing around some of the major polluters in Amsterdam’s port.

An action camp is a great place to learn about new topics, campaign strategies and forms of actions. As a participant in an action camp, you also get to make friends with a bunch of nice people. Above all, this first week of July will be the time to prepare and carry out actions.

For now, the camp initiative is pulled by a small group of people, but we need support to organise a successful international camp! Would you like to help ? Please send a message to: actioncamp2015@aseed.net.

March 18 : Blockupy in solidarity with Greece and against TTIP

March 18 is rapidly approaching. On that day the European Central Bank will inaugurate its new, €1.3 billion skyscraper. The activists united in Blockupy will seize this opportunity to make clear that there there is no reason to party. A protest is planned against the TTIP and to show solidarity with people in Greece.

April 18, 2015 – global day of Action against the current model of trade and investment

A large group of civil society organisations and movements across the oceans are calling for a day of action against all Free Trade and Investment treaties on April 18th. Not only that we have come together to oppose this economic and trade model, but also to propose a new economy and way of life that works sustainably for all people and the planet.

Join the fight by making your own event or by joining a local event. ASEED will add a link to the official call to action and events on its website in April.

As an individual you can also sign the European’s citizens initiative.

campaign at ASEED please send an email to Paulina@aseed.net

The Northern Seeds Network is starting!

The Northern Seeds Network (Noordelijk Zadennetwerk) has started after the Reclaim the Seeds weekend in Haren in 2014. It aims at bringing together people who are interested in seeds, food, and heirloom varieties and at connecting the political aspects of crops, seeds, and food. Participants can swap and share seeds with each other through an online platform and “offline” markets. The network also organises tastings, workshops on seed cultivation, and provides information about many related topics including politics.

The first major activity organized by the Northern Seeds Network will be a seed market on Saturday, March 7th, 2015 in Groningen.

A newspaper about the Free Trade Agreement between the EU en the US has been produced in Dutch. The paper version is distributed widely in the Netherlands and Belgium, but you can also have  a look at it online as a pdf or online magazine.

The outcome of the appeal of the 11 Field Liberators of Wetteren was finally known in the end of 2014. The GMO-free agriculture activists have been rightfully acquitted of charges of being part of a criminal gang! This is a victory for the organisations, lawyers and activists who opposed the initial sentence.

However, the protesters have to pay a compensation of about €18,000 to the ILVO and the Hogeschool of Gent. The activists suggest to use this money for research into agro-ecological agriculture, which focuses on the farmers and consumers’ needs instead of multinational corporations.

Yes, you can still donate money to ASEED! If our campaign work is important to you, please consider to support us and become a donor. We will be eternally grateful for that! And for those of you who already have become donors: thank you!

Read more about the different ways to become a donor here: https://aseed.net/donate/