Welcome to ASEED’s irregular newsletter SEEDmail. Wow, four months since the previous one! That’s what happens when you’re too busy organizing all sorts of new activities. There has also been some personnel change in the office. Some experienced people stopped or decided to do less for ASEED, while in May we could welcome two new volunteers within the European Volunteer Service programme. Already obvious they’re a great addition to the understaffed team, and good timing too, because with the Ground Control action camp coming close, it’s all hands on deck. Time for an update. 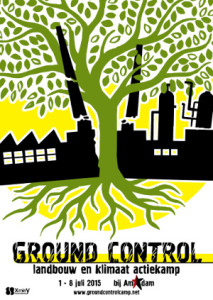 This summer we will break new ground for action! During a weeklong camp near Amsterdam we will get together to stimulate a different agricultural system and counteract climate change. Come and join us!

Since the environmental question entered the political debate, countless quick fixes have been developed to deal with some of the symptoms of climate change, leaving its root causes untouched. In December the “world leaders” will meet in Paris for COP21; yet another international climate summit after the previous failures. Meanwhile, the city of Amsterdam is planning to expand the activity in its port, which is the second largest throughput of coal in Europe and hosts some of the world’s most polluting companies.

The stakes are too high for us to remain silent observers in this game: we refuse to let corporate interests gain new ground. This time, we will play by our rules. More information on the website of the action camp. This website also contains more information about the programme you can expect at the action camp. A more detailed overview with workshops and times will be published on the site soon.

Action camps in the summer of 2015
It’s time to enjoy climate change and the arriving hot summer. Venture out to camp! ASEED made a quick overview of some interesting upcoming action camps.

Garden signs “GM-free, patent-free, and pesticide-free”
ASEED made a stack of wood signs with this statement to be placed in gardens. People who choose to grow their veggies without genetically 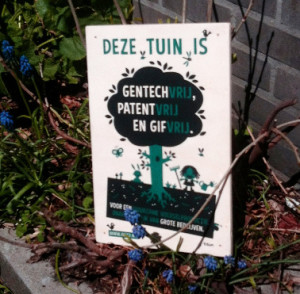 modified crops, patented seeds, and without using pesticides, now have the possibility to turn this choice into a clear message to the rest of the world. While stocks last you can also obtain such a sign for your garden. On the condition you will place is in plain view for passers-by. The signs are handmade using only the most sustainable materials available and cost €10,- (plus postage).

We would appreciate it if you send us pictures of the sign in your garden. We will collect all garden sign pictures on a website to illustrate how widespread the resistance to these dirty practices and large seed and pesticide corporations is. More information on ASEEDs website. You can order a sign via info@aseed.net.

The drawing was made by Titom, a Brussels artist who makes a lot of political posters and flyers. An overview of his work can be found on his website. 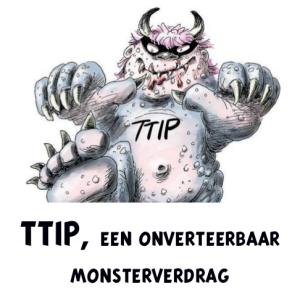 Brochure: TTIP, an indigestible monster treaty
This new brochure discusses the impact that the Transatlantic Trade and Investment Partnership (TTIP) will have on the food of European consumers. Politicians have already been busy for a few years negotiating this comprehensive free trade agreement between the European Union and the United States. Out of sight and out of the reach of European citizens the lobbyists of multinational companies are running overtime. The brochure was written by Susanne Maenen as part of an internship with ASEED. Download it here. So far there is only a Dutch version available. Volunteers for English translation are welcome.

New publications criminalization laws seeds and worldwide peasant resistance
La Via Campesina, international network of small farmers, and research organization GRAIN released a brochure, poster and map explaining how big business and governments are moving to stop farmers from saving and exchanging their seeds, and shows how farmers are fighting back. Continue reading.

Reclaim the Seeds 2015 busy and successful
– More than 1500 participants in the seed exchange and workshop programme at Kraaybeekerhof in Driebergen.

– Strong statement against patents on crops and market power of  agriculture big business.

It’s been a while since the Reclaim the seeds weekend took place, but we still want to draw attention to some reports. On February 28 and March 1, the beautiful estate Kraaybeekerhof housed the annual Dutch national Reclaim the Seeds weekend. Like the previous editions, it was a busy and lively fair. Besides stalls of the more professional ‘seed savers’, many other participants had selected saved seeds and brought them to the exchange tables. There are now several reports of workshops on the website of Reclaim the Seeds. On the website of ASEED you can find 4 picture galleries of the event.

Stop TTIP-citizens makes a new start
The European Commission has rejected the Citizens initiative against the international trade agreement TTIP. The NGOs involved will not give up and made a new start. Before October they need 2.5 million signatories. At the moment they already have 2 million. The TTIP political process was recently delayed again because there is too much resistance and division about the usefulness and necessity of this deal, both within the European Parliament and within the US Congress. Continue reading on the website of Stop TTIP and ASEED.

Marches against Monsanto
On May 23, hundreds of Marches against Monsanto took place worldwide again. It also happened in several cities in the Netherlands. In Amsterdam the TTIP trade treaty was the theme of the protest because Monsanto, being an American seed and pesticide multinational, would be the perfect example of how such companies would benefit from this agreement. TTIP is expected to have debilitating effects on all kinds of laws and regulations that protect our environment, food safety and animal welfare, but block multinationals from selling their unwanted products in Europe. More information and reports of the Marches against Monsanto on the Dutch MAM website and the international March against Monsanto site.

News on gentech.nl
This website, run by ASEED, reported recently on the patent on food. The European Patent Office has decided that conventional crops can also be patented. This is a serious development because the power of the patent holder on the crop, such as broccoli or bell peppers, is too big, and that’s bad news for smaller breeders, and for biodiversity and food security. Dutch organic sector organisation Bionext organised the petition Heart for Biodiversity calling for a stop to these developments in the seed sector. It was part of a European action of the Save our Seeds network. Recently, 17,000 signatures were presented to Dutch members of the European Parliament. Representatives of the Party for the Animals, the Christian-Democrats and even the Liberals promised to be work for adaptation of European patent law to limit patenting seeds.

Then there was more news about Monsanto: The evidence of harm caused by herbicide Roundup is piling up, even in publications in leading scientific journals such as The Lancet.
More GM news and backgrounds on gentech.nl

This year ASEED is going to carry a donor recruitment campaign to keep the organization afloat. There are now about 50 regular contributors and quite a few donations have come in. Thank you for those! However, we are still far from the 200 people who make a regular donation of for example 5€ per month. That is the number that ASEED needs to keep a solid ground beneath its continuing operations as a volunteer organization. So if you think it is important that ASEEDs pioneering function, critical informations, action camps, campaigns against developments like TTIP and seed monopolies continue to exist, then sign up as ASEED-donor today. More info on aseed.net/donate

On April 11 there was a benefit and donors-thank-party in The Pepper in Amsterdam. The proceeds were 500 euros, thanks to the efforts of the volunteers and Pepper band and DJs. Not bad, considering the stiff competition from other very nice events like the inauguration of the new political social center Nieuwland owned by the fledgling housing association Soweto. Next time we go there to have a ASEED-donors party.