The FLM, announced the action long in advance. Despite a double fence and fairly aggressive police action some managed with joined forces to replace GM potatoes with organic ones with a naturally resistant to the mildew disease. 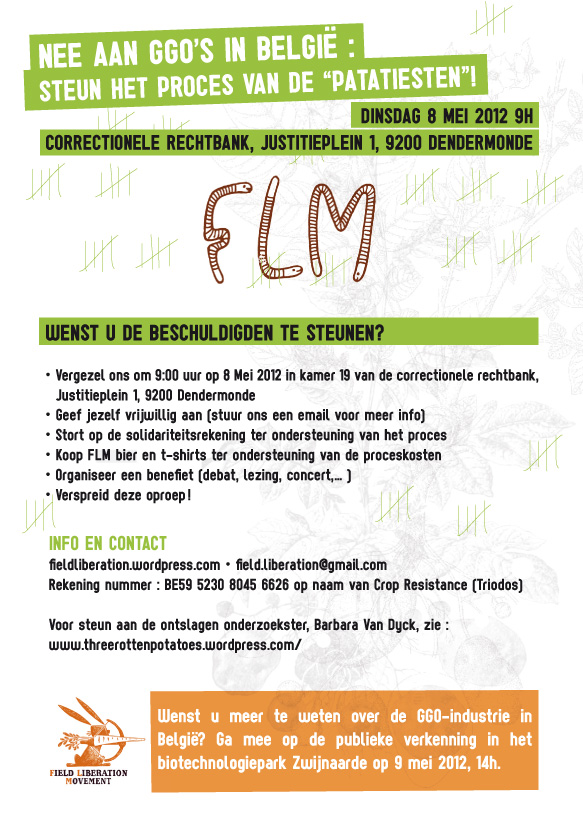 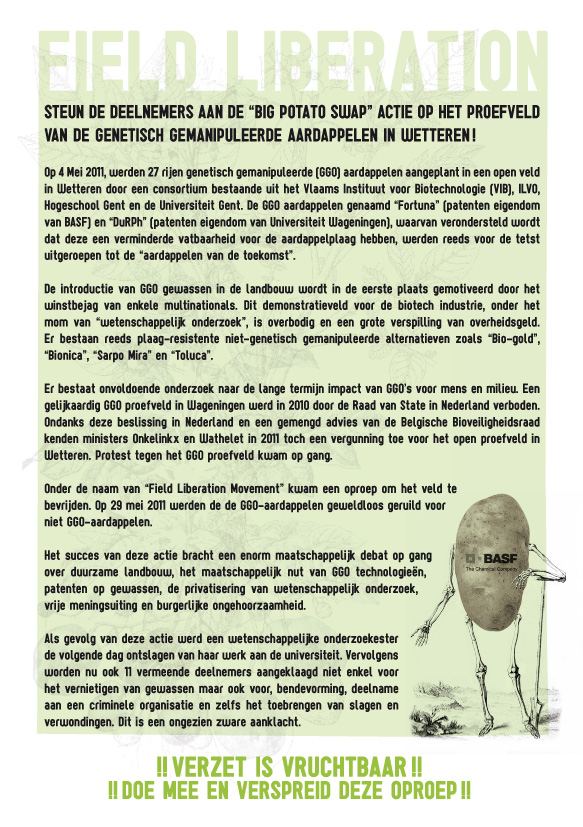 On 9 May, the FLM organises a peaceful Civil Inspection Visit to the Technology Park Zwijnaarde – Ghent. In these so-called Biotech valley are several biotech companies including Bayer and BASF located, as well as the Flemish Institute for Biotechnology (VIB). The goal is to gather information, through speeches by critical experts, but also by asking annoying, stinging, smart questions to the institutions. ASEED will participate in this action.

The great potato swap in 2011 significantly stimulated in Flanders the debate on GMOs. Not only the danger of growing GMOs in the open air (note next to bee hives), but also the position of the government and the Universities of Ghent and Leuven have been questioned. For the activists, it is clear that this field trial had no scientific aim, but served merely as an advertising object for BASF and genetic engineering in general. Now that the government chooses to prosecute on grounds of gang activity, it’s time to show that we do not want genetically engineered plants, not in the field and not on our plates!

On April 22 there will be an information night in Amsterdam for people who would like to know more about this case and who would maybe even like to go to Belgium to show solidarity.
Start: 19:00. Location:  Plantage Doklaan 8, Amsterdam.

If you would like to join us to Belgium on the 9th Join on the 8th or 9th of May, email info@aseed.net.

Read more? Interesting Dutch links about. Some backgrounds in English:
Barbara, fired by Universiteit van Leuven for being involved: http://threerottenpotatoes. wordpress.com
On the criminal trial and the actions in Belgium last year and upcoming May 9: fieldliberation.wordpress.com / field.liberation@gmail.com