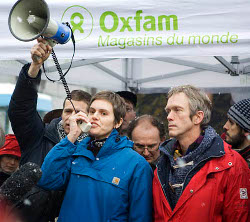 Join ASEED on a solidarity trip to Belgium: Monday 27th -Tuesday 28th May.

We are organising transport to Dendermonde, to support the 11 activists that are resisting the unjust sentences in the ‘GM potato trial’.[:]

And you are invited to participate actively. At the first hearing the defense team did not have the chance to present their evidence, their witnesses or to explain their action. Now their will be a Public Hearing, organised independently from the courthouse, in which we can all exchange our arguments and form our opinion together.  Citizens, farmers, researchers, and anybody else interested in the issue: bring your knowledge, experience and ideas.

We will be leaving on the evening of Monday 27th May, and returning after the trial finishes on Tuesday 28th.

Please send an email to madeline(at)aseed.net, to reserve a place in the van and somewhere to sleep.

As you probably know, the field liberators appeared before court on the 15th of January, but decided to leave it shortly after, since they hadn’t had the right to a fair trial where witnesses and video testimonies of the defense could be heard.
The judgement was then given by default, counting a fee of more than 25.000€, and 6 to 8 months of effective prison for five of them.
The defense having lodged an opposition to it, the trial is reopened.