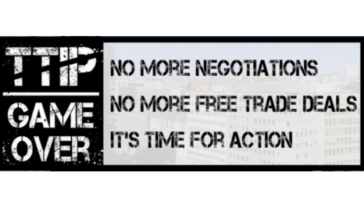 Beginning of July 2016 a series of actions were carried out by TTIP Game Over campaigners in Brussels. ‘TTIP Game Over’ posters were put up all over the city, meetings were disrupted and a Coca Cola billboard hijacked [1]. These actions follow last month´s protests which took place in several major … verder lezen