Mid-October, while the sun was still shining, ASEED joined the training weekend “Taking action to change food systems” organised by the “Peasant Action Brigades” citizens’ network and FIAN Belgium. FIAN Belgium and the Peasant Action Brigades, or in French Brigades d’Action Paysanne (BAP), co-organised this event from October 19 to 21 to gather people who want to support the movement for agroecology, while enjoying a nice alternative weekend in a farm. The idea was to inspire each other to take action, within one’s daily life but also within the BAP.

Let’s start from the beginning: what are the BAP? The Brigades are a grassroots network to support peasant farming and the movement for food sovereignty. Concretely, individuals can check the BAP’s agenda on their website to find events to get their hands dirty (by joining working days with a group in small-scale farms), to take public action (by participating in demonstrations, holding an info stall…) or to learn and network (by joining conferences, workshops or trainings). Farmers and organisations can use the website to announce a working day or a mobilisation. The name Brigades refers to the International Brigades created to fight against fascism in Spain in 1936. It is a reminder of the role of politics in the threat to peasant farming. FIAN Belgium is one of the organisations that supports the BAP. It supports the struggle for the right to food, from local to international level.

This training weekend gathered about 30 people from very various backgrounds and all ages: students in agronomy, social work or education, activists (from ‘beginners’ to professionals), regular or new BAP members, NGO workers, and citizens with a job totally disconnected from food and agriculture but who want to support peasant farming. We were lucky to spend these 3 days at the beautiful  Rainbow farm in Wellin, in the Belgian Province of Luxembourg.

The programme started with a presentation by Damien, from the NGO Quinoa, on agroecology initiatives and movement. Damien highlighted the connections between alternatives proposed by food sovereignty and agroecology, and other social movements such as climate justice, social justice, movements struggling against structural adjustment plans, and social dynamics against patriarchy. Can we therefore talk about a “food justice” movement, that would be aggregating and interconnecting all these struggles? The presentation also underlined diversity in transition dynamics: actions can range from local to global scale and from individual to collective level. We focused a bit on boycotting, one way people are sometimes called to take action. How many times have we seen on social media lists of foods to avoid because they contain “Monsanto products”? Well, considering oneself as a consumer is quite different from seeing oneself as a citizen. On the one hand, you have the right to buy or boycott products. On the other hand, you have the power to create alternatives. 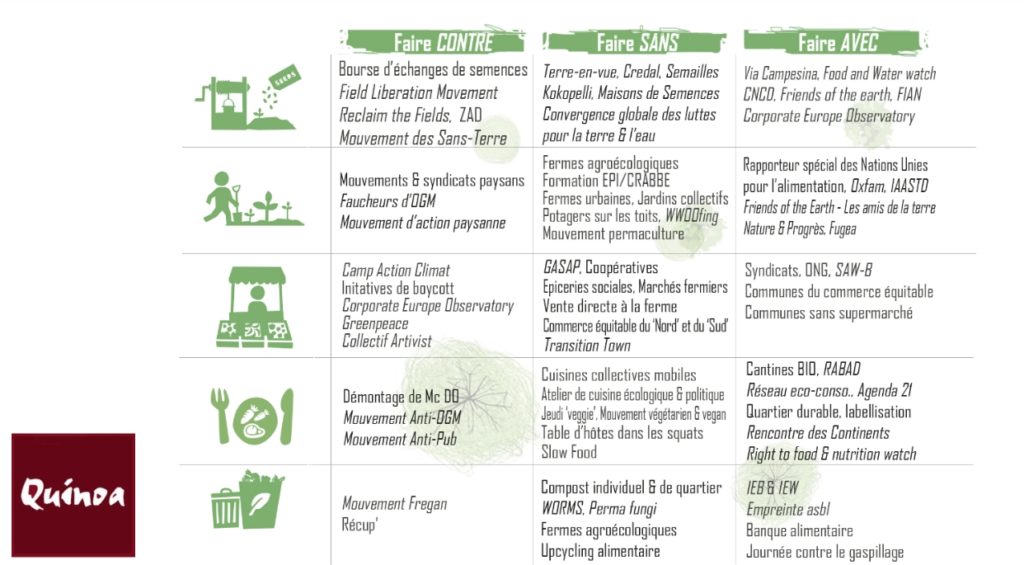 Finally, Damien spent some time explaining how we can describe different action strategies. One organisation, collective or individual can “do against”, in other words organise direct resistance, “do with” which means engaging in lobbying or dialogue, or “do without” and work towards autonomy. All these strategies are complementary, and one organisation can even combine the three of them in its work. Getting to know all these typologies and examples was quite eye-opening, and showed us the diversity of ways of action already existing within the food sovereignty and agroecology movement. 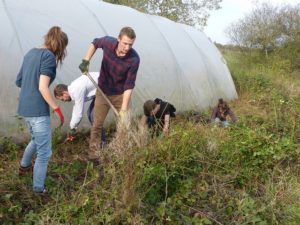 Several workshops also took place around the BAP. The goal was to involve all participants in becoming more active in the Brigades and in thinking collectively on how to strengthen the network. During the weekend, we also helped Serge, our farmer host. During two group working sessions, we attacked the thick crawling carpet of brambles trying to take over the space between greenhouses. Such work could not be done alone. However, in only 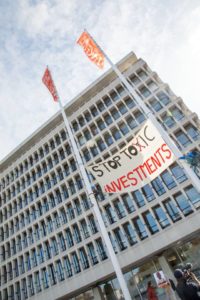 4 hours, we manage to claim quite some space back, and we got to hang out with Serge and listen to his experience as a small-scale vegetable producer.

After that, we took a nice break on the sunny terrace during which we painted a lovely banner, used on Tuesday October 23 at the action against the bank ING and its revolting greenwashing campaign on “sustainable investments”. All participants were invited to join the action, and this small activity was the opportunity for some of us to discover the links between land grabbing, the industrial food system and banks.

On Saturday night, two inveterate activists presented a very funny and thought-provoking act mixing storytelling and conference. Amaury and Sebastien told their personal story, for example how they became politically active, how they got to adopt a systemic approach, why they sometime question the usefulness of their actions…

The group also enjoyed a presentation and discussion on the connection between agriculture and climate, largely based on the brochure “Industrial agriculture and climate chaos” from our friends from Klima Kollectivet. A speed-dating was organised after the presentation with 4 collectives, including ASEED/Fossil Fuel Agriculture.  Participants moved from one group to another to learn about various initiatives and get to know how to get involved.

The connection between climate change and agriculture is already widely discussed in Wallonia, for example in the coming workshop day “Agriculture and climate change: what are the stakes and actions?” On November 15th, close to Brussels, this event will gather former UN Rapporteur on the right to food and Chair of IPES-Food O. de Schutter, climatologist P. Marbaix, a representative from the French farmers union Confédération Paysanne and Belgian FUGEA, but also local farmers and activists. The programme includes presentations and workshops to forge alliances, to discuss strategies and policies and to share good practices. The event (in French) is open to everyone.

Overall, it was a very social and dynamic weekend, where participants had the chance to get more familiar with various ways to take action to support food sovereignty and agroecology. Organisers put the stress on strengthening the BAP and doing non-violent direct action, providing various opportunities to get directly involved. To ASEED, this time was quite inspiring since we could see the diversity of initiatives in Wallonia to support peasant farming and alternatives to the industrial food system.

ASEED will continue following the agroecology and food sovereignty movement in Begium, and spread the message about the Fossil Free Agriculture campaign with fellow activists. If you speak French and are interested in joining networking events like this one on behalf of Fossil Free Agriculture, please get in touch with us and join the next open campaign meeting. 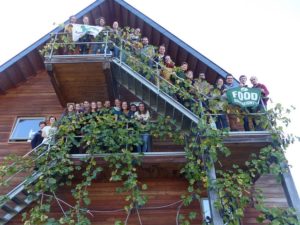