On Saturday, the 13th of October, people from all over the world joined forces for the “Global Gas Down, Frack Down Day of Action” to protest against gas extraction and fracking. ASEED also took action by supporting the student organisation Fossielvrij Groningen.

“These peoples’ lives are in limbus”. Chris Ashford is standing on the grounds of the Groningen fish market looking over the crowded square, where people spend the sunny Saturday morning buying fresh fish, meat and vegetables. By “these people”, Chris is not talking about them. “It’s the people in the province who are mostly affected by the gas extractions. The inhabitants of the city barely know anything about the consequences”. Chris did not come to the fish market today to buy groceries, his intention is much more serious – and much more important. As part of the student organisation Fossielvrij Groningen he is supporting an action against gas extraction and fracking, a method of extracting hydrocarbons from the ground by injecting liquid at high pressure into it. ASEED EUROPE joined the action to support our combatants as well as the people affected by the gas extractions in the provinces. 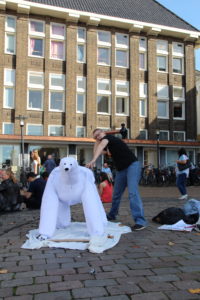 There is probably no better place in the Netherlands than Groningen to protest against gas extraction, since there you can find the biggest gas field in the country. With a playful action the activists of Fossielvrij Groningen created awareness on the fish market in the city. They created miniature versions of a drilling platform, the Martini tower – the sign of the city, as well as a polar bear – the global symbol for climate change, and asked people to smash the figures with inflatables hammers.

With this playful approach to a very serious topic the organisation sought to create awareness for the consequences of the ongoing gas extraction in Groningen, which have resulted in earthquakes damaging thousands of houses around Groningen. “The lives of the families in these houses is continuing, but it’s never going to be the same again. That is”, he says, “first and foremost due to the costs of disruptions that the people need to bare as well as the decline in property value which makes it impossible for them to sell their houses without a great financial loss”.

“The problem is that the gas extraction companies only aim to cover the disruption costs of the property, but don’t account for the devaluation”, he continues. Even though the government has announced that gas extraction will be phased out by 2030, Chris still points out how important an immediate stop of this energy generation is, since the earthquakes can still occur for up to 50 years after the last extraction.

What the activists from Fossielvrij Groningen mostly criticise is the lack of knowledge within the city of Groningen. “With an action like this one today, we try to create awareness and form a public opinion that eventually can lead to political action. Of course, we also want to show solidarity for the people affected by gas extraction and fracking”, says Manon Heerts, a member of Fossielvrij Groningen and one of the initiators of this action. 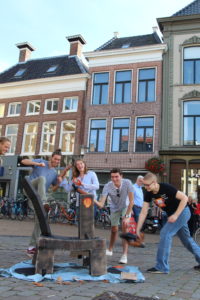