After a lot of criticism from a broad range of civil society groups the European Commission decided in september 2008 to add a review of the 2020 agrofuel targets in 2014. But the 5% target for 2015 is there and it didn't slow down the current growth of the use and productions of agrofuels. Also the surface of monoculture field planted with energy crops, like soy, oil palms and sugar cane, is still expanding rapidly. The letter to the European Commission below is giving a good update of the agrofuel developments at the EU level.

Why the production of agrofuels offers no solution to global climate problems, but rather creates and intensifies already existing  social and ecological problems. With cases about sugar cane in Brazil, soy in Paraguay and oil palms in Colombia.

The nature protection organisation WWF and the Dutch development organisation Solidaridad are still continuing with the Round Table on Responsible Soy. This is not as positive as it sounds.

Agrofuel (often called biofuels0 is often in the news, due to instability in oil producing areas, high oil prices, dwindling reserves and also because a few countries want to do something about climate change, at least in theory. After all, it would be great if we could use all sorts of plant materials to make useable fuels. Many governments, including the Dutch, want to promote its production and use, partly by lowering excise duties on it. The European Commission wants to subsidise the cultivation of sugar beet for ethanol and lower the import tariffs for bio fuels. Car producers are working on models that can run on all sorts of alternative fuels. 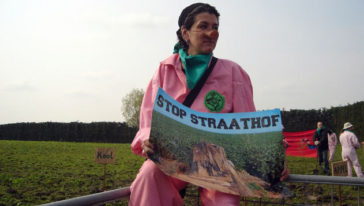 Guerrilla Gardening in the Dutch Betuwe: Animal industry equals animal suffering, climate disaster, and deforrestation. Friday April 17, 2009 – 40 activists of the group ‘Stop Straathof’ made a vegetable garden on the terrain where agro-industrialist Straathof plans to expand one of his many pig farms. The action was a … verder lezen

Because of the increasing production of soy in South America millions of hectares of rainforest  and savanna are being destroyed. For this reason WWF started a campaign for sustainable soy production. The disappearance of forest and savanna is definitely a big disaster, but in the WWF initiative, many crucial issues are being ignored or put aside:

A SEED’s soy campaign questions large scale soy production in South America and supports sustainable and local food production in Europe. The campaign has the following goals: To inform the general public about the social and ecological effects of the massive soy production in Latin America; land conflicts, violence, rising … verder lezen

"Stop! The UNFCCC is going off the rails!"
Call from Via Campesina for the Climate Summit in Copenhagen, December 2009

The coming months there will be a lot of attention for climate change. Also A SEED's soy campaign is busy with this issue. The emission of climate gases is one of the main arguments against the production of meat and dairy products. In the coming months we hope to get attention for this relation and for the alternative ways to produce and consume food in a sustainable and social way. Off course also the other sources of pollution are important for A SEED and we support climate actions against roads, coal power plants and flying (NGO) people as well.

Here you can find a call from the international network of small farmers' organizations Via Campesina.

Tuesday 19 May, 2009 –  Today, the head office of WWF-Netherlands received some extraordinary visitors, including a weeping panda, a Monsanto circus director, and various people in white overalls spraying "Roundup". The action is a protest on the occasion of the upcoming vote of the Round Table on Responsible Soy (RTRS), on 28 May in Campinas (Brazil). This forum will allow GM RoundupReady soy to be certified as 'responsible', while in reality, this soy is responsible for massive use of pesticides as well as deforestation and driving small farmers from their lands.

Amsterdam on November 25 and December 1

By now more than 10.000 protest emails have been sent to the Dutch government by you and our allies from The Netherlands and abroad. Youhou!. The action will continue untill the end of November. All signatures have been handed over to the Dutch Minister Verburg of Agriculture at the Conference on social economic aspects of GMOs helt by the ministry on November 25 and 26.

What this petition action is all about we have all been able to read on www.toxicsoy.org. But if you want to see it more lively illustrated with some video letters from Soy Hell Central aka Paraguay and hear the latest updates, come …….