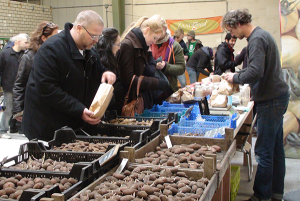 The second Reclaim the Seeds weekend took place from 2-3 March 2013 in Den Bosch. Saturday’s seed exchange was busy, and the workshop programme was a success. [:]During Sunday’s ‘do day’, participants planted seeds, made signs for gentech-free zones, and greened the streets of Den Bosch with a guerilla gardening tour. Stall holders and other participants were enthusiastic, and the organizers were pleased with the results of the weekend. The public was very diverse, and a great deal of information was exchanged. There was attention for both the political as well as the practical side of the preservation of agricultural biodiversity, and seeds were freely exchanged without the interference of big seed companies.

The origin of our food has received increased attention over recent years. More and more people are beginning to produce their own food. This is an interesting trend at a time when small-scale and traditional agriculture is increasingly under pressure. Fortunately, awareness is also growing about the fact that a great diversity of crops is not only a cultural heritage and culinary treasure, but is also of great importance for sustaining an agriculture that is resilient in the face of pests and climate change. An extra motivation for the Reclaim the Seeds collective in organizing this weekend was that important political decisions are being made in 2013 about how our food will be produced in the future. The European Commission is currently working on a new agriculture policy, and it is expected that the course will be set by this summer for the coming years.

The European Union is also busy with new seed legislation. The plans have stirred up a great deal of criticism because they will further erode the position of farmers, gardeners and growers who save and exchange seeds from their own crops. Seeds from crops that have proved useful for generations are eradicated from this framework: only seeds that conform to strict, industrial criteria will still be allowed on the European market. On the other hand, the possibilities for patenting plants and animals will be extended. According to the new European Unitary Patents, patents must be organized on the European level, and exceptions on the national level will no longer be possible. There is scarcely any democratic control over the processes and decisions of the European Patent Bureau, and the possibility of appeal is likely to be abolished. Although having the undemocratic EU and profit-seeking multinationals as opponents is not easy, it does serve a motivation to plan the next Reclaim the Seeds weekend!

This year’s seed exchange was nearly as busy as the one in Amsterdam in 2012. It did however prove more difficult to bring seed saving collectives from neighbouring countries to the Netherlands. This is mainly because there are more and more seed exchanges being organized in Europe, and priority is rightfully given to activities closer to home. On the other hand, there were a number of new stall holders from the Netherlands.

The workshops on Saturday about propagating your own seeds and permaculture were overflowing, and many visitors were interested in learning how to promote biodiversity in their gardens. People who came primarily for the seed exchange also followed one or more workshops.

The presentation about the change in European Legislation was also well attended. A number of participants want to support the European campaign for seed sovereignty in the Netherlands and take a stand against the revision of the seeds legislation. The meeting of Dutch ‘seed savers’ will also most likely be continued. Following the presentation of an overview of inspiring projects in France and Belgium and an inventory of existing activities in the Netherlands, it was concluded that the existing ‘Eeuwig Moes’ network can likely be broadened to include motivated hobby gardeners.

Another red line through the workshop program was the resistance against genetic modification. In the European Union, the threat looms that GM potatoes will soon be permitted for planting, a development in which the University of Wageningen is playing an important role. This series of workshops examined the arguments against gentech, the current state-of-affairs in the Netherlands and in the EU, A SEED’s gentech campaign and the possibilities for municipalities to declare themselves GM-free. In any case, it is a subject which we’ll hear a lot about in the coming years.

As expected, Sunday was a bit calmer and more relaxed. The day began with a presentation about growing food with seeds you save yourself and a number of practical workshops. Everyone could also help with the preparations for the guerilla garden tour through Den Bosch. This procession included stops at a new food forest and a park which may have to make way for an expensive apartment complex. Seed bombs were launched in the direction of beds, fields and other green spaces that could use a flower or two. A grass field was transformed into a garden with raspberry bushes and strawberry plants in about a half an hour. Cold-tolerant crops like fava beans were sowed, and local neighbours volunteered to take care of the garden.

Following the first seed exchange in 2012, a strategic choice was made to organize the festival in another city the following year in order to reach a new public. Den Bosch was chosen because various people from the city were willing to help. And it was once again clear this year how crucial local support is in the organization of such an event. The ‘ReperatieStraat’ where the seed exchange took place is normally a place where people can bring their broken belongings to fix or get fixed, but for this weekend the building, the surrounding spaces, and the Boschveldtuin (community garden) were a good location for the activities on Saturday. There was also cooperation with the squatted social centre Knoflook (Garlic), the community garden project Graafsehof and the many homes where people from outside Den Bosch could sleep. The weekend brought visitors from all parts of the country, and even from beyond the Netherlands. Hopefully yet another Reclaim the Seeds weekend will take place in 2014, and we will again met such enthusiastic participants.

The Reclaim the Seeds weekend was organized by an informal collective including a number of people who were also involved in the organization in 2012, and a number of new people, mostly from Den Bosch. The involved organizations this year were ASEED, Transition Town Den Bosch and Transfarmers.

It has not been discussed whether there will be another seed exchange weekend or different activity. This will be decided upon by everyone who wants to go further with Reclaim the Seeds. Maybe you also want to contribute? If the exchange and planting of self-saved seeds becomes punishable, it’s certainly important that we continue en masse! Reclaim the Seeds!

More about Reclaim the Seeds you can find on http://reclaimtheseeds.nl